9 Homemade Cameras Worth The DIY Effort Image by Lucus Landers. Featured in our post on his new monorail camera.

All images taken from our original interviews with the photographers.

Think that creating your own camera is too much work? It isn’t at all. In fact, creating your own cameras can be fun and can give you an experimental and creative edge that make you think differently about the way that you see images. Most of these cameras can be large format–or as is the case of many of the photographers that we’ve interviewed, a custom format. Before you continue on, you should first check out this video that is an introduction to large format shooting. You’ll see what a photographer needs to do in order to get the photos that they want.

Here are some Homemade Cameras that you’ll get inspired by.

A 6×14 Camera for Landscapes Lee Lira is a photographer based in Melbourne and became obsessed with creating his own cameras. His tinkering lead him to the conception of a couple of 6×14 cameras which is a format that landscape photographers would love.

“Made from European oak with a Schneider 135mm f/5.6 Compur P shutter & a Graflex viewfinder, fixed focus. The film transport parts were from a Horseman 6×9 express back.”

Check out the interview. Photographer Chuck Baker has gone to garage sales for years and collected loads and loads of old school photography gear. One day though, he got the idea to use an old film enlarger and turn it into a camera. The device shoots 5×7 photos, but Mr. Baker also owns a 20×24 camera that shoots monstrous images.

Focusing something this large is very tough, but it will give you images that no 35mm full frame DSLR can deliver unless there is a lot of panoramic stitching involved.

“The camera was actually intended for use with an ortho film that I use that I’ve rated at ISO 6. When shooting the first paper negative, which is technically rated ISO 25, I “mistakenly” metered for ISO 6 and got a good result. I have found that when using this camera in difficult light situations that bracketing, starting at ISO 6 up to ISO 25 in full stops, yields good results. I tend to lean towards the slower ISO in addition to using a 1.5 multigrade filter while shooting to maintain detail in the final shadow areas without highlights being completely blown out. This way I can burn in the highlight detail while keeping the shadow detail when printing the final.”

The Pinhole Camera Made from a Beer Can Photographer Matt Bigwood created one of the greatest pinhole images that we’ve ever seen. The story of how he did it though is even more incredible. Matt created a pinhole camera from a beer can and positioned it in a place where it could capture a scene for a period of six months. Occasionally, he’d go to check up on the camera to make sure that it wasn’t tampered with and that it was still in working order. But the nerve wracking wait for that long is partially what makes the story so great. The icing on top is when you actually look at the image. One of the panoramic medium format ratios is 6×9 and 6×12–but not many people shoot 6×19. Photographer Eirik Russell Roberts decided to build one himself after seeing images shot with something of this size.  In our post, we state:

“While technically working, this camera — which took him roughly 40 hours to build — was far from perfect. For one, due to the raised viewfinder, parallax was enormous. Then, a light leak was ruining most of the pictures of the first test roll. But most importantly, Eirik was not able to achieve correct focus, due to the lens not being at the correct distance from the film plane. Eventually, he was able to eliminate all the issues and came up with a fully functional, versatile and ergonomic 4×5/6×12 camera.” When we saw the images that came out from this 16×20 pinhole camera, we were really awe-struck. Designed Roger Cline decided to make one and shoots out in the West Coast of America with it.

“The aperture is at around 290 something using an aluminum can and I use Ilford MG Satin finish for my negatives. For a single exposure it takes about 6 minutes worth of sunlight (at high noon) and as with most pinhole cameras, you get one shot. Once I process my exposed negative, I create a contact print using a soft white incandescent light bulb.”

The Cameras of Lucus Landers 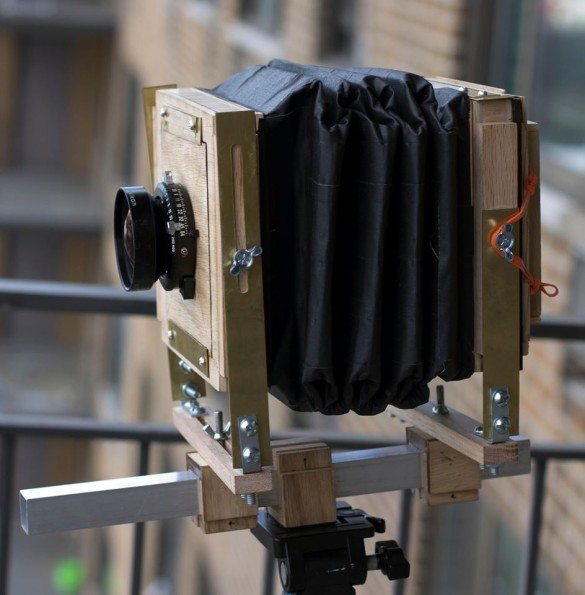 New York-based creative Lucus Landers loves to build his own cameras. He’s built two different 4×5 cameras: one being a Polaroid and the other being a large negative camera that was put together on a shoe string budget. Lucus uses the old school bellows system along with rails the way that most large format cameras do; and he finds ways to create beautiful images from his creations.

Who would have thought that a shoe box could actually create an awesome camera. Indeed, this pinhole camera is a shoebox and uses massive film to capture the world that it sees through a very narrow aperture of f90.

“The goal of this project was to create the most simple camera of the world. A shoebox, a small lens, black paint and photo paper. No viewfinder, no adjustment, no shutter (only a piece of scoth tape over the lens.) Just a black box.” By far, one of the coolest cameras that we’ve seen is this homemade rangefinder camera that shoots 4×5 film. 4×5 is considered large format and it focuses with a rangefinder: which can be tough to find. But photographer Dale Rothenberg created one using parts from three other Polaroid cameras.

“I used parts from three polaroid cameras in total. I found some basic instructions online, and was able to talk with someone who builds these cameras professionally, so I had some help. Still, parts of the camera like the lens board, the back of the camera, and the integrated cable release were completely original and involved a lot of trial and error.”