All images by Roger Cline. Used with permission.

Large format pinhole cameras create some of the most beautiful and haunting images of our time with little post-production work. When you hear about a pinhole camera, you usually think about a beer can, or an enlarger, or some other cool contraption. Usually, these images are small to medium format and sometimes you’ll spot the occasional large format. But rarely do you find something as large as 16×20 pinhole camera? Roger Cline has created one, and when using in conjunction with his design background, they create beautiful, ethereal, and mind blowing images together.

The camera was hand-built and uses paper negatives at ISO 6 or 8. And trust us, there is a lot of work that goes into a single image.

Phoblographer: Tell us about the camera and the 16×20 film. We’re assuming that the film was custom made as is the camera. Roger: For the past few years I’ve been shooting this hand-built 16×20, paper negative pinhole camera. I developed the plans for the camera a few months prior to visiting my parents house, and my dad being the handy man that he is helped me build it when I was there for a visit. The aperture is at around 290 something using an aluminum can and I use Ilford MG Satin finish for my negatives. For a single exposure it takes about 6 minutes worth of sunlight (at high noon) and as with most pinhole cameras, you get one shot. Once I process my exposed negative, I create a contact print using a soft white incandescent light bulb. Phoblographer: What is the setup for a photo like this? It surely requires scouting locations.

Roger: It does take some time to scout locations, though most of the time I have a pretty good idea of the place or subject I want to shoot and I do what I can to get my equipment and subject matter to work together. Though with this type of photography it also takes some luck, especially after you first build a pinhole. Primarily, when you first start shooting with a new camera it is tough to visualize the angle of view until you shoot a few negatives with the camera. After that you can get a pretty good idea of what you are going to get. Naturally there are always surprises when you process your negatives. When I was shooting the Golden Gate, I didn’t think there was any way I was going to get the entire first tower in the frame. I was standing there at the base of the water and it seemed like I was looking straight up to the top of it. To my surprise, when the negative came out of the developer, it seemed to work out fine. I’m blown away how wide of an angle you can get with one of these cameras while still keeping the edges of the photo from barreling in.

Phoblographer: What is the aperture on the camera (since there is no lens) and the ISO on the Ilford paper?

Roger: f290 something and I believe Ilford paper is rated at iso 6 or 8.

Phoblographer: What attracted you to the scene to photograph it?

Roger: I grew up in the midwest and had only seen the Golden Gate in photos and on television growing up. It wasn’t until I was 30 or so, until I saw it with my own eyes for the first time. The scene is perfect for a pinhole shot, the bridge is stationary and you have a beautiful backdrop of the Marin coastline. The water in the bay is rarely calm and I knew that by taking a long exposure it would add an interesting perspective to the scene by making the water as smooth as glass. So one morning I loaded up my camera and head down to see what would happen. It is about a 4 hour round trip drive with no traffic, but this day it took longer. It is definitely the furthest I’ve traveled to shoot one solitary photo.

Phoblographer: What attracts you to pinhole photography?

Roger: I own a graphic design studio, the nature of the business requires me to be obsessively detail oriented in my work. It also requires a large number of hours in front of a computer, both of which I enjoy. Pinhole photography and analog photography help liberate me from digital technology and allow me to utilize my creativity in an entirely different medium. As a photographer I strive to keep learning about the photographic process and my self as an artist. 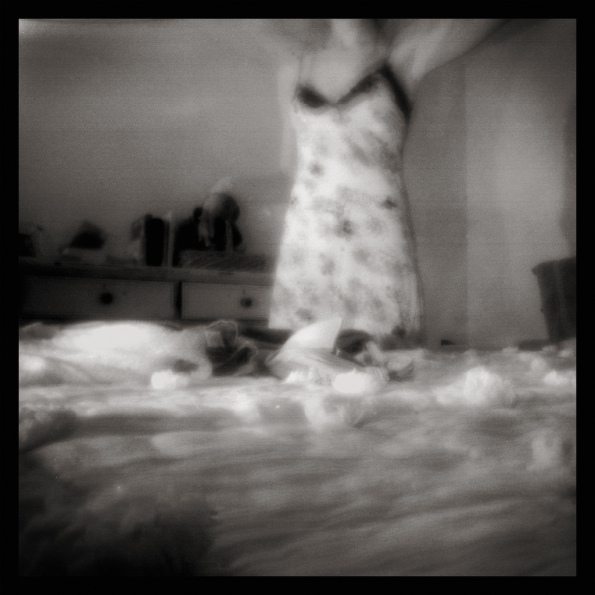