Sometimes we don’t want to bring a point and shoot, mirrorless camera, film camera, or DSLR with us. And at those times, we’ve often been good enough with the results from our phones. Indeed, when we tested the Apple iPhone 4’s camera, it performed very well. While the iPhone users have their fun with Instagram and Hipstamatic, the closest thing that us Android users (whether using HTC Smartphones or others) have had for a while was Retro Camera (which has undergone many changes since our review.) Enter Pixlr-O-Matic for Android: hands down the single app that is killing my battery due to my absolute addiction.

First off, this app is just an Android version of this site, but where it belongs is on a phone. This app in part stems from Pixlr, the online editing software. However, those aren’t the main features of Pixlr-o-matic. This app is all about having fun and getting all of those retro and kooky lenses and looks that iPhone users can get digitally.

Of course you could always get a Lomography La Sardina or use something like a Yashica Electro GSN, but then you’ll need to develop the film. Indeed, this app is all about being spontaneous—which is one of the pillars of Lomography and the lo-fi life in general. Plus, you won’t have to shoot an image with your DSLR and apply the film presets afterward. Pixlr-O-Matic starts off with the interface screen that allows you to either take a photo, edit an existing photo, or edit one of a couple of photos that the company provides for you. With that said, you may want to install this app and then move it over to your SD card because it is 10MB + worth of space.

Once you take a photo, you are brought to a new interface where you can choose special styles for your photo. The parameters that you can manipulate are:

– The Film Look: choose the type of film it looks like. Each one is named after a person; though I’m not sure why. Some look cross processed, others look like black and white film, and others like things I can’t totally explain. It’s all cool and in the name of fun though.

– The Edge: Choose what edge you want the photo to have. Perhaps look like a Polaroid, or an old film negative, etc. The choice is all yours.

After this you’ve got a couple of options. You can share the photo via your favorite sharing service associated with your phone, save it to your SD card, or head back to editing.

Here are a couple of photos shot with this app: 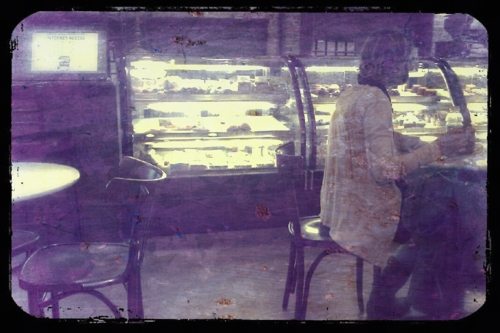 So why is this app so addicting? Because it’s so fun to use. The fact that you can take the photo and then customize it to have loads of different effects and looks just opens up your creative freedom possibilities so much. Accepting that you’re shooting with your phone’s lo-fi abilities also helps you to let go of any apprehensions you may have about the photos. Indeed, using this app is all about being spontaneous.

Are there any down sides? It can take a little while to export my image to my SD card on my HTC MyTouch Slide 3G. Plus this isn’t a small app to download. At a little over 10MB, I highly suggest using Android Task Manager to move the app to your SD card instead of your phone. When being used, it doesn’t take up too much of your RAM either.

Want to see more? Check out my Tumblr. I’ll often post images from this app there.