The Yashica Electro 35 GSN is a rangefinder camera that I personally purchased and that has been a dear love of mine since for street photography. After testing the Leica M9, M7 and the Fuji X100 (though the last is not a rangefinder), there were a number of reasons why I made the purchase. Besides the affordable cost combined with sharp lens, wonderful metering, and ease of use, the camera is built to last. But is it for everyone? 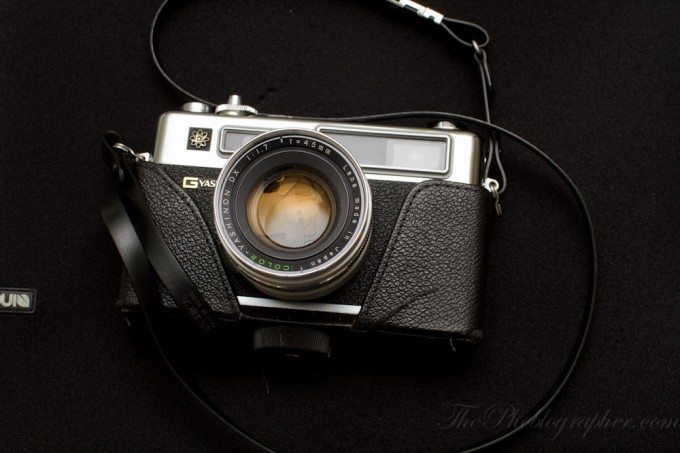 are much smaller. However, the camera houses the equivalent of a full frame sensor: 35mm film! Yes, this is a film camera. The front of the camera is plain and simple. There is a lens, the rangefinder, the meter and nuclear symbol. When you look at the top of the camera, you’ll see some serious business going on. One has the film advance lever with the film counter next to that. Then there is the shutter release. To lock it, one just needs to turn the dial to the locking position. This essentially turns the camera off in some ways. The shutter button is threaded to accept wired releases. Next to that is the ASA/ISO setting. This is by far one of the best ways I’ve seen it presented. Not only is it easy to access, but difficult to change and therefore throw off the camera’s metering.

Next to that are the Over and Slow lights. You’ll see this in the viewfinder, but that will tell you when the camera is overexposing or you’ll be shooting at a slow shutter speed. To compensate for these accordingly, you’ll need to adjust the F-stop until you reach a balance. In fact, the camera is Aperture priority only unless you switch to the bulb setting.

Next to the lights you have the hot shoe and the film rewind lever.

On the lens you have the apertures, the focus (with distance scale for hyperfocal length shooting) and some extra settings such as auto shutter, bulb or high speed flash sync.

How to Use One

First off, note that there is a major quirk to loading the film. In most cameras when you load the film, it wraps around the advance spool in a clockwise fashion. In the GSN, it goes counter clockwise with the advance still pushing it clockwise. This helps to protect your film if the back opens up, though not by much.

Focusing works exactly like a Leica or Voigtlander Bessa rangefinder. If you want to see how that works, check this out.

When you’ve taken a photo, you just need to advance the film. When you’re all out of film, you pop the button in on the bottom of the camera and rewind the film in the direction that the film rewind tells you. After you’re all done, just pop the back open, take the film out and reload.

A quick word before I go on: there is no advance lock. So if you advance the film once, and then advanced it again without firing, it will advance the film and you will have lost an area of film that you could have shot on. Most photographers that use this camera will most likely keep it stopped down as the manual focusing will mean that you’ll need to take extra time to get the photo. To take the maximum advantage of this camera, you’re best off stopping it down when outside and often being aware of how far you’re focusing out at all times. When you see a scene that you love, just get right up to it and snap it. If you don’t want to pay attention to the camera’s meter, consider the Sunny 16 rule. However, I’ve seen from my film prints that the metering is actually quite good and very accurate. However, there is a problem. I really wish that there were an exposure lock function so that I could focus on one part, meter for the other part, recompose, and get a better exposure.

In the scene above, I had to focus on the woman in the dress and then recompose my image. To focus on her, I had to put the circle in the middle of the viewfinder over her. The problem is that when I recomposed, I was no longer metering for her but for another area. That’s a huge bummer because this image could have been much better. At other times when you meter for what’s in the center, you’ll often have perfectly exposed photos. Kodak Porta 400 VC

is a wonderful film and has a great look to it if you expose your subject correctly. Metering in low light when centering your subject is also very accurate. For the most part, this lens is very sharp and when stopped down, only good things can be said about it. In the photo above, the lens wasn’t stopped down as much and was probably open to f1.7. The lens can be softer then. But in addition, try to hold still especially if the meter is telling you that the exposure will be slow (as it did in the photo above.)

Most of the time though, you’ll often be very impressed by the image quality when combined with good film. This photo was once again taken with Portra. This photo was taken with expired Kodak Gold 100 (5 years.) However, the image quality still looks quite good. That’s partially a testament to how good the Yashica’s lens is. The bokeh of this lens is okay. I wish it were creamier, but everything that is out of focus is still pleasing and not harsh at all. When you use Lomography 800 film

you’ll need to remember that this isn’t digital and that film grain will be there. Said graininess may take away from the sharpness of the images. In my eyes at least, I felt that the lower ISO films were plenty sharper. However. 800 film will be essential for bars with low light. You’ll still also need to shoot wide open, which will add to your image’s softness. With that said, I wish that the Yashica’s lens were even faster.

So is the Yashica perfect? No, but it’s still very close to it. Called by many to be one of the best film rangefinders ever made, the Yashica Electro 35 GSN is easy to use, delivers sharp images, is portable, tough, and quite attractive looking. In terms of image quality, it can deliver some very good images if you choose the right film. I would not suggest using it with chromes because of the fact that you really need to nail your metering on that part. For those, you’re best off shooting full manual and this camera doesn’t have that.

For the street photographer that wants a rangefinder but that doesn’t want to dish out the money on a Leica, you’ll be in luck. The Online Photographer stated that one should spend an entire year shooting with one film, one camera and one lens. If you were to do that project, I’d recommend this camera. The 45mm focal length can handle nearly anything and the lens can also deliver some very stellar images.

However, if you’ve become spoiled by the more manual settings of a DSLR like exposure lock, you’ll be yearning for those features to help you create better photos.

But can you really complain for the price? I’d deem you crazy if you did.