The Fujifilm GFX 50S has been in for review for a few days now and I’m sort of wrapping my head around how to test it correctly. That’s kind of tough to explain for many reasons. You see, Fujifilm sent me the camera along with the 63mm f2.8 and the 120mm f4 lenses–both primes which are great for general work, portraiture, and the mainstay of most medium format photographers out there. Zooms are often tough to work with, but in some ways I feel like Fujifilm is genuinely trying to redefine the way people work with medium format cameras, lenses, and sensors.

Before you go on, PLEASE, PLEASE PLEASE PLEASE PLEASE KNOW that this isn’t my review. My review is coming still. I don’t want the editors@ email address flooded with messages saying “I read your review,” when my review isn’t finished. I’ve completed my first impressions and this is an extension of that report. Let’s start to examine this a bit. First off, if you’ve been reading this site for a while, you’ll know that even before Fujifilm and Olympus started the retro-camera trend I was into shooting film due to how the ergonomics of cameras like the Yashica 35 Electro GSN, amongst many more, simply worked. I was married to a Bronica ETRS and 75mm f2.8 for a time. That camera shoots 120 film in the 645 format. To that end, the film is of course truly 645; the digital cameras of today that say they’re full frame 645 are off by just a bit. Digital or film aside though, the thing about film is that it slows you down and therefore forces you to put an emphasis on getting better photos that digital simply does not promote in any way possible.

Can you do it? Yes. But even as I was working with this camera on this particular studio session with Amanda for around five hours, I brought back more images than I’d really like. Where I’d traditionally shoot perhaps no more than 10 rolls of medium format film which would give me 80 images at 6×9 and more than that at 645, I ended up shooting around 430 images. Still not bad when you compare what I’m doing to most digital photographers these days, but I don’t like shooting that way. It promotes carelessness from both me and the subject. We tend to get less creative because “it’s digital”.

You can’t really force it with digital, but you can with film for obvious reasons. This in turn leads to the super slow workflow that I’m forced to endure in Lightroom because Capture One refuses to support the GFX (which I hope they eventually realize could be one of the worst moves they make as a company). Even when I shoot personal projects, it’s not uncommon for me to come back with less than 20 images because I know exactly what I want. I completely understand the idea of overshooting, but at what point does it become pure carelessness? And in general, I believe photographers have allowed themselves to simply be careless due to the ease of use with digital when we should all aspire and strive to be better and get what we want in a few photos. That statement has to do with personal projects you care about and paid commercial work. If you’re shooting for fun, then do whatever you want. To that end, Medium format has always been more of a creator’s tool vs one designed for capturing scenes as they happen.

The bigger point here though is that, on the contrary, other medium format digital cameras I’ve tested have a feel of seriousness to not sit there and simply mess around or overshoot. However, all cameras at the same price point of the GFX 50S sort of encourage that philosophy. The 1D X Mk II, the D5, etc. The only one that sort of doesn’t is the Leica M10, but it’s also got a sensor designed to be pushed for forever. All of these top end cameras have very high frame rates but not with the same resolution of the 50S. The thought process for a while has been that you can overshoot, but also know you’re going to spend that much longer editing the files and going through the work because they’re indeed that much larger. With the GFX 50s, Fujifilm is trying to take something traditionally meant for masters, so to speak, and let others sort of have their excess. Very personally, I’m not sure how I feel about this and how it will affect the high end pro market. I hope that Fujifilm does well, but I also wonder how it will change the way pros shoot.

What I’m Liking About the Camera 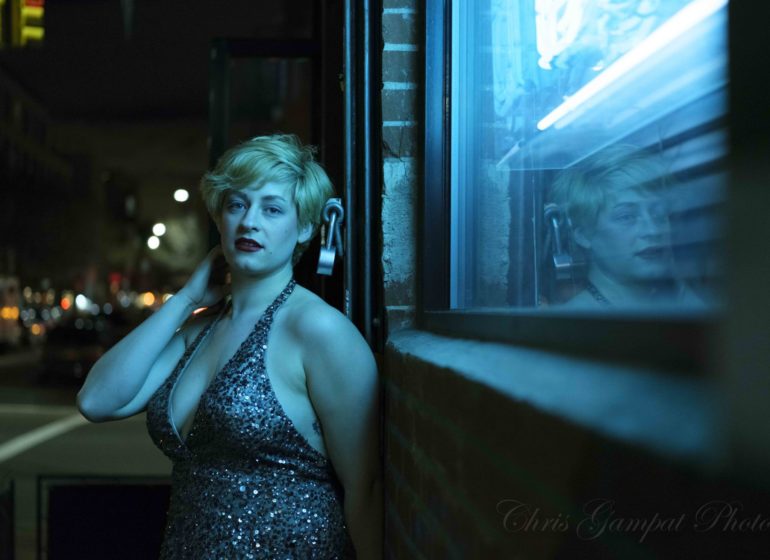 Despite my initial thoughts in not having the most positive outlook overall, the Fujifilm GFX 50s is an absolutely fantastic camera. The versatility is great if you wish to use the viewfinder or the LCD screen. I thought I would hate the large size. I don’t at all. I thought I’d really abhor the weight when using it for a while. That still hasn’t happened–and in fact my Canon 6D and large Sigma lenses have caused me more pain before.

If you’re a Fujifilm user, everything will look very familiar. And for those of us (myself included) it’s almost like I’m coming home to a bigger extension of my family. It’s pretty awesome. Then you have to consider the image quality–which is really quite good both in the studio and in natural lighting scenarios. With that said though, I’m still not sure how many photographers will waste their time using this much with natural light, unless you’re doing weddings. The autofocus is the most versatile for any medium format camera I’ve ever used. With that said, due to the sensor being smaller than 645, I can’t really complain and say focusing and recomposing would be tough to start with. But if you work with 6×9 format or 6×7 format, then you’ll totally understand it. The autofocus is pretty darned great, but is starts to suffer in the low light of both an apartment and outdoors. More on that in a bit.

When I initially held the camera, what I really wanted was something like the Fujifilm GW690 III’s rangefinder style of camera body. After spending days with this camera though, I’ll still hold myself to that belief but at the same time I’ll be the first to admit I’m surely eating my words. I like the ergonomics here. And what a lot of photographers will really like is the new C option on the lenses that lets a photographer use the front and back dials to change the exposure like a traditional medium format DSLR vs using Fujifilm’s dedicated number dials. Personally speaking, I’m a fan of the number dials and locking them because when it comes to studio work, you’re not changing your exposure a whole lot at all. You’re more or less setting it, locking it, and shooting. Otherwise, there’s not much to complain about here. Fujifilm has been on top of their game for a really long time. It’s surely not a sports shooter’s lens, but I see it being useful for portrait, landscape, architecture, studio, documentary, and even photojournalism to a certain point. When you consider this, Fujifilm is surely taking on Canon, Nikon, Hasselblad, and Pentax in a huge way. For that they should surely be credited–just think, a company that more or less came back out of nowhere after the announcement of the Fujifilm X100 has come this far and continues to push ahead.

What I’m Disliking About the Camera

The absolute first issue that I need to get off my chest: 1/125 sync speed when shooting strobes/flashes. Really? Really?! My Bronica ETRS did 1/500th. My Mamiya RB67 Pro S is faster (but that’s a leaf shutter). Heck, even Sony and Olympus mirrorless cameras are faster.

Really guys? Come on? I appreciate that now the camera can go down to ISO 100 but still when it comes to medium format shooting 1/125th is unacceptable.

Okay, are you ready? I’m probably going to incur some hatred here from Fujifilm’s fanboys but please do know I’m just like you in many ways except that, you know, ya’ll come here so that I can be objective and stuff–though personally I’ll admit I own a Fujifilm camera and two lenses.

Anyway, the first thing I really dislike about this camera is the dismal battery life. Remember years ago when all the Fujifilm X Pro 1 users were having issues with the battery? You’ll have the same thing here. It’s weak, but I’m certain Fujifilm will probably fix something with a firmware update, or a lot of them. The next thing I’m disliking at least for the moment has to do with working in combination of the two lenses I’m currently testing. These lenses are WAY TOO SHARP for portraiture. I’ve started to see it in the A7r II and the Canon 5Ds, but it’s very prevalent here. To ensure that it wasn’t just me, I sent a screenshot to Anthony, who totally agreed. What this means is that you’re going to have to find a way to soften a lot of skin in post production. Or, you can get a UV filter and put some vaseline on it then shoot. But then in that case, why purchase such an expensive camera? I’d be ecstatic to use some old school Mamiya glass, Hasselblad glass, Contax glass, or even Bronica glass. But then I start losing the weather sealing ability.

Speaking of glass, I’m sort of confused here. Fujifilm’s fastest medium format lens so far is an f2.8 lens offering. But what I don’t understand is that if 645 lenses can go to f1.8, why can’t we have f1.4, f1.8 and f2 lenses? At it is, this camera’s field of view and the looks it can deliver isn’t unlike anything that Sony, Canon, Nikon, and Pentax can’t already deliver, because 35mm full frame format lenses have become so much better over the years. But if you had faster lenses with even less distortion, then you’d make a better argument for sure. To that end, Fujifilm is going to need to find a way to blow all these guys out of the water and considering that they used to make the glass for Hassy lenses and they’ve been making lenses for years, I think they can do it. Something else I don’t like has to do with some of the image quality. At ISO 400, I’m seeing noise and grain in the blues even when I have Fujifilm’s pretty ugly grain effect turned off. To verify this, I was chatting with Rishi Sanyal over at DPReview and they’re finding the same problems. At such a low ISO, I’d at least expect the noise/grain to look organic like some of their films.

Now that’s another issue: Fujifilm’s Film Emulsion simulation I thought would be more on point here because you’re paying for a more expensive camera. But unfortunately, I don’t find that to be the case and I believe part of this could be due at least in some part to the lack of the X Trans Sensor. At the same time though, Fujifilm’s Pro 400H emulsion still looks different from Fujifilm’s Pro Negative Standard contrast and High Contrast film simulations in the Fujifilm GFX 50s. The colors at least come pretty close, but not the tones or the highlight/shadow rendering.

This particular complaint ties back into my initial thoughts on shooting film vs digital.

I’m still working on my review, and I’ll be offering up more reports and the full review soon.

For even more images, I strongly recommend going to my first impressions.