It’s a debate that has been going on for ages: which is the best lens focal length for street photography? While one can easily say, “To each their own,” there are significant pros and cons to each focal length that should be considered. Also, one must keep in mind that the most important thing is still the photographer who takes the photos. But with that said, without the right tools, you may not be able to get the job done. You wouldn’t use a screwdriver to flip a pancake, now would you?

Disclaimer: this posting is based on my experience with the various focal lengths and with different gear brands. The Olympus 12mm f2 is a special lens that when mounted onto a Micro Four Thirds camera, displays the equivalent focal length of 24mm. The lens is small, well built, and no where as large as the 24mm lenses in the DSLR world.

The 12mm f2 is a small lens that feels great in your hand when using it. Though when coupled with the EP3 or EPM1’s Fast AF system, you don’t really need to touch it or hold it when shooting. To get it to manually focus, all you’ll need to do is pull the focusing ring back and you’ll also have a usable depth of field scale. Additionally, the lens is superbly sharp when being shot at wide open apertures.

As is characteristic with all wide angles though, it can be tough to get any bokeh at all. Canon and Nikon’s 24mm f1.4 lenses do a good job of this though due in part to the larger aperture and larger sensors. However, the 24mm focal length allows you to capture wider scenes when shooting further back and when up close and personal, makes you feel as if you’re face to face with a person.

If that’s the look that you’re going for then 24mm might be for you. Keep in mind that if you’re shooting on a cropped sensor, 24mm lenses may actually look like a 35mm instead. Because of this, I personally feel that it’s more of a specialty lens: using it only when you need wide scenes or when you’re confined to only extremely close quarters.

Pros: wide angle of coverage. Shoot wide or get up close and personal to capture something that makes us feel as if we’re there to a certain point.

Cons: Too wide at times.

The 35mm focal length has long been a favorite of many photographers for years. Though some may argue that the 50mm focal length is closest to mimicking what the human eye sees, I actually believe it to be the 35mm.

I’ve used the 35mm lens in three different flavors: Canon’s 35mm f1.4 L, Leica’s 35mm f2.5 Summarit and Olympus’s 17mm f2.8 (which actually comes out to around 34mm). In many ways, the 35mm focal length is also a favorite of mine. It is wide enough for most situations when I want to capture an entire scene but it also delivers a feeling that you’re right there when shooting close ups (more so than the 24mm). Because of this, I’ve felt the need to change lenses less and less when the 35mm is attached to my camera. Due to the slightly longer focal length than 24mm, it can actually be very easy to get bokeh in your photo if you want it. I typically tend to shoot wide open and stop down nowhere beyond f4. Even at this aperture setting, I can still get quite a bit of that creamy and delicious bokeh. Though sometimes, I feel as if 35mm can still be a bit too wide. What helps in the end is cropping in the editing stage.

On a cropped sensor camera, you’re going to get the equivalent focal length of around 50mm.

In conclusion, the 35mm is my favorite focal length because I feel that it mimics what the human eye sees, I get bokeh when focused fairly far away (in the photo above around 7 feet) and it still provides a sense of intimacy in the photos.

Pros: Extremely versatile focal length. One can get up close and feel exactly as if they’re there or back up a bit and feel like they’ve captured an entire scene. At this focal length, you can also still get quite a bit of bokeh when up close and further away.

Cons: This is essentially a step up lens from the 50mm focal length. When you want go get closer to your subjects, upgrade to this. The entire staff of The Phoblographer has one time or another written an ode to the 50mm lens. I loved my Canon 50mm f1.8 before upgrading to the 50mm f1.4 and the SLR Magic 26mm f1.4 is often attached to my Olympus EPM1 or EP2. Additionally, I’ve used the Leica 50mm f1.4 Summilux on an M7. No matter what the experience was, using a 50mm lens has always been a delightful and rewarding time. Many photogs recommend that you shoot for a year with nothing else but a 50mm.

50mm lenses are the ones used by many street photographers and it is arguably the most used focal length. It’s for good reason too: 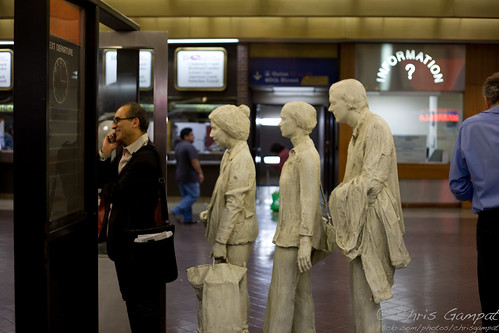 50mm lenses allow more timid photographers a workable distance from their subjects without being caught but still manage to provide a sense of intimacy and a feeling that the viewer is right there in the photos. Because of their natural design, 50mm lenses can also mimic the look of telephoto lenses or wide angles just by moving a couple of feet back or forth.

They are also usually the cheapest of the bunch mentioned in this list because of how easy they are to design. Additionally, 50mm lenses aren’t often giant lenses. They can be kept relatively small and therefore aren’t intrusive in their looks.

On cropped sensor cameras, they can be around 75mm or 80mm equivalent focal lengths. This is better for portraits; so getting a 30mm or 35mm instead can give you the 50mm equivalent field of view.

Pros: It’s the one lens that you can keep on your camera forever. It can mimic the look of a wide angle or telephoto lens very easily.

Cons: The only real con is how addictive this lens can be. Eventually all your photos can end up looking the same unless caution is taken to always work with creative angles. That can be hard to remember when you’re caught up in the moment of shooting though. 85mm lenses haven’t often been used by many street photographers and it’s actually recommended against. However, there has been lots of work popping up around the net being shot with telephoto lenses; and many of them are quite good. The 85mm lens is the classic portrait lens. I’ve used many in the form of the Canon 85mm f1.8, Sigma 85mm f1.4, and Rokinon 85mm f1.4. Each time I’ve used one, I’ve found myself having to move far back away from my subjects in order to capture their full bodies or an entire scene. Sometimes, in NYC, you don’t have that much room to move around; but this pushes you to work on getting more creative angles instead.

The excellent characteristic about 85mm lenses is that your photos will suffer from almost no distortion of your subjects. In theory, that could mean less editing later on, but you do indeed need to work harder to get the better shot in camera.

A problem with the 85mm lens is that it can promote being too much of a fly on the wall instead of interacting with your subjects or getting close up to make your viewers feel like they’re right there in the scene.

Though they can be used to get some very good street photos, I often recommend not going with an 85mm: especially because it can be around 125-136mm on a cropped sensor camera.

Pros: Excellent for street portrait and the more timid photographer.

Cons: It will keep you further away from your subjects unless you ask for their portrait. Shooting wide requires you to back up quite a bit.

So which one is the best? I’m going to come straight out and say that we should remember that it’s always the photographer that makes the images and that the camera and lens are just tools. With that said though, you’ll need the right tool for the job.

I’m inclined to say that this can be an easy tie between the 35mm and 50mm equivalent lenses. They provide enough intimacy and versatility to the users. Though the 24mm and 85mm focal lengths can still do very good jobs, those are more specialty lenses in my eye.

When applying street photography skills to other situations such a weddings or events, I’ve often still found myself reaching for the 35 and 50mm lenses for the same reasons as stated above.

In the end, it’s all a matter of personal tastes, but these lenses are still often your best bet.

Before you buy, you can rent these lenses at Borrow Lenses.