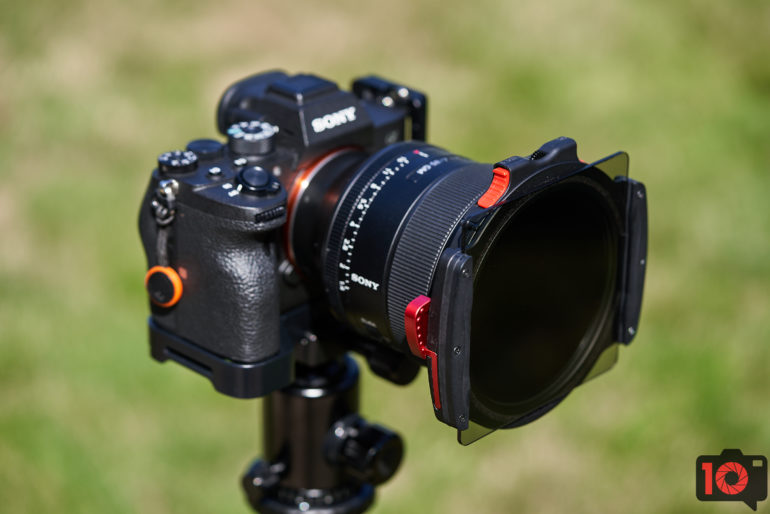 Tired of screwing variable NDs on and off of your lenses all the time? The Haida M10 Insert Variable ND Filter aims to make that a thing of the past.

When it comes to neutral density filters, variable NDs are favored by many photographers for their versatility. Instead of carrying a bunch of individual ND filters of different strengths, VNDs cover a set ND range that can be adjusted on the fly. However, the way traditional variable NDs are designed (where two rotating rings are essentially conjoined) can sometimes make them a pain to remove. A filter wrench is often required. Haida is looking to change the way photographers use variable NDs. By leveraging their M10 Filter Holder System, photographers no longer have to screw and unscrew filters, VNDs included. The Haida M10 Insert Variable ND Filter works in concert with the company’s own M10 Drop-In Neutral Density and Circular Polarizing Filters. When combined, the M10 Insert VND acts as a multiplier for the M10 Drop-In ND/CPLs’ ND rating. Depending on the amount of light reduction needed, simply swap out the corresponding Drop-In ND/CPL rather than unscrewing a VND and screwing on a stronger one in its place. Sounds great in theory, but how well does the Haida M10 Insert Variable ND Filter work in the real world?

Like other 100 × 100 mm filters from Haida, the M10 Insert Variable ND Filter comes with a branded metal clamshell storage case. The plastic case seen in the above image is holding one of the M10 Drop-In Neutral Density and Circular Polarizer Filters (3-Stop in this particular case).

Opening up the clamshell case reveals the Haida M10 Insert Variable ND Filter within. From a cursory glance, it looks like any run of the mill 100 × 100 mm ND filter. The pre-production sample we tested did not feature any markings, but retail units will feature markings to help tell the filter apart from others you may have. Next to it is the 3-Stop M10 Drop-In Neutral Density and Circular Polarizer Filter once again, with its plastic carrying case also open.

Throughout our time with the Haida M10 Insert Variable ND Filter, it withstood the abuses that come with being used and transported from various locations ranging from urban to rural. The metal clamshell carrying case did an excellent job of keeping the M10 Insert VND from sustaining any damage while being transported. We left the filter the filter attached to our camera as we were traversing through the wilderness, walking along/under cliffs and waterfalls at times. As a result, the filter was subjected to water (both rain and from the waterfall) and being struck by falling tree debris or small pebbles. To our surprise, we didn’t find any scratches or damage of any kind as a result of the abuses mentioned above. The filter was also easy to wipe clean thanks to the coatings on both surfaces. Well built as it may be, the Haida M10 Insert Variable ND Filter is still made from glass. You’ll want to handle it with care and attention when using and transporting it at the end of the day.

Usability is one area that’s a bit of a mixed bag for the Haida M10 Insert Variable ND Filter. Attaching the filter itself works identically as you would with any other 100 × 100 mm photographic filter that’s ever come to market since said filters were first introduced. That’s the easy part. The usability hiccups actually stem from the Haida M10 Drop-In Neutral Density and Circular Polarizer Filters.

To adjust the amount of light you want to cut out, simply rotate the dial on top of one of the Drop-In ND/CPL filters until your image is exposed to your liking. The M10 Insert VND essentially amplifies the variable light reduction range of the Drop-In ND/CPL Filter that it’s paired with. While adjustments can be made quickly and easily, this is also a source of frustration. There are no neutral density stop markings or mechanical clicks on the Drop-In ND/CPLs. As such, there is no way to accurately gauge how much you’re actually stopping down by. You can turn to your camera’s meter to give you an approximation, but it’s an estimation at best and far from reliable particularly under rapidly changing lighting conditions (such as when cloud coverage is changing erratically or during golden hour). To be fair, this is not an uncommon issue with a lot of variable ND filters currently available on the market, but an annoyance nonetheless.

One thing that using the Insert VND + M10 Filter Holder + Drop-In ND/CPLs combo does very well is that it significantly reduces the risk of moving your camera when adjusting your ND stops or swapping filters. As long as you’ve got your camera and the Haida M10 filter system mounted onto a sturdy tripod, the amount of movement introduced is practically negligible. This is handy for photographers that prefer to bracket their exposures to create HDR images in post. Using the Haida M10 Insert Variable ND and the 3-Stop Drop-In ND/CPL filters together, I was able to capture three different exposures of the same scene as seen in the samples below (none of these images have been edited):

Using Aurora HDR, we created the below HDR image using the three source images above. No additional editing was done besides merging the three exposures.

Since the camera didn’t move at all between the three source exposures, they lined up perfectly and eliminated potential ghosting or misalignment artifacts from appearing in the final image. This is also super useful for photographers that prefer to manually mask and create their own high dynamic range images rather than using third-party software to do so.

It’s not uncommon for variable neutral density filters to cause unwanted color casts in your images. In fact, Haida actually lists “low color cast” as one of the features in the press materials for the M10 Insert Variable ND Filter. This proved to be accurate from our test results. Images shot using the M10 Insert Variable ND filter appeared marginally warmer and took on a slight green tint. Thankfully, we didn’t detect any reduction in sharpness. While the color cast can be corrected during post-production, it’s still an extra step that can add up if you’re processing a ton of images. Here are two images of the same scene that showcases the color cast. The first was captured sans filter, while the second is a long exposure shot using the Haida M10 Insert Variable ND Filter and the 3-Stop M10 Drop-In ND/CPL:

Here are some additional images created using the Haida M10 Insert Variable ND Filter. These images were processed using Capture One 20 Pro, ranging from color grading, cropping, levels adjustment, and/or perspective correction. As a matter of ethics, however, none of the sample images seen within this review have been retouched so that you can judge the quality of the images produced using this filter for yourself.