Polaroid remains a medium of choice for many photographers because of the unique quality it brings to their projects — including nude photography.

A quick browse at #Polaroid on Instagram will show a mix of mostly random shots, but among the most eye-catching are the portraits with either a fashion slant or a more experimental look. Dig into the hashtags and accounts and you’ll begin to narrow down the posts to actual Polaroid photos, with even more interesting portraits popping up. Dig enough and you’ll eventually notice that Polaroid has become a popular medium not only for fashion photography and documenting youth culture but also for photographers exploring artful nude photography. Screenshot image from the Bettie Page Reveals All Trailer

“Working with a Polaroid camera as he did, everything stayed in his studio until he was ready to show it–and until, in the mid-1970s, the world (or at least part of it) was willing to see this work as art rather than smut.”

The Flashbak article raised an intriguing possibility that it was “some form of sexual fetish–replacing the act of sex with a camera.” However, it’s also interesting to see that his photos show a distinct aesthetic that is a lot like the artsy Polaroids we see of late, suggesting that it could be a deliberate practice of an aspiring fine art nude photographer. 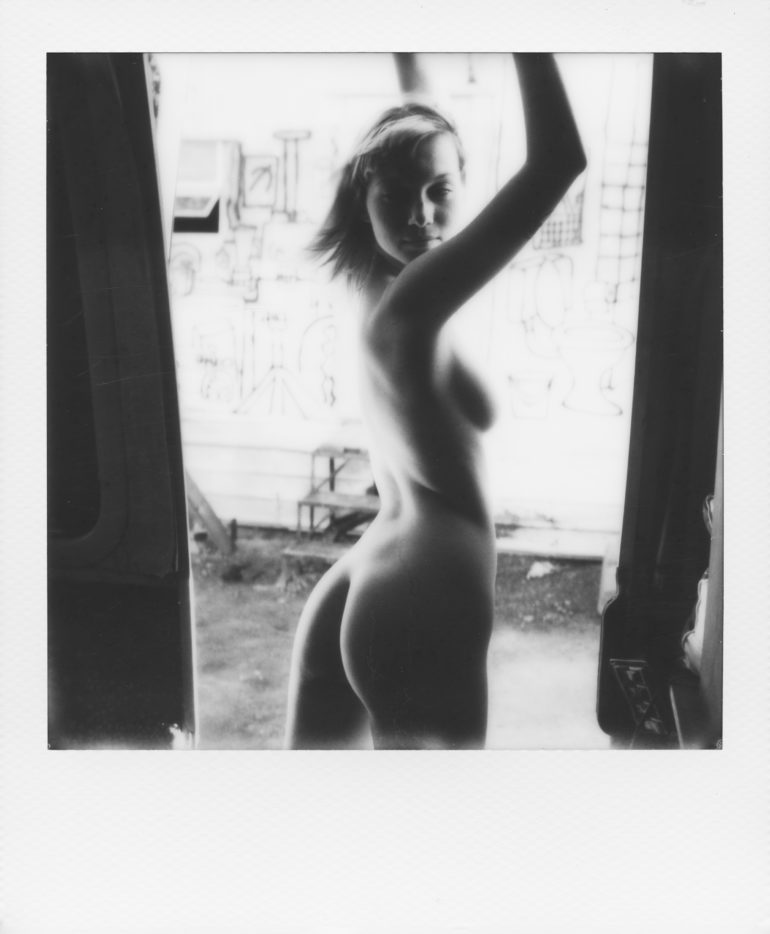 Today, Polaroid nudes seem to come in two distinct styles: the pornographic and risqué, and the more emotive and artistic. There are also photographers who dedicate their craft (or a good portion of it) to creating tasteful Polaroids of the latter. Among them is Brussels-based freelance photographer Kirsten Thys van den Audenaerde, who began shooting nudes with a DSLR but discovered Polaroid three years ago by accident through The Impossible Project and their I-1 Instant Camera. “I remember unpacking it, inserting the first pack of film, and being hooked from the moment the first (blurry) picture came out. From then on I started reading up on the history of Polaroid and buying vintage cameras on auction sites,” she recalled.

She organized a nude shoot soon after to see how it would look on Polaroids and fell in love with the results. Feeling fed up with her own photography and the “obsession with perfection,” it became the perfect outlet for going against the industry’s expectations. “Polaroid gave me back that feeling of authenticity. I love how it captures a moment exactly how it was. I particularly like the way it captures delicate skin tones. They often have a dreamlike look.” These insights give us an alternate view on the appeal of nude Polaroids today; it’s less about the eroticism, and more about the authenticity of the medium for the photographer and how they heighten the mood of nude photography. For female photographers like Kirsten, there’s also the element of the female gaze on nudity, which presents a different take on the female body compared to the traditional male view.

“I think they like the softness and authenticity Polaroid offers and the fact that I don’t retouch my images,” she said on her audience, who seems to appreciate the fact that she shoots nudes using Polaroids. “I have shot some more explicit stuff and it remains much less hard on the eye compared to shooting that type of work with a digital camera.  I also think they have an air of intimacy about them that people love.” Don’t fence me in by Kirsten Thys van den Audenaerde

Challenges of the Instant Route for Nudes

Nude photography has been a widely practiced art in the digital world, and there is often very little technical challenge that prevents digital photographers from getting great photos. With Polaroids, however, there has always been a risk of shooting with older emulsions that produce erratic results. While the films are now more stable since the Polaroid Originals rebrand, it’s still very easy to get an overexposed or underexposed image, as Kirsten noted. Polaroid shooters eventually learn to adapt to the technical hiccups, but since it’s the age of Instagram, that’s not the only challenge they have to contend with.

Since we see a lot of these Polaroid nudes on social media, it may be easy to think that these platforms play a big part in luring today’s photographers to go instant when shooting nudes. After all, selling or swapping the prints aren’t the usual routes for Polaroid nudes anymore; they’re for everyone’s online “consumption” now, especially on Instagram. However, for Kirsten, social media played no role in her decision to do nudes on Polaroid. With photographers today having to rely on Instagram and Facebook to get traction for their work, of course she feels compelled to share her Polaroids on these platforms. Still, the policies regarding nudity haven’t been very discerning about what can be considered fine art as opposed to pornography. This, she said, is a big frustration for photographers like her; if she had known how these platforms would change their policy towards nudes, she would have chosen a different subject.

“It makes me sad that the two biggest social media platforms seem unable and unwilling to appreciate nude photography as an art form, forcing me to censor every single image, and even then run the risk of being banned. As much as I understand that some people or cultures are sensitive to this type of content, I also feel that Facebook is powerful enough to play an educational role. It would be extremely easy to design a NSFW button so people could choose whether to see content or not. Instead nudity is vilified and some artists are shadow banned so their work remains invisible.” The Future of Polaroid Nude Photography

As Polaroid and even Instax remain hot commodities, and developments continue to improve the technology, Kirsten sees instant photography as a whole being on the rise. Younger people are picking it up and utilizing it in different ways. However, in terms of nude photography specifically, she thinks it could become increasingly difficult for photographers like her to show their work.

“If we can’t show our work on the two largest social networks anymore, where will we go?” she laments. “Nudity is getting vilified again, nipples are deadly weapons of mass destruction, pubic hair a public enemy. I wonder sometimes whether nude art will have to go more underground to find a place where we can create and display it freely.” If that happens, shooting nude Polaroids could come full circle, with photographers organizing camera club sessions and exchanging or selling prints, and maybe even low-key exhibits. Or, we could even see the next generation of Carlo Mollinos amassing thousands of prints that may never see the light of day. One thing is for sure: Polaroid photography, with its inherent privacy, instant results, and trendiness, will always remain an option for nude photography.

Special thanks to Kirsten Thys van den Audenaerde for sharing her insights and Polaroid photos for this feature. Visit her website and follow her on Instagram to stay updated with her work. Her originals are also for sale on Artsy and 1stdibs.