Four of Our Favorite Affordable Cameras with In-Body Image Stabilization In-body image stabilization has revolutionized the way we use cameras.

Just a few years ago, in-body image stabilization was not a very common feature, but now it can be found in many cameras. Sony pushed the technology to the front line when they started selling affordable cameras with their 5 axis IBIS, and now others are following suit.

The great thing about increased competition in the photography world is that technology once out of reach to many becomes mainstream and more accessible. There are many cameras on the market now that have in-body image stabilization, and not only are they great performers, they’re incredibly affordable too.

The benefits of IBIS are immense. This technology allows photographers to hand hold non-image stabilized lenses and use them with slow shutter speeds and still get sharp images. Low light photography becomes even easier too, and the weight of the gear you’re holding will become lighter as lenses without image stabilization and large apertures weigh significantly less. To many, IBIS is a game changer, especially to those who may not have the steadiest of hands.

The technology available to us now has changed the photography game. It has allowed us to approach challenging situations and problems much differently. Fortunately in-body image stabilization is becoming the norm, even in cameras that cost under $2,000. Here’s a look at some of our favorite affordable cameras with this exciting technology baked right in. “…some of the best things about this camera are the in-body image stabilization and the fact that when you first boot it up, it tries to pair with your smart device in an attempt to figure out the time zone, time, etc. It also has bluetooth connection and the ability to send images to your phone via bluetooth, but I could only get it to work via WiFi. Back to the image stabilization; I was able to shoot at almost 1/5s with it activated.”

The X-H1 is capable of producing really nice images thanks to the 24.3 Megapixel X-Trans sensor. This sensor is tried and tested, and is the same one that can be found in the lauded X-T2. Images are sharp and clean all the way from the cameras lowest ISO setting up to ISO 6400. Color rendition is gorgeous thanks to the built in Fujifilm film simulations. The three inch tilting touch screen is useful, and the electronic view finder makes this (like many other Mirrorless cameras) fun and easy to use. Pair this camera up with the super sharp Fujifilm 35mm f2 and you’ll create images that will make your jaw drop.

The autofocus system is amazing on the X-H1. You’ll find 325 focus points, six continuous focusing modes, and you can rattle off 11 frames per second. Nailing your shots, even in low light situations, becomes easy, especially with the 5.5 stops the in-body image stabilization adds. During our testing we were able to get usable images when hand holding and shooting as low as 1/5 sec. Build quality is fantastic, while the ergonomics might take a little getting used to, you can be safe in the knowledge that the X-H1 has been built to withstand some abuse, and it features some really good weather sealing too.

When you look at the above specs and then throw in Wi-Fi, Bluetooth, dual card slots, easy to use controls, a top panel LCD, and the ability to shoot 4k video in f-log you realize what a beast of a camera you have here. The Fujifilm X-H1 is easily one of the most versatile cameras with IBIS on the market right now, and the best part is that it’s really affordable too. Pro Tip: Make sure you’re comfortable when you go out to shoot by using a padded camera sling instead of the neck strap that comes with your camera. Camera slings redistribute the weight of your gear across your entire upper body which means you can shoot for longer periods of time without becoming uncomfortable. 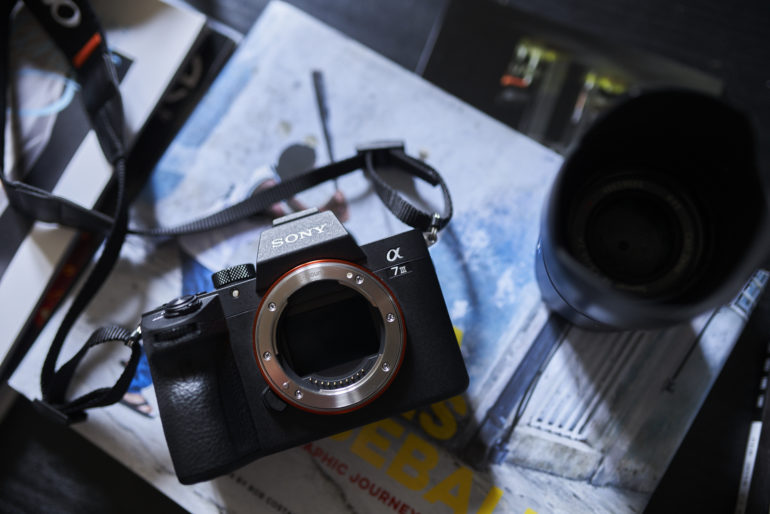 While other manufacturers implemented in-body image stabilization a while ago, it was Sony who made this technology popular and affordable. The tech giants have mastered IBIS, and now consider it a basic requirement. To Sony, the A7 III is considered a basic Full Frame camera, but to many in the world of photography it has become a workhorse packed with features that just a few years ago were out of reach to the masses, and that includes in-body image stabilization.

“What I’d also love to comment on is how simple it is to get near blur-free images at slower shutter speeds.”

Inside the A7 III you’ll find a 24.2 Megapixel, backside illuminated, Full Frame Sensor that has been paired up with the BIONZ X Image processor. The camera features 693 autofocus points, a 10 frames per second burst mode, ISO which is expandable up to 204,800, dual SD card slots, weather sealing, a three inch tilting touch screen, an OLED electronic viewfinder, Wi-Fi and NFC capabilities, and of course Sony’s SteadyShot five axis in-body image stabilization which is rated at giving an extra five stops of light. As we mentioned in our review, we found it to be incredibly easy to get near tack-sharp shots at ridiculously low shutter speeds.

Pair the Sony A7 III up with the Sony 24-70mm f2.8 and you’ll have a camera and lens combo that will deliver amazing results no matter what you shoot. The A7 III is really a jack-of-all-trades camera. Portraits look great due to the shallow depth of field you can achieve with the Full Frame sensor, landscape images will look fantastic because of the camera’s dynamic range, and event photography, documentary photography, and even street photography are made that much easier because of this cameras low light abilities and in-body image stabilization.

Battery life has been greatly improved in the A7 III too, with a single battery being capable of holding enough charge for 700 shots. Add in 4k video at 30 frames per second, and great overall build quality, and you’ll have (in Sony’s terms) a basic camera that is really anything but basic. Sony really hit a home run with this camera. Pro Tip: If you have a camera with dual card slots, take advantage of that feature and make sure you have enough spare cards to keep those slots full. SD Cards are cheap right now so it’s a good time to stock up. The Sony a6500 is another camera that features the powerful SteadyShot five axis in-body image stabilization technology that has changed the way we do things. This pocket sized rangefinder camera has a ton of tech crammed into its small body, and for the price, this APS-C based camera is really hard to beat.

“Sony states that this camera has moisture and dust resistance. Of any of the mirrorless cameras on the market, the a6000 series has always felt the most hearty. Indeed, this proved to be true when I took the camera out into the snow for shooting time. It shrugged off the snow with ease.”

The a6500 has one of the fastest autofocusing systems around, five axis in-body stabilization, and a 24.3 Megapixel APS-C sensor which makes this little monster great for sports, action, and wildlife photography. The a6500 features 425 autofocus points, a tilting touchscreen for ease of use, plenty of customizable buttons and controls that can be set to your liking, and decent battery life (about 350 shots per charge).

You’ll also find Wi-Fi capabilities, a single SD card slot, eye and face autofocus, and a bright electronic viewfinder. The IBIS in this camera is good for an extra five stops of light like the A7 III, which means that nailing the shot in low light situations is an easy thing to do, not to mention it makes using lenses that are heavy and don’t particularly balance well on the small body easier to handle.

Picture quality is great, which is what we have come to expect from Sony cameras. Images produced are sharp, colors rendered are nice, and good dynamic range and high ISO performance make this a great camera. Build quality is very good too. The magnesium alloy body feels nice in the hands, and while it is on the small side, it’s still quite comfortable to use for long periods of time. You will also find good weather sealing as well, so you can go out and not worry too much about the weather.

Pair the a6500 up with the Sony 70-200mm f4, and you’ll have a camera capable of capturing the game winning play, even in less than desirable lighting. If you are looking for a small, affordable camera that doesn’t skimp on features, the a6500 is a solid choice. Pro Tip: Being able to back up your images easily to an external device while you’re on location sounds like the thing of dreams, but with the Western Digital Wireless SSD you can do just that. You don’t need a computer; simply put your SD card into the external SSD and your images will be backed up in just a few minutes. You can’t put a price on peace of mind.

The Pentax K-1 is a camera built to be used out in the elements, and in many ways this camera is a landscape photographer’s dream. It’s a rugged Full Frame camera that has enough weather sealing to survive the harshest of storms, and five axis in-body image stabilization. These things combined make the K-1 one of the best landscape and environmental portrait cameras available. It’s also under $1,500!

“The Pentax K-1 has fantastic weather sealing, a great interface that mostly keeps your eye in the viewfinder and not on the LCD screen (though I wish the viewfinder were easier to see for those of us with extreme astigmatism), and a very nice build quality overall.”

The K-1 is a camera that is often overlooked which is a shame because its technology-rich body really makes it great for serious landscape photographers. The AstroTracing technology means you don’t have to use external star trackers for astrophotography, the Pixel Shift feature can produce huge, detail-filled files and really stops the need to stack multiple images together in post which is very time consuming, and the copious amounts weather sealing means you can use this camera in inclement weather and not worry about anything.

While many will be thinking that landscape photographers always use tripods (which would make IBIS a moot point), they may not realize that there are times when you’re outside and grabbing, and setting up a tripod just isn’t feasible. At times you can come across a scene that needs to be reacted to quickly, or you can see perfect lighting that can be gone in an instant, and it’s in those situations where in-body image stabilization really comes into play with the K-1. Grab the camera, frame the shot, and fire away knowing that you will get a sharp image.

The K-1 can, of course be, used for all genres. In fact it really excels in studio environments, and thanks to it’s high ISO performance and IBIS, it’s great when it comes to environmental portraits where low lighting may occur.

Put the Pentax 15-30mm f2.8 on the K1 and you will have a combination that is perfect for astro photography, general landscape photography, and environmental portraiture. If you want a rugged, Full Frame DSLR that is capable of producing outstanding images, which boasts in-body image stabilization, the Pentax K-1 needs to be looked at.