The Fujifilm Instax SQUARE SQ10 is quite an interesting, if not at times frustrating, camera that packs a whole lot of fun into an oddly shaped body that you’ll either not totally understand or fall head over heels for. The camera is Fujifilm’s latest addition to their Instax lineup of films and cameras serving as an in-between point for Instax Mini and Instax Wide. The Instax lineup of cameras have always been incredibly strong sellers amongst young women (many of my great, personal friends use Instax cameras and film). Part of the great selling point is the small size of the prints which are easy to carry and fun to share. But another part is the “cutesy” form factor. They sell so well in fact, that if you were to consider the sales of Fujifilm Instax vs the the rest of the digital and analog camera industry, Instax film far outsells anything in digital.

While the Fujifilm Instax SQUARE SQ10 isn’t exactly what I personally want, it’s going to be a hit with a lot of folks. We tested the Fujifilm Instax SQUARE SQ10 with Instax Square Film and a Micro SD card. The really interesting thing about the Fujifilm Instax SQUARE SQ10 is its already very square but rounded body. It’s designed with this in mind obviously, but to be honest, I think if Fujifilm made it in a white and brown leatherette color to sort of look a bit more like the Instagram logo, it would make more sense.

But let’s start this ergonomics tour. The Fujifilm Instax SQUARE SQ10 has a lens on the front. You turn this to activate the camera. On both sides of the lens there are buttons. One side lets you shoot and the other lets you change the shooting mode from normal, bulb or double exposure.

On top of these are the AF assist lamp and the flash. Look to the top and what you’ll find is the area where the camera spits out prints. Move to the back and you’ll spot the LCD screen and controls of the Fujifilm Instax SQUARE SQ10. The controls are a six way button system which is simple enough. Inside that is a directional wheel. And inside that is the confirmation and menu button.

Personally, making a big wheel and having a user be able to press each of those areas accordingly may have made more sense. Just think about the way Canon does it with some of their more consumer grade cameras. 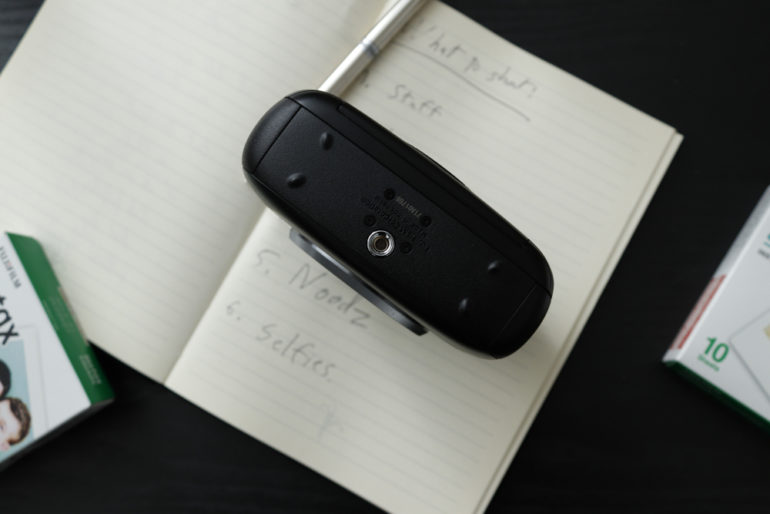 On the bottom you’ll find the tripod socket. Nothing else to see here. On one side of the Fujifilm Instax SQUARE SQ10 you’ll spot a door which hides ports that let you charge the camera up or insert the Mini SD card. Now I want you to look at this photo. The Fujifilm Instax SQUARE SQ10 has an M setting on the side, but it can also be set to manual. Manual just means that you can manually print your photos vs the camera automatically printing all of them. The Fujifilm Instax SQUARE SQ10 has a very plasticky body and a very rounded and square one. Sometimes it’s weird to hold. Imagine trying to hold onto a piece of wood that is square-ish in design but rounded on the edges. Then you wrap your hands around said piece of wood and use your fingers to shoot with it. It would make the most sense to bring the camera close into your body and face then shoot. But in reality, what you end up doing is holding it further away from you.

It’s sort of annoying; but that could also be because I’ve got larger hands than the target market for this camera. A few things like better thumb rests, moving the shutter button, etc would have made a bit more sense in my mind. The Fujifilm Instax SQUARE SQ10 has menus that go directly into certain parameter changes. Some of these changes can be set immediately by pressing a button on the back then scrolling through your setting. But it’s also sort of weird to work with if you want to change multiple settings.

For example, what if I want to choose the Monochrome setting, then tweak the vignette then adjust the composure compensation. What that ends up being is the following process:

Weird, right? Well, for simplicity, it makes sense. But what would have been much quick is if Fujifilm put all those parameters in a single menu. So instead your workflow would be

Of course, I may not be the typical consumer who buys these, but I’ve actively bought Instax film and cameras before plus I shoot with the format a lot. Here’s the image mode selection menu. When you scroll through you get a number of Instagram light effects that tend to really blow the highlights out. Once you’ve selected a mode, all you need to do is shoot. If you’re in auto print mode, the image will print automatically. But if you’re in normal mode then you need to select the photo and then choose to print it using the green button. Then you’ll confirm the printing process. After a number of seconds, the print will come out. It is very important you tell someone you’re printing an image for to not pull it but instead to just let it come out normally. The chemicals to develop your print need to go through the image and the rollers will surely do their job thoroughly. What’s cool about the autofocus with the Fujifilm Instax SQUARE SQ10 is that the camera focuses fairly fast. In low light it will take a longer time. You can’t manually select a focusing point though. If you’ve looked at the previous photos you’ll notice something very wrong: the metering. My biggest issue with the Fujifilm Instax SQUARE SQ10 is probably this. The camera tends to really blow out highlights and overexpose–which makes no sense because this is an ISO 800 film and you’ve got a really fast f2.4 lens. So sometimes it’s a great idea to go in and dial down the exposure compensation.

It’s really, really weird and I genuinely don’t like the way it meters images when you’re indoors.

Now here’s where I’m very torn. Why? The print quality to me is honestly not as good as what you’ll be able to get with a lens directly exposing the film. That, to me brings out a lot of the quality and charm of Instax. The Fujifilm Instax SQUARE SQ10 takes a digital photo and exposes it onto the film. Plus it’s a small sensor when Instax is a larger format. Instax Mini was like the 645 medium format and Instax Square is actually very slightly larger than the Square photos that my Pentacon Six TL spits out.

So with that said, just imagine how much more potential Instax Square has. Instead, it’s being wasted with a very small sensor that will probably be a hit with a lot of folks if they can just fix the metering via a firmware update.

Of course, the digital images will probably never see the light of day except onto Instagram or social media. But with that said, I feel like the Fujifilm Instax SQUARE SQ10 is sort of taking away the idea of what Instax was always marketed to be: an original and one of a kind. With Instax film, you get one photo. That’s it. But with this, you can print that photo over and over again.

It has its ups and downs, but personally I’m very torn here and I think the image quality (which is at 1920×1920 pixels) could have been much better. At the same time, you’re making a small print, so who cares? In Comparison to Other Formats Take a look at this image above. From left to right, you’ve got: It’s crazy to see how much smaller Instax Square is than Impossible, and Impossible film can be shot with cameras that have full control. I can’t wait for that to come to Instax Square honestly.

As a product, I’m sure that the target audience for the Fujifilm Instax SQUARE SQ10 will love it to death. People who love simply shooting photos and don’t know any better about photography will be fine; and in a way that means that the more you know, the more you’re aware of and ignorance can be bliss. But there are also issues with the metering and the slow interface which I think will need to be fixed with a firmware update.

Personally speaking, I’m more excited about what’s possible with Instax Square vs this camera in and of itself.

The Fujifilm Instax SQUARE SQ10 receives three out of five stars. I’ve tried it, and at the moment I’m not super impressed. Want one? Check out Amazon for the current prices.