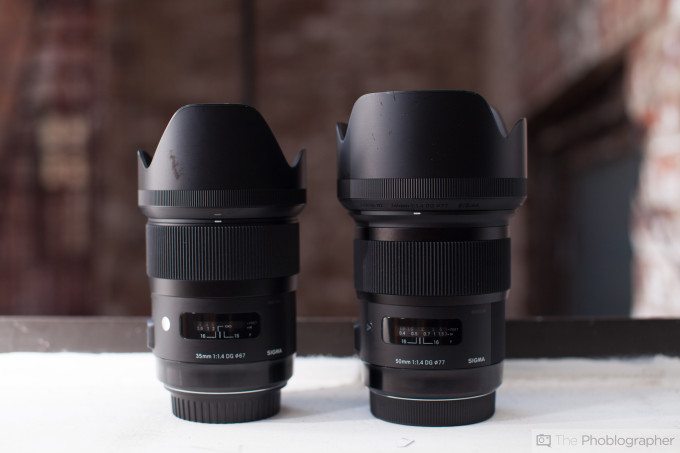 Though they’re two different focal lengths, this question was bound to be asked by someone. Sigma now has two excellent options for full frame users from their Art series of lenses: their 50mm f1.4 DG HSM and their 35mm f1.4 DG HSM. Both have been tried and true to be capable performers. But which one is best for you?

Be sure to also check out our guide to Sigma’s prime lenses. When it comes to pure looks the Sigma 50mm f1.4 Art and 35mm f1.4 Art look almost identical. The 50mm is a bit larger in both girth and height in addition to having a larger lens hood. The 35mm’s focusing ring is also a bit closer to the front. Both lenses are built very solidly and pretty much in the same exact way. Both lenses have a finish that is a mixture of matte and smooth while also giving off this aura of elegance. They truly are art lenses because of this.

Neither lens has weather sealing; so you’ll need to keep that in mind when out shooting in tough weather situations. Additionally, both lenses are fairly large with equally large focusing rings that feel just great.

Third party lenses have traditionally had a major problem when it came to autofocusing with cameras. The reason for this is because of the fact that focusing algorithms seem to change with each new camera body. Both lenses focus quickly on a Canon 5D Mk II–pretty much as fast as a Canon lens would. This statement applies to both low light and normal lighting conditions as Canon lenses will often act similar. Event, wedding, and journalistic photographers should have no reason to panic because of this. We’re also very confident that they will perform very well on the newer bodies.

Of course though, Sigma’s lenses may need microadjustment to the camera body. But to be fair, first party lenses also sometimes need this.

In the end though, you should know that neither lens is a slouch when focusing providing that you select and focusing point first. This is where we get a bit into the apples to apples game. The 35mm f1.4 Art and 50mm f1.4 Art are both very good lenses and perform admirably. And in all honesty if you’re trying to figure out which one you should go with then you should consider the fact that it’s really just about what focal length you like more than the other. Personally, I’m more of a 35mm field of view guy than 50mm.

Here are our findings. Both of these lenses showcase excellent sharpness–in fact they’re two of the very best lenses that we’ve tested in the site’s history. We found the 35mm f1.4 DG HSM Art lens to be a tad sharper though when we’re talking about straight out of the camera performance. Those of you actually making a living from your photography will highly value this and we’re confident enough to say that the results will make you ditch your Canon L or Nikon G lenses. When it comes to Sony’s very good Zeiss 50mm f1.4 though, it’s a very tough battle with Sony and Sigma basically being neck in neck.

While many sites are also comparing the quality of the 50mm f1.4 Sigma lens to the Zeiss 55mm f1.4 Otus, we’re not quite sure if that is a very fair comparison. Sigma has outright stated that they’re going after Zeiss’s Otus offering with the 50mm f1.4 Art lens, but the folks that want Zeiss glass will always go for Zeiss glass. Zeiss glass, though delivering positively spectacular quality, also is about the full experience of using them. The build quality is something that no one else can touch and the feel of a Zeiss lens makes you feel as if you’ve earned all the xBox achievements that you possibly can.

Because of its longer focal length, you can expect to get better bokeh out of the 50mm f1.4 Art lens. That isn’t to say that the 35mm f1.4 Art is a slouch. In fact, it’s one of the most used lenses by our Editor in Chief for product photography on this site and general work. Bokeh fiends could be happy with either option when shooting wide open or only stopped down a little bit. But as always, the best bokeh will come when you are focused closely on your subject ie them not being far away. The lenses have a very creamy bokeh that is surely creamy over being hazy–and once again due to the nature of the focal lengths the 50mm takes the edge. You’ll be happy with the results from either lens with beautiful round bokeh balls and an overall dreamy look that they can produce.

To be a bit more official with our findings, here are two images showing off the bokeh and sharpness right out of the camera. Both images were shot from the same location and focused on the same point. In our usage of the lenses, we found the 35mm f1.4 Art lens to have more contrast and saturated colors than the 50mm f1.4 Art. The contrast is much greater whereas the saturation is only a hair better. Contrast can affect saturation for sure though. For wedding photographers that often rely a lot on making sure that colors are absolutely perfect, you’ll be happier with what the 35mm f1.4 offers and you may need to do a bit more post work with the 50mm f1.4 Art offering.

If you’re going to be applying film and VSCO presets to your images because every Bride in the world wants them, then don’t worry a single bit about this and just focus on capturing an amazing image instead.

Both lenses seem to mostly give extra punch to the blues, reds, greens and yellows. On a Sony DSLR and because of the way that their white balancing algorithms work you can expect a bit more out of the purples.

We’re going to let you judge for yourself which lens is best for you. They’re both excellent performers and can do a great job when used in conjunction with one another. But you’re best off figuring out which focal length is better for you.