Nikon recently announced their D7100 DSLR–and they have also clearly stated that this camera is now the flagship APS-C DSLR in their lineup. It’s predecessor, the D7000 and in some ways the D300s, were met very well by photographers of all likes. They were extremely powerful cameras–especially the former as no one could keep it on their shelves for a while. But the D7100 enjoys some major upgrades such as an APS-C sized sensor with 24.1MP and weather sealing.

I’ve been playing with this camera for less an than hour as it just got in the door. But the good news is that I took it out into NYC’s snow already and have JPG samples. 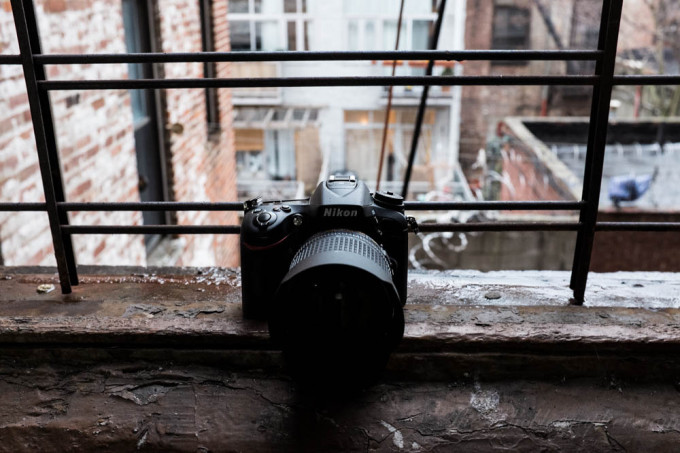 Nikon’s D7100 feels small in the hand. It doesn’t feel as beefy as the D300s but it feels more substantial than the D7000. This camera is clearly targeted at an advanced user and with that said, Nikon has also tried to create an interesting compromise. The result is a camera with nearly as many buttons on the frontal area as their higher end DSLRs.

To be quite honest with you, I don’t even know why they bothered to put an auto mode on this camera. This is the left side of the D7100, and there’s quite a bit to learn already. You have your pop-up flash button, a bracketing button, the lens release, and the AF/MF switch. Plus there are the loads of ports on the side in the form of a microphone port, USB terminal, HDMI out, headphone jack for videographers, and a GPS port for the accessories that are necessary. The back of the Nikon D7100 will also require some muscle memory adjustment, but native Nikon users shouldn’t have much of a problem. Here you’ll see the playback button and trash button in some familiar places. Along the edge of the LCD screen you’ll find some also very familiar buttons in the form of menu, white balance, quality, ISO, info (two of these), the Live View switch, the selector switch for the AF point selection (providing it isn’t in total auto) which is complete with a lock, the Auto exposure lock button, and the shutter control dial.

To take the most advantage of something like the ISO button, you’ll need to hold it down an look at the LCD on top. While holding the button down, you’ll need to scroll through one of the dials. One will switch the camera to Auto ISO while the other will choose a specific setting. The top of this camera is also really quite high end. On the left, you’ll find the mode dial that locks into place with each selection. Under that, you’ll find the drive switch. In between the left and right is the hot shoe with stereo microphones.

To the right is the on/off switch around the shutter release, video record button, exposure compensation button, metering mode button, and the LCD screen. As you can also see, the size of the camera overall isn’t extremely large, but in the right hands it could prove to be a bit too substantial.

In the past hour that I’ve had this camera, I’ve taken it out into NYC’s current snow storm. On my way to pick up a pizza pie, I slipped and fell on the ground. I protected the camera but the lens hood took a bit of a ding. The camera is still working in tip top condition after I brought it inside. However, it fogged up quite a bit due to the extreme temperature change.

When I got the unit, the battery was low and it is currently charging as I write this. But overall, the camera has survived more abuse than some cameras are subjected to over a lifetime.

The focusing speed with the D7100 was alright. I’m using it with the 18-105mm lens provided with it. In the low light of my apartment, it took a bit of time to hunt around and find a subject to focus on. But outside, it was a bit speedier. When it came to trying to track moving subjects though, it didn’t really perform to what I’ve come to expect from Nikon’s lineup. In fact, I believe that my D5100 that I used to own focused faster than this.

With that said though, Nikon’s D7100 has a significantly more complicated system, and I need to test it out more when it’s not being bombarded by a snow storm. To be fair, we will also be testing this camera out with other lenses.

Editor’s Clarification: This informal test was done using the full autofocus point selection. I stand by my statement as the D5100 tends to go more for the center focusing point rather than the ones outside. When it came to using a single point though, the D7100 won.

This isn’t a camera for a first time DSLR owner. We recommend that this be the camera that you step up to after some experience. Even if you give it to someone and they shoot in Auto all day and night with it, they will eventually find or hit a button that throws everything off for them.

Using this camera will be like cultivating and massaging a new relationship. If you want it to work out, you’re going to need to put the time into it and not abuse it.

At the moment, this camera can only show off JPEG samples because the raw files are not yet supported in Lightroom 4. Here’s what they look like. All images were resized for the web but had no editing done to them. At the time of publishing this post, I’ve literally had maybe around an hour of playtime with this camera so far. However, I’m actually liking it quite a bit. It feels pro, it feels like it can keep up with my work performance, and it also makes me think that there is still a place in the world for a DSLR with an APS-C sized sensor despite just how far mirrorless cameras have come that use APS-C sized sensors. I will be trying to test this camera with better lenses and for studio shoots and only then will we be able to see just what it can do.

However, I feel like no one will see its true potential until the RAW files are supported. As a former Nikon owner and a current Canon, Fujifilm and Olympus fanboy, I feel that this camera may soon be on the envy list of everyone. Nikon seems to have truly done it again.

This post is sponsored by Adorama as they have loaned us the unit for this review. You can purchase the Nikon D7100 body only or with kit lens directly from them.