Though I’ve reviewed the Leica M9 and M9-P before, I only recently had the pleasure of trying the Leica 50mm f1.4 Summilux

Summilux on the new digital bodies in real world use and street photography (I’ve used the former with a film body before). As readers of this site may know, I like the cameras; but have a major problem with their metering methods. Additionally, I tend to liken the images from the camera to chrome film in that one needs to nail the exposure perfectly and there isn’t a tremendous amount of versatility in the post-production process, though there is some.

So with all that aside, how do the lenses perform on the camera body? Shooting with the lenses wide open is an absolute joy, though focusing and recomposing with them isn’t as much of a joy. When you recompose, the plane of focus gets thrown off. The best option is to stop down, but if I’m purchasing a Leica f1.4 lens, then I bought it to shoot wide open. Instead, it would have been best if I just centered the dog’s eye. When an object is perfectly in focus and there is no recomposing involved, said area is extremely sharp. Tim’s glasses really pop in this image, though I’ve seen even more pop come from Zeiss lenses for DSLRs. Though Leica’s sensor (made by Kodak) renders images like Chrome film in terms of versatility and color, its lenses make things look even more film-like; especially when the images are color balanced better. Using the two lenses was extremely easy to do since their only components are manual focus rings and aperture rings. I set the camera to ISO 200 most of the time and set the shutter to auto: effectively giving me an aperture priority camera. However, at times I for manually set the shutter speeds. Ergonomically, both lenses felt great in my hands. Part of the reason for this is because the lenses are so small to begin with due to having no autofocus motors in them and the overall design of the rangefinder lenses. Additionally, the lenses also have a depth of field scale displayed on the top of them: therefore allowing you to focus out to a certain distance by making your best educated guess, lifting the camera to your eye and then touching up the focusing through the viewfinder. Then you just shoot.

I learned to do this while riding on the New York City subway. 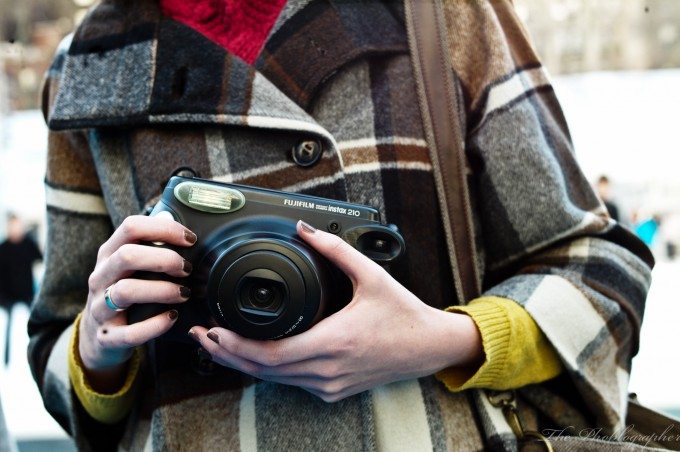 Stopping the lenses down a bit makes them even sharper. In general, I never stop these lenses down beyond f4 or f5.6. And if I stopped the lens down at all, I usually just stayed at f2 or f2.8. The reason why is because these lenses perform so well when shot wide open. Because the camera was also amazingly small and the lenses didn’t protrude out too much, I was also able to capture very candid moments that would otherwise be tougher to accomplish with my 5D Mk II, 35mm f1.4 L and 50mm f1.4 due to the giant size of it all. However, focusing out manually to a set area also helps quite a bit. Because these are f1.4 lenses, tracking moving subjects can also be very tough if you choose to shoot wide open. You’ll need to stop down a little bit in order to make manually tracking subjects easier for you.

Tracking those subjects can come with varying degrees of success. I failed to capture the blonde walking at lightning speed ahead of me in the photo above. To be fair, I was shooting at f1.4. These lenses are extremely expensive, but I’ve always said that Leica’s lenses are worth every penny. They are built extremely well (not weathersealed though), are small, feel good in the hand, have excellent image quality, and are easy to use. My only complaint is that it is relatively easy to get them dirty; as the 35mm lens that I was borrowing has dirt on the back element that I needed to clean in the photos. Additionally, I wasn’t able to see that dirt on the camera’s LCD screen (which is a major problem with the M series digital cameras.)

Though the Leica M cameras are capable of capturing wonderful images in the right hands, it is their lenses that have the main strength of the system. The new 35mm f1.4 and the 50mm Summilux are indeed top notch glass, if you can stomach their prices.