Which One? Canon 5D Mk II or Canon 7D for Wedding Photography 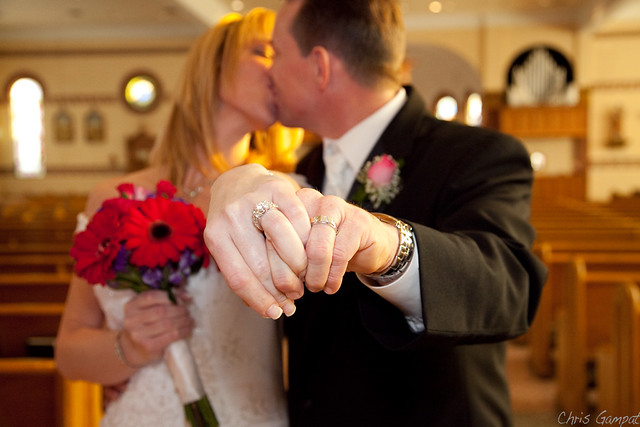 We believe that the Canon 7D

complement each other very well, but questions have arisen as to which one is better to get all the shots on your wedding photography checklist. Go onto the most popular photography forums and you’ll see this question appear at least three times a month in one way or another. We’re aware that in some ways this is like comparing apples to oranges, but it is a subject that is well worth exploring. David Ziser concluded that he’d rather go for the 7D; but is that right for you? We’ve noticed readers typing this into the search bar of the site—so since the 1D Mk IV is out of range for many of you, here’s your answer.

Before we go on, we’ve got the complete Canon 7D

review for you right here if you’re interested. Why no 5D Mk II? This blog was started well after I purchased mine. Also do note that this comparison is targeted towards still shooters vs video shooters. If I had to choose video, I’d choose the 5D Mk II for the manual sound control.

As a further disclaimer, I use both the 7D and 5D Mk II.

Best Features For a Wedding

– No complicated mathematics involved with the reciprocal rule of shooting

– If you want to use is as a video camera, you’ve essentially got the best of Canon’s lineup in your hands

– Despite more complexity, it is much more versatile than the Canon 5D Mk II

and allows a slew of different settings like RAW+JPEG, which can be very useful at weddings.

– An autofocusing system that puts the Canon 5D Mk II 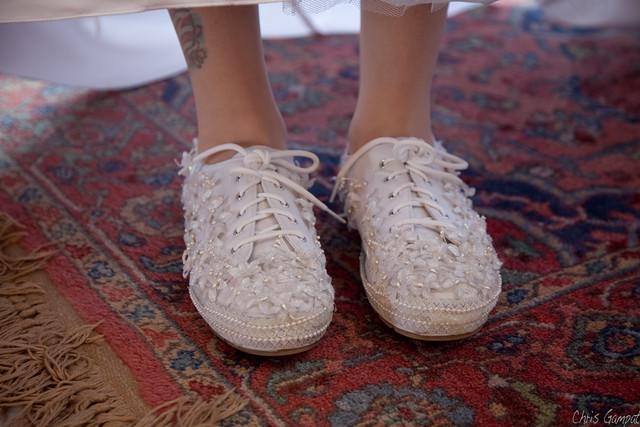 has a body that feels most similar to the old 40D—which was a staple of many wedding photographers for years and years. I’ve picked one up recently and then got my 5D Mk II back from Will after having loaned it to him for a while. The differences feel very minor. For more experienced shooters, you’ll probably appreciate this little bit of information. For shooters moving over to Canon, this isn’t always such a great thing.

With that said though, the Canon 5D Mk II

doesn’t feel as tough as the 7D. Further, every Nikon shooter I know states that if they were to go to Canon tomorrow, they’d pick up the 7D. Why? It feels like a Nikon. After spending a month using Nikon equipment and then going back to using my Canon gear, I can tell you that the differences in how the cameras feel ergonomically are different.

In my opinion, the Canon 7D

feels more like a serious business camera that is meant to take abuse. The 5D Mk II feels a lot more elegant; and when shooting a wedding many photographers may appreciate having less buttons—especially where moments happen very quickly like when the pastor says, “You may now kiss the bride.”

That’s not to say that either one wouldn’t be great for wedding photographers. This is really a personal taste more than anything.

If you’re a street photography/photojournalistic shooter, you may want to go for the Canon 5D Mk II

because of the way it feels and because it is lighter even by a little bit (all the extra weight off counts.) If you’re also a Canon veteran, the 5D Mk II will feel like you’re right at home. If you love more of a studio look to your images, go with the 7D. This also applies to those considering switching over to Canon. Finally, those with smaller hands may actually appreciate the 7D lots more as I’ve seen how my assistants’ hands tend to conform to the body better. Thankfully, I haven’t dropped my 5D Mk II or my 7D. The most punishment that they take comes from my camera bags and being bumped by people. Neither camera has suffered significantly from that.

There is another issue though tied into durability: and that is keeping the sensor clean. The 5D Mk II‘s sensor gets dirtier significantly more often than my 7D‘s does. I’ve had to take the 5D Mk II in for servicing many times because of this until going back to using my Arctic Butterfly (review here). My 7D has always only needed the Arctic Butterfly—there is never anything on the sensor that would cause a significant problem.

To diverge to videography for a second, try shooting video with something on your sensor—you’ll be screwed!

Now back to photography. The Canon 5D Mk II

has a stainless steel internal chasis according to B&H but magnesium alloy according to DPReview. There is also a lot of rubber to keep dust and water out. The camera is marketed as weather and dust resistant.

has a magnesium alloy chasis with environmental sealing. DPReview states that the camera has the same magnesium allow as the 5D Mk II. The Canon 7D

overall feels much better constructed than the 5D Mk II and it is heavier by a small fraction. If I was in a very rough environment, I’m positive that either one would be able to stand up to the elements but for the sensor cleaning problem alone I’d probably still with the 7D.

because of the more durable and denser feel to it (luckily, mine are all careful.) In rain environments, either camera may be able to stand up to the punishment, but the 7D may be just a bit better. 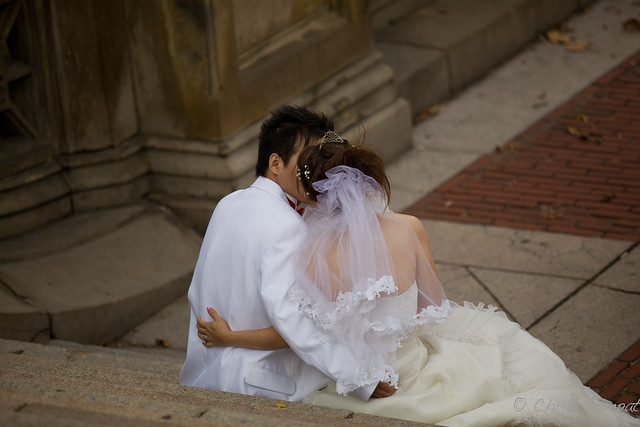 As stated earlier, the 7D‘s autofocus really beats the Canon 5D Mk II‘s, so let’s talk about the latter’s first.

The 5D Mk II has 9 selectable autofocus points. When going into the custom menu though, there is an autofocus expansion option as well as a customized setting to allow the back joystick to select which particular autofocus point you’d like to use. This isn’t available straight out of the box, you need to unlock it! I talked more about this in my test at the Mermaid day parade. The Canon 5D Mk II

is also only able to select one focusing point at a time vs zones and other areas like the 7D‘s.

has 19 autofocusing points and all are cross-type: meaning that one focusing point can be expanded to work with those around it. Additionally, there are different focusing modes: Single point/ Spot/ AF point Expansion/ Zone. For most of my work, I typically use Spot for the most precision and accuracy of focusing on someone’s eyes.

Because of the different focusing modes, the Canon 7D

is not only able to focus faster than the 5D Mk II, but it is also much smarter. If a child is running across the pews at church, switch to zone and follow the kid moving. Also ensure that you’re in AI Servo mode. It is also much better when focusing in the dark and you’ll be able to capture many more “keeper” shots than those being thrown away in Lightroom 3.

At this point, it should also be noted that these cameras perform best with lenses that are F/2.8 and wider. Most lenses in a wedding photographer’s bag, in fact, are this fast.

For photographers like me that want to nail the composition in camera and do less cropping afterwards, get the 7D. The grid lines in the viewfinder that can be unlocked will help immensely when combined with smart use of the autofocusing points. There are many photographers that always use the center and then recompose: the 5D Mk II is for them. Either option is valid as long as you get it to work.

But there is another factor to consider that I bring up often and that should be considered for all practicality when shooting a wedding. Putting a flash like the 580 EX II or the more affordable 430 EX II on the 5D Mk II can vastly improve its autofocusing abilities in any type of lighting because of the infrared beam of light working with the focusing system. In fact, you’ll almost never miss a shot. If you’re shooting a wedding, you’ll most likely have a flash or two of some sort—or at least you should! 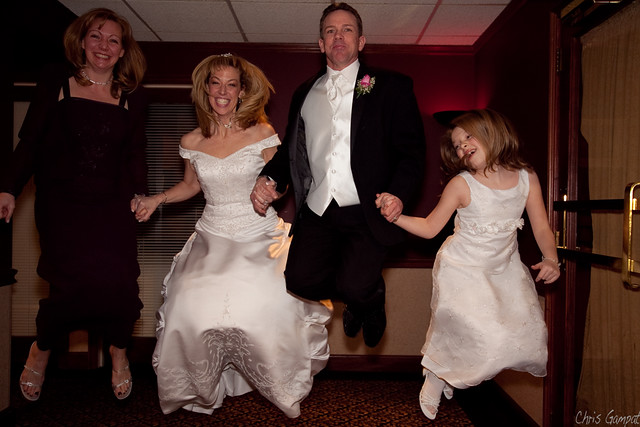 Once again,we’re getting into nippy territory here. Why? Put the Canon 5D Mk II

As stated earlier, the 5D Mk II has a much slimmer menu system due to less features and there are a lot less buttons. If you’re button-phobic, then maybe the 5D Mk II is for you. It is a lot more elegant in looks because of the simplicity as well.

In contrast, the Canon 7D

has wireless flash control and a much more complicated functionality list. It was designed for this though and it was Canon’s first larger step into merging camcorders and DSLRs with the buttons, their improved autofocusing system and being able to control their flashes via an infrared signal.

It’s really up to the user in this case. Do you want to make use of a lot more features? If so, go with the 7D. Do you want better images as a natural light photographer? Then the 5D Mk II is king.

Meanwhile, my 5D Mk II‘s name is Dahlia, so she is my queen 😉 At the higher ISO settings, a photographer will get much cleaner images from the 5D Mk II. Despite the dual DIGIC 4 processors of the 7D, it still cannot keep up with the 5D Mk II‘s full frame sensor.

Consider this though: a Canon 5D Mk II

user always shooting without the flash will more than likely crank the ISOs up very high. This isn’t always true though, if they have a pair of Pocket Wizards or a pair of 580 EX II flashes, then they’ll be manipulating the light around them and can keep the ISOs down.

With the 7D, all you need is one extra flash in most cases in the right place. Because of the wireless flash control, the ISOs can be kept down. Once again though, at higher ISOs like 6400, it cannot beat the 5D Mk II.

At the end of the wedding, each camera has their own unique strengths and weaknesses. Additionally, you’ll never be able to use any of this information to pitch yourself to a bride. Instead, you’ll need to demonstrate to her and her groom how well you can document the entire process and you’ll need to sell yourself very well. Ensure that you’ve got great lenses when using either camera and that your lighting is the best it can be.

If you really had to go with one choice over another: if you’re coming over from another system, get the 7D. If you’ve already got an investment in Canon, get the 5D Mk II.

I’ve got both cameras and a number of lenses that I use along with flashes and light modifiers.

Let us know in the comments below, we’d love to answer them for you. You can also ask us on our Facebook page where you can show us your wedding photos and enter them into our contest.