KONO!RAMA: The Most Exciting Thing in Instant Photography Right Now 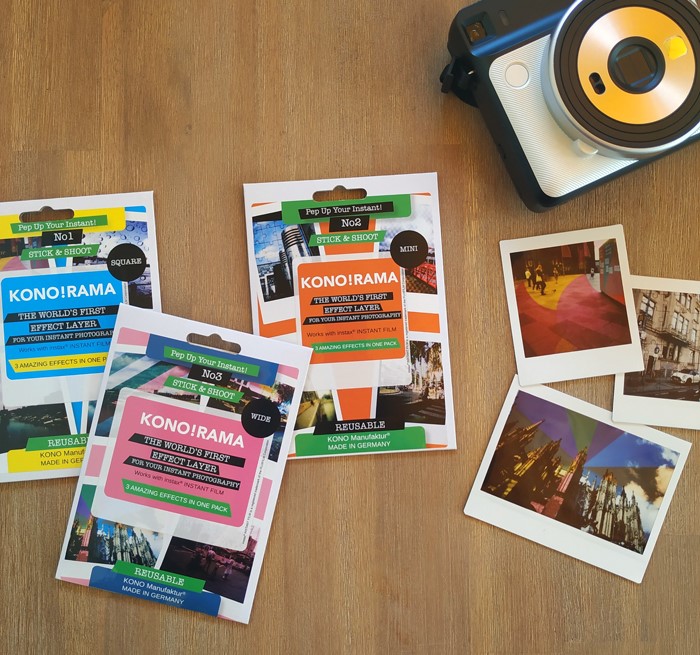 The KONO!RAMA plays off of a very cool, forgotten idea and adds it to Instax film.

Many years ago, photographers put color filters in front of their lenses. It delivered a fun effect if it wasn’t correcting for the lighting. And that’s what the KONO!RAMA is doing in a far more innovative way. The front lens elements of many cameras are various sizes. To get around that problem, you just place the KONO!RAMA right in front of the film pack before loading it up. As you shoot, the effect is applied to the entire pack of film. It breathes new life into your old camera, just in case it’s been in the corner gathering dust. We’ve got more on the KONO!RAMA after the jump.

The KONO!RAMA comes available for Instax Mini, Square, and Wide. Each pack has 1 tutorial, 6 adhesive strips, and 3 layer effects. Just in case you were wondering, they’re reusable. And they also only work for Instax. (Sorry Polaroid users, some of us prefer real film!) There are various color and imaging effects. Of note is the really excellent raindrops effect. Another effect emulates the Northern Lights on Instax film. And yet another makes it appear as if your image is a bunch of puzzle pieces. There are three different packs, and each is available for Instax Mini, Wide, and Square variants. You can pack them into your Fujifilm, Lomography, or MiNT film cameras with ease. That’s one of the most exciting things about this.

It’s pretty easy to get the effect too. Using the adhesive, you attach it to the film pack. Specifically, you stick the KONO!RAMA right in front of the dark slide. Then you load the film into the camera and eject the dark slide. Now everything you shoot will have that cool effect on it. I’m sure the effect varies depending on the lenses used. A Lomography Diana F+ with the Instax back will give off one look. Using something like the Northern Lights effect probably won’t translate well into Instax Mini Monochrome, but it would be very cool to use the raindrop effect with it. Just be sure to not throw away the KONO!RAMA after each film pack’s use.

Each pack will cost you around $17.99. That’s not too bad considering that they’re reusable. Be super careful with them if you buy one. They’re very affordable. In fact, Instax overall became so much more affordable. A few weeks ago, MiNT allegedly announced that you can get free film for life by buying a camera from them. That’s quite a statement. Arguably, they make the highest quality Instax camera on the market.

What we find very fascinating is KONO!’s no light loss claim. They tell us that they had to find the right mix of materials, thinness, and color. Above all, the product had to be reusable. “The light is cut in the vignette of the Shadow Play, obviously, and to a certain amount in the parts of the layers called Austin and Umbrella which are filled with darker colors but not in the transparent parts and only a little bit in the lighter parts, which physically can’t be avoided,” is what we’re told by our rep, Uwe.

Hopefully, the KONO!RAMA will open the Instax market up a bit more. I see the apparent appeal to current buyers. But the cool factor is a big one for anyone else. Instax is still in a very odd spot. MiNT went ahead and made a camera that has manual settings, and no one else has followed suit yet. But I feel they need to. I’d personally go nuts over a Fujifilm option. And if I added these little strips over the film, I’d be enamored. However, Instax just refuses to be more serious. And I’m not sure why they can’t appeal to a more discerning market segment.

Personally speaking, I’d also love to see a pre-exposed film if something like that would even be possible before the emulsion fluid goes through it.

You can get KONO!RAMA on the official website or at Freestyle.