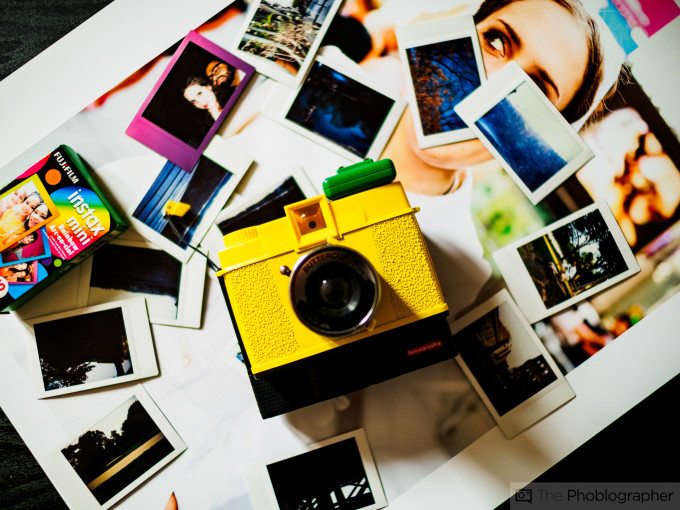 I honestly never thought about or intended to do a review of the Diana F+ Instant film back–you see, for me film has always been a very personal photography medium. Digital is generally for my more commercial work and for this site (though I’ve got some personal digital work), but film has always been something more personal. I’ve never done a paid gig involving the use of film–though when readers kept seeing images of the Diana F+ with an Instant film back in my reviews, they asked via email, comments, and tweets for a review.

Indeed, the Diana F+ is the single most versatile camera out there that lets you shoot with Instant film. With a fixed shutter speed (unless in bulb mode), a fixed ISO on the film, and a variable aperture setting, you’re bound to be able to create the images that you really want with some resourceful thinking.

In fact, at the publishing of this review, it’s one of my favorite cameras in my apartment.

The Diana F+ was combined with the Instant film back to create the images. The Diana F+ is what you’ll be using with the Instant back. The back is pretty large, so it’s going to extend out of the normal base plate. However, it still makes for a great ergonomic grip. It works with any Diana F+ camera–which are generally designed to be used with 120 film. The Instant back is powered by a single battery that goes into the side. I’ve been using it for a very long time and probably will last way into next year. They’re easy to get off of Amazon. To connect the back to the camera, you’ll need to insert the back into the camera and make sure that everything clicks together securely. Part of that process will involve this lock. Once the back is installed, you power it up using the switch near the bottom of the back. To confirm that it’s on and working, you’ll see the blue light appear.

Here, you’ll also find the film loading door, and a big button to print the film. The back opens up to accept the Instax film in a way similar to many other cameras. You’ll line the yellow tabs up, close it up, press the button to get rid of the dark slide, and get ready to shoot. The top of the back comes down below the viewfinder, so you can kind of see what you’re shooting. I really recommend using it so that you don’t waste Instax film. However, I wish that there were a more elegant way of doing this. Still, it makes you pay more attention to the images that you’re about to shoot.

Note that this isn’t a through the lens finder, so instead you’ll need to compensate with your mind. Despite this being a mostly plastic fantastic offering, the Lomography Diana F+ Instant film back is built pretty darn solid. It’s fallen, been thrown around in camera bags, been on tripods, been through tough weather and terrain and it’s always held up fine. In some ways, I’d say it’s better built than the Diana. Installing the Diana Instant Back is pretty simple. You’ll need to remove the standard 120 film back, insert a correction lens behind the lens mount, and then install the Instant back. With all this said, you just load the film into the back the same way that you would with a normal Instax camera. Otherwise, it works like a normal Diana F+ camera. Diana cameras shoot at a constant shutter speed and have variable apertures based on the shooting situation. It has one set for Sunny, Cloudy, very cloudy, and pinhole. What I feel is very important for me to state is that your own individual experience will vary. Diana cameras vary in quality and so some have lenses with more light leaks and others have different characteristics that work for or against the image depending on how you think about it.

For example, the image above is of my ex-girlfriend. It was shot while we were dating with the camera being pointed right into the sunlight. Sure, there are flares like crazy but I honestly think that it’s a beautiful image. This image was shot with Color Instax in pinhole mode, scanned and converted to black and white. The film got dust on it during the shooting process and the scan added even more to that. It reminds me of how much I really think Fujifilm needs black and white instax film. 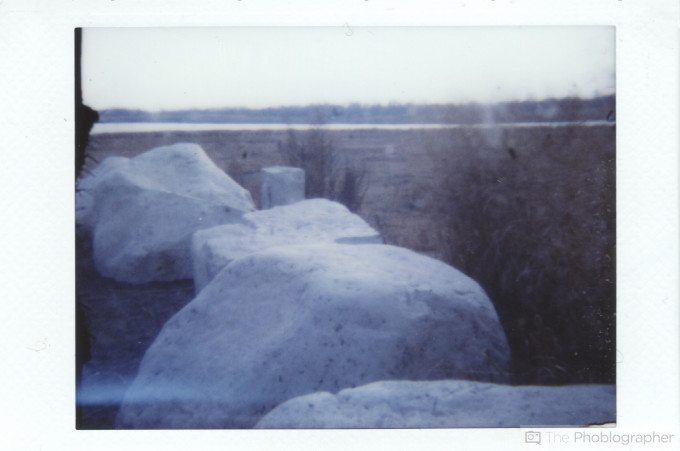 Are you ready for an evaluation that some will call super hipster while others will relate to? Okay.

I flippin’ love this thing. I’ve always been smitten with instant film. The fact that you can shoot a photo and have it ready instantly or nearly instantly for you is amazing. The tangible image is something that you don’t necessarily forget. Sure, lots of these images stay in a box in my desk–but for what it’s worth I always take them out occasionally and look at them. In contrast, I have loads of images on Flickr, Facebook, etc. I never go through them religiously and flip through. Heck, I barely even go through my own portfolio.

However, this instant film back makes me think about images differently. I know that they’re going to be flawed and I’ve got to find a way to fight it, embrace it, and find a way to create the best image I can. If I can’t, then so be it. But it also just makes me pay attention more to the light around me because of the way that a Diana F+ works.

The Diana F+ Instant Film back receives five out of five stars. It’s wonderful. It helps me create wonderful photos that I’ll actually care about. And hopefully, it can do the same thing for you.

Want one? Check out Amazon for the latest prices.