While instant cameras are great fun at parties, the Canon IVY CLIQ’s ZINK prints will leave you wanting more.

The popularity of instant cameras has seen a resurgence in recent years, and the IVY CLIQ is the Canon’s entry-level product targeted at this market. Fujifilm is currently dominating the instant camera market with their various Instax cameras and printers. Canon is hoping to compete by pricing the IVY CLIQ at just under US $100. Lacking some of the features of the more premium IVY CLIQ+, the IVY CLIQ is a no-thrills instant camera that creates photo prints using Polaroid’s ZINK Zero Ink Technology. The prints have a peel-apart back that turns them into stickers as well. The compact size of the IVY CLIQ allows it to fit into most pants and shirt pockets, making it easy to carry around. Is the Canon IVY CLIQ the right instant camera for you? The front of the Canon IVY CLIQ is minimalist. The camera’s front element is surrounded by a large black plastic ring, likely to emulate the look of much larger lenses. A tiny, fingernail-sized selfie mirror can be found adjacent to the camera’s front element. Also visible on the front of the IVY CLIQ are the small LED flash and the optical viewfinder. 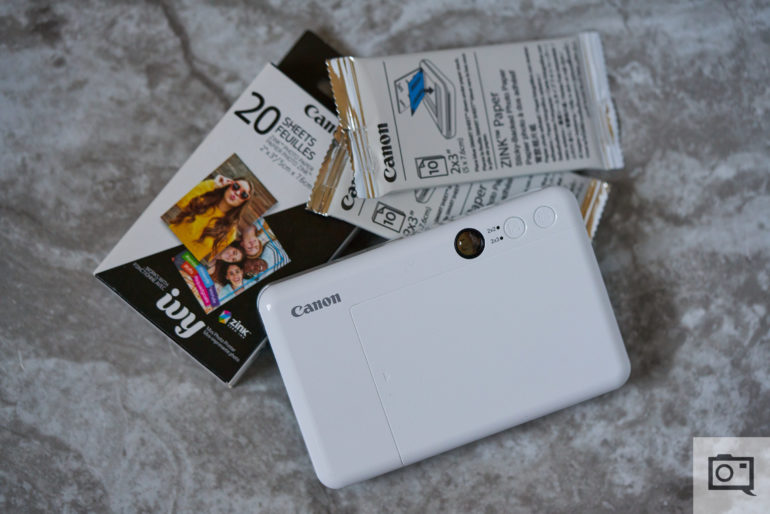 The minimalist design continues on the rear of the IVY CLIQ. The rear of the camera is covered with tiny bumps that give the back of the camera some texture, making it easy to grip. Most of the space on the back of the camera is taken up by the ZINK paper compartment’s cover. Above the cover, you’ll find the optical viewfinder, the print aspect ratio button, and the reprint button. You can choose whether the IVY CLIQ will print rectangular 2″ x 3″ prints or square 2″ x 2″ prints using the print aspect ratio button. The reprint button will reprint the last image taken with the IVY CLIQ, handy for when you want to give copies of selfies to friends at a party. Looking at the top of the IVY CLIQ, you’ll find a status light, the power button, and the shutter button. Finally, we move to the bottom of the IVY CLIQ where we’ll find the micro USB charging port, microSD card slot, and the small reset hole.

The Canon IVY CLIQ is a lightweight instant camera that can fit into most pants and shirt pockets. While the plasticky exterior of the IVY CLIQ helps keep the camera’s weight low, it also gives it a toy-like feeling in hand. A rugged camera the IVY CLIQ is not, so you’ll want to handle it with care, but the back of the IVY CLIQ does feature tiny bumps that help give the camera extra grip. If you’re accident prone, the included wrist strap will help minimize the chances of dropping the camera. During our time with the IVY CLIQ, the ZINK paper compartment cover slid open unintentionally on more than one occasion. If you’re storing the IVY CLIQ in tight pockets or compartments in your bag, you’ll want to be careful not to open the compartment accidentally when pulling the camera out. Having ZINK paper fall out of the camera was quite annoying. A revised rear cover design would be welcomed should Canon revise the IVY CLIQ’s design in the future. We’d also like to see a redesign of the power and shutter buttons in the future. It was very easy to accidentally turn on the camera and capture unintentional photos.

The Canon IVY CLIQ is a straight forward camera to use, with no manual controls. It’s basically a fully automatic point-and-shoot. While the IVY CLIQ has an optical viewfinder, the frame lines aren’t the most accurate. They are really there to give you a general sense of what your framing will be. Your best bet is to treat the camera like a point-and-shoot and don’t think too much about your composition. There is a fingernail-sized selfie mirror located next to the camera’s front element. You’ll have a hard time taking selfies with more than two or three people because it’s difficult to see anything in the tiny selfie mirror. We much preferred the larger selfie mirror that’s on the front of the Canon IVY CLIQ+. The IVY CLIQ also lacks the ring flash found on the higher-priced IVY CLIQ+, and it has a smaller sensor as well (five megapixel instead of eight). This leads to some rather lackluster images. Although the IVY CLIQ has a microSD card slot, you cannot capture any images with the camera when it’s not loaded with ZINK photo paper. In all honesty, we wouldn’t suggest using the IVY CLIQ as a digital camera. As long as you’ve got a phone that was made within the last few years, chances are it’ll take better photos than the Canon IVY CLIQ. It’s a basic instant camera, nothing more. Unlike the IVY CLIQ+, there’s no Bluetooth or wireless connectivity on the IVY CLIQ. As such, you won’t be able to send photos from your phone to be printed on the IVY CLIQ.

The autofocus on the Canon IVY CLIQ is fairly basic, with no manual adjustments possible. It will do fine focusing on stationary subjects that are nearby. Anything in motion will more than likely come out blurry. You basically press the shutter button and hope for the best.

Thanks to its five megapixel sensor and plastic lens, images produced by the Canon IVY CLIQ are quite soft and have low contrast. The softness intensifies as you move towards the edges of the frame. While you can save JEPGs of the photos onto a microSD card, you really shouldn’t use the IVY CLIQ as a digital camera due to its lackluster image quality. You’re better off shooting with your phone’s camera if you don’t have a dedicated digital camera at your disposal. The ZINK photo paper isn’t doing the photos any favor either. The ZINK prints look dark and muted when compared to the JPEGs. There’s also a noticeable blue color cast as well. The IVY CLIQ’s auto-white balance is often inaccurate. The camera also has a tendency to overexpose images, particularly when the flash is fired. We also found the IVY CLIQ to crop images in by about 10% on each side when printing. You’ll want to take this into account when composing an image and leave some extra room on the periphery. Here are some additional straight out of camera JPEGs that we shot with the Canon IVY CLIQ. As a matter of ethics, none of the sample images seen within this review have been retouched so that you can judge the quality of the images produced by this camera for yourself. The Canon IVY CLIQ captures 2×3 jpegs even if you have the print aspect ratio set to 2×2. Canon’s decision to use ZINK as their media of choice for the Canon IVY CLIQ is disappointing. Even the best images look like they were taken with a flip phone once you print them on ZINK photo paper. This is a shame when you consider that Canon makes some of the best photo paper in the industry. Despite its competitive price point and pocketable form factor, the Canon IVY CLIQ lacks a lot of the niceties found on the more premium Canon IVY CLIQ+ while inheriting all of its drawbacks. Unlike the IVY CLIQ+, the IVY CLIQ lacks Bluetooth connectivity. As a result, you can’t send photos from your phone to be printed. The IVY CLIQ also eschews the round selfie mirror found on the IVY CLIQ+. What we’re left with is a laughably tiny selfie mirror that’s basically useless if there are more than two people in the frame. The smaller five megapixel sensor produces poorer quality images than the eight megapixel sensor found in the IVY CLIQ+. We understand that Canon had to make a lot of sacrifices in order to shave an extra $60 off the price of the IVY CLIQ+, but to what end? There’s only so much you can strip away from a product before it becomes pointless. Despite the IVY CLIQ’s lower cost, what little functionality that remained after stripping the IVY CLIQ+ bare results in a single purpose product that isn’t worth the price of admission. Spend the extra $60 and go for the Canon IVY CLIQ+. Or better yet, consider the various Instax options that Fujifilm have to offer. None of them use ZINK photo paper, thank goodness.

The Canon IVY CLIQ Instant Camera earns Two out of Five Stars. Want one? Head on over to Amazon.