The Sony a7r IV Has Problems That Should Be Fixed in Time, We Hope We had a moment to really think about the Sony a7r IV, and its problems can be fixed.

Who are the photographers that are going to be satisfied with the Sony a7r IV? That’s the question I was asking myself this entire week as we spent time on the Sony media excursion. Its predecessor was a workhorse for many photographers who required the resolution but who also needed to adapt to the changing media landscape. The Sony a7r IV takes those ideals and offers even more futureproofing. With a 61MP full-frame sensor, 15 stops of dynamic range, 6K video, an audio interface, and improved autofocus in line with Sony’s latest ideals around the use of AI technology, the Sony a7r IV is bound to be a powerful machine. But while the Sony a7r IV is bedazzling everyone with all of these fantastic features, they didn’t get it totally right.

Editor’s Note: We spent time with the Sony a7r IV while on a media excursion that was fully paid for by Sony. We made efforts to work with the units, not only on Sony’s sets, but by setting up some of our own shoots. We even went so far as to not use their lighting. We state this as a matter of transparency: it’s more and more important to be upfront with our audience in the world of the influencer. We are not influencers. With the Sony a7r IV, I genuinely thought Sony had learned their lesson. We sort of got it in the form of firmware updates and with other releases, but the company has abandoned a big part of what made their system so good: the PlayMemories store. You may call me salty, but there was a ton of innovation Sony cameras were capable of if you downloaded and purchased the apps. The PlayMemories market was done away with with the release of the Sony a9 and, after that, so much was lost.

We reported on some of these a long time ago, but some of those features were:

But there are a few amazing features that are now gone. Sony had something called Touchless Shutter that basically let you fire the camera’s shutter by waving your hand at the eye-sensor. It helped with ensuring that you didn’t need to touch the camera in any way to get a photo. It was pretty brilliant. Perhaps what I’m most disappointed by is the lack of a functional, robust multiple exposure mode. At the moment, Canon’s is the best I’ve been able to work with by far, and Fujifilm’s is okay. Olympus used to be the leader here, but not so much anymore. Why not just do it in post? Well, I really don’t want to. I strive to get the image as best as I can in-camera, without needing to edit. Truth be told, I can be lazy. Sometimes I just want something done right the first time around. Sure, your retouching skills may enable you to produce some amazing things with a portrait, but try shooting film. When you do it right, you won’t need to work in post at all. This exact idea and spirit appeal to me with multiple exposure mode as I grow creatively.

“Sony had this feature called Touchless Shutter that basically let you fire the camera’s shutter by waving your hand at the eye-sensor.” During our tests, we found that the Sony a7r IV has autofocus issues with face detection in low light. We didn’t see the problem occur otherwise. The company has been touting how reliable the autofocus system is, and for what it’s worth this problem really slowed down our ability to shoot at night. When using a Profoto B10, we had to pop the modeling light at times since we tend to turn off the AF assist lamp. (I don’t know a single photographer who uses that thing.) 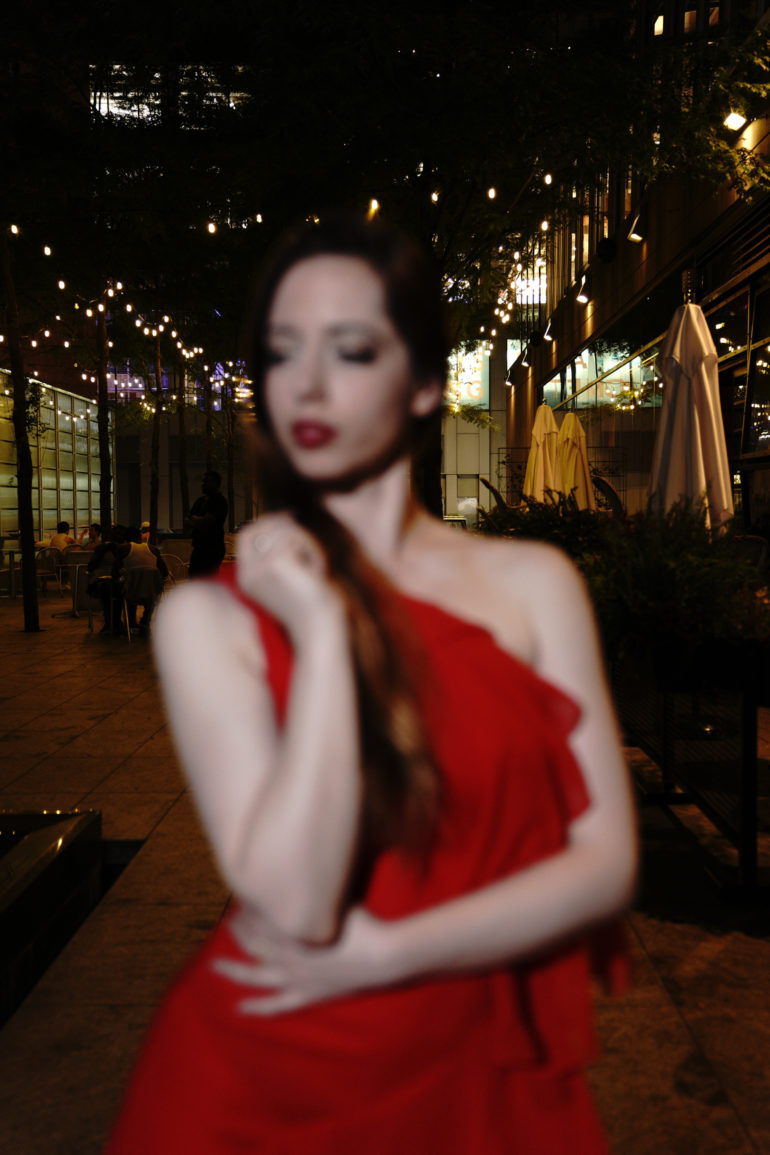 The Sony a7r IV is supposed to track a moving subject in low light and keep their eye in focus. The demos Sony showed us applied to ideal lighting situations. In low light, this suffered. I guess what that means is your subject needs to be well illuminated, even in low lighting situations. That’s fair. To be honest, we as photographers should be exercising proper lighting techniques to make our subjects look better in the first place.

We talked about this problem in our previous report, and you can find more image samples there as well.

“The demos that Sony showed us applied really to ideal lighting situations. In low light, this suffered.”

Why Is the Touch Screen Still Useless? This is something that’s really irking me: why hasn’t Sony set up the touchscreen on the camera to actually be functional? We’re not talking about using it to change the focusing points. In fact, that makes my argument even stronger; the Sony a7r IV has a great joystick. It’s beautiful. But that touchscreen? Why the heck can’t I tap two areas to get immediately to the toolbox menu and then to the page for formatting the memory cards? Granted, the menu scroll is a million times faster, but that’s still not a solution. The quick menu is also arguably slow to get to.

The rest of the industry is doing something and so too should Sony. If Sony adopts it, I’d fully expect to hear cries from other manufacturers saying they had this said feature before. It will be synonymous to that of the Android and Apple wars.

“Why the heck can’t I tap two areas to get immediately to the toolbox menu and then to the page for formatting the memory cards?”

But Is It All Bad? While I’m pointing out the problems with the Sony a7r IV, I have to admit that it’s not all bad in any way. By far, this camera sets the standard for many cameras to come. It’s fantastic; I’m most likely going to purchase one and keep my Sony a7r III as a backup. And Sony could create a camera that is truly unbeatable if they fixed these issues.