The Yashica Y35 isn’t to terrible of a camera; but it’s surely difficult to wrap your head around.

I purposely have taken my time reviewing the Yashica Y35 to figure out if it’s really as bad an awful of a camera as some folks are making it out to be. For the uninitiated, the Yashica Y35 is a camera that was funded and created off of Kickstarter. This isn’t the original Yashica, but instead a Hong Kong company who took it over and decided to create something fundamentally different from most other cameras out there. To emulate the look, feel, and experience of film cameras the company created a camera that doesn’t have a back LCD screen and that requires you to buy film packs to get a different look. Then you plug your SD card into the camera and get the images. On top of that, you’ll need to shoot then advance the film lever, and only then can you shoot again.

For the photographer who wants to get into film, the Yashica Y35 is genuinely the most authentic option to merge both digital and film presented as of the publishing of this review. Simply not chimping the LCD screen won’t do it. On top of that, the Yashica Y35 shoots only JPEG images. This will most closely emulate the experience that the modern film shooter does: shooting the film, processing them at a lab and then getting the scans back. Of course, it means that we’re not getting the most from the photos as we can’t go into a darkroom and edit the files. And to be fair, I think that that would ruin the experience.

Though I’m giving the Yashica Y35 praise thus far, I’m not at all saying that it’s not going to eventually end up just being something in my apartment for display. To be quite honest, there are better options out there.

We used the Yashica Y35 with the black and white 400 ISO film pack and the ISO 200 slide film pack.

Specs taken from their Kickstarter The Yashica Y35 looks like a cheap version of a Canon QL17 in some ways. The front is very minimal and has a rangefinder look and aesthetic. It’s low key handsome; but when you look at it the Yashica Y35 obviously looks like a toy. The Yashica Y35’s top has a few controls. The left side, being the hot shoe and the film rewind, are pretty useless and do nothing. Then there is an exposure compensation dial, the shutter dial, the on/off switch and the film advance. That’s it. This side is important because it’s how you get into the Yashica Y35. This switch is a bit tough to work with though. Here’s the back of the Yashica Y35. It’s plain jane. Pop the Yashica Y35 open and you’ll find the brains. It requires the film pack and those two AA batteries. For what it’s worth, the battery life is pretty damned great. 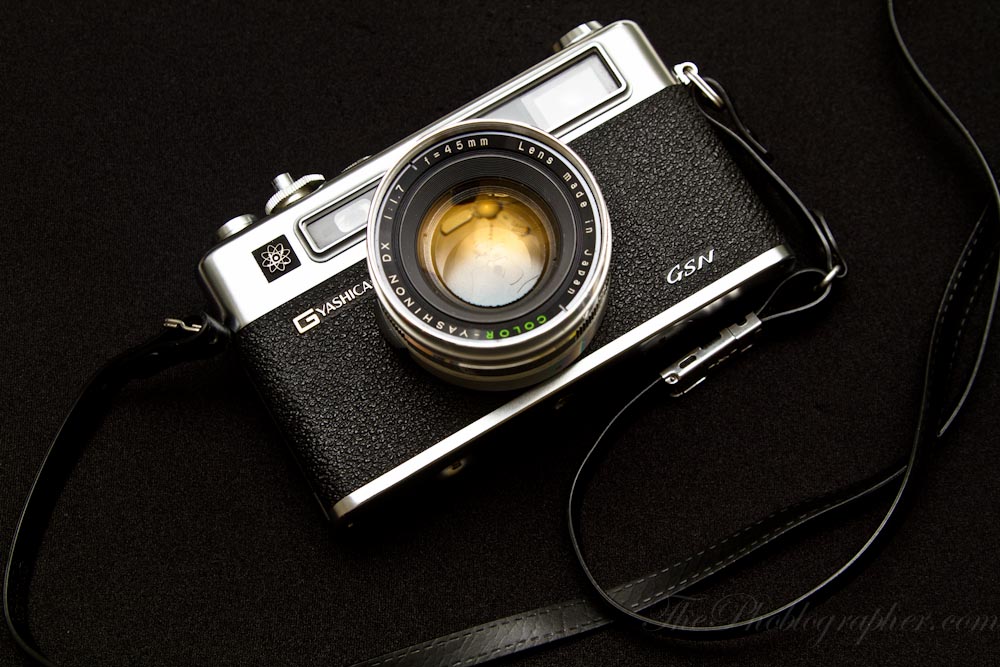 I’m comparing the Yashica Y35 to the gold standard: the Yashica GSN Electro 35. The latter is built better in every single way. And there is no comparison. To be fair, that camera is all metal and uses actual film. It was my first serious film camera when I got back into film photography years ago. It spent some time with my mother and when she passed away, I donated it to the Lomography company. Would I buy one again? No; I’ve thus moved onto Leicas. And in all seriousness, the Yashica Y35 isn’t coming close to what a Leica can do.

The Yashica Y35 is getting three out of five stars here. The Yashica Y35 is quite frankly a complete piece of crap when it comes to the build quality. I’m not sure that I can put it any other way. Want to give this camera to a child? They’ll break it. It feels like the cheapest and most toy-like camera I’ve ever held. It’s right up there with something along the lines of a Diana camera. With that said though, My camera held it together really well and I treat it like an egg. But if I give it some roughing up, I’m sure that it will break.

One of the flimsiest parts of the new Yashica Y35 is the SD card door. That’s on the bottom. Trying to get it open is pretty difficult but once it is open it feels like it can easily break right off. Then there is the film back door. This switch is sort of difficult to slide–much unlike an actual film camera. The camera that I’m going to compare this to is the Fujifilm XF10–simply because I’m right now testing that camera out. The XF10 is not at all expensive and according to what Yashica has been telling backers via Kickstarter, I really have to say that the Yashica Y35 isn’t worth well over $600. It’s worth maybe between $250 and $300. At the $499 price point that the Fujifilm XF10 is at, the Fujifilm is built better, gives you manual controls right where you need them in the form of three dials and a joystick, has a touch screen, most of the film simulations that you want and knew from the Fujifilm XT1 (pre-Acros, post-Classic Chrome) and autofocus performance that is really good.

The Yashica Y35 doesn’t feel bad in your hands though despite the plastic feeling. In fact, it’s laid out pretty well. The Yashica Y35 is a much different experience. When you get the camera, you’ll need to attach a camera strap to it. Then you’ll need an SD card to put in the bottom of the camera and two double A batteries in addition to your film pack.

This all sounds pretty straight forward until you realize one major problem: you absolutely never know what the shutter speed will be. There isn’t a single way to figure that out. So if you’re using ISO 400 film in a very dark environment then you don’t know just how long you should be holding your breath and handholding the exposure for. However, there is an exposure compensation dial. Again though, how are you supposed to know what exposure you’re getting if you don’t have any idea of what it will be in the first place.

This may sound familiar if you’re a Lomography LCA camera user. The Yashica Y35 camera has an electronic shutter sound, so its consistency will never let you know how long the shutter actually is. In comparison, the LCA has a mechanical shutter and you’ll know what you’re getting because you’ll hear it open and close. To that end, the Yashica Y35 is a good learning tool because it teaches you what to expect from a scene that digital allows you to do, but provides you with too many temptations of an escape.

The Yashica Y35 has a variety of film options, but I only used the Black and white 400 option and the 200 slide film option. The slide film option is disappointing and shows off how low quality the lens is with purple fringing galore. To that end, I thoroughly enjoy the black and white look; but I can’t put my finger on what film it looks like. It doesn’t at all remind me of Tri-X.

For that reason, we’re giving the Yashica Y35 three out of five stars.

Here’s another pretty big problem with the Yashica Y35. It is pretty much forever focused out to a reasonable distance away. Anything that is five feet away from you will be in focus, sort of. Then anything at infinity will surely be in focus. But if you want to shoot anything closer, you’re out of luck. The Yashica Y35 has a lens that was talked up quite a bit in the Kickstarter campaign but I don’t ever remember it being only focused out to a further distance away. So there is no focusing. Any to be honest, that’s annoying.

Yes, it’s a small sensor. But I think I should be able to control whether or not I’m focusing via a zone focusing system on the lens.

Coming back to the Fujifilm XF10, I get full autofocus. The autofocus isn’t the best or the newest options from Fujifilm, but it’s workable. Here’s another reason why I’m leaning towards Fujifilm. Call me a fanboy of Fujifilm if you want, but can you blame me for a company giving me an option to autofocus?

The Yashica Y35 deserves two stars. If you like shooting buildings and street photography at a distance then you’ll probably be okay. But otherwise, what the hell is the point?

The image quality from the Yashica Y35 depends heavily on the film pack that you’re using. Full disclosure, this lens isn’t really plastic, but it’s sort of lo-fi in its image quality. It produces a fair amount of purple fringing–and old school cameras and lenses did that. But that has been fixed in modern film photography with better coatings on the lenses. By far though, the black and white film pack is superior. The images look like film scans with the grain effect, but I can’t for the life of me nail down what film the black and white looks like.

On the other hand, the 200 Slide film looks like an older version of Provia.

Go black and white and don’t look back.

For image quality, I’m going to compare the Yashica Y35 to actual film in the 35mm format. And for what it’s worth, I genuinely like the look of film so much more.

The Yashica Y35 gets three stars out of five for image quality.

I think that the Yashica Y35 is a nice learning tool for a photographer who needs it. Otherwise it’s a toy. I genuinely knew that I’d be taking this risk going in and backing the campaign. I’ve seen some serious vitrol spilled at people who backed the campaign with the same fervor of political conversations that I see on Facebook. But I’d like to remind the world that this is a camera, it isn’t that serious, and Yashica should be given points for doing something that the Japanese have been refusing to do for a very long time. In conversations that I have, I can tell that Apple and Google are going after Sony, Canon, Nikon, Fujifilm, Leica, Olympus and the L Mount coalition. Yet in 2018, the camera and what it is hasn’t fundamentally changed in many years. Yashica it trying to create something completely new: adding to the idea that a modular camera (and that’s what this is to a certain point) would be something that the world wants.

So what do I want in the next generation?

For a camera like that and without any major issues, I’d pay a few hundred bucks for and maybe even up to $1,000 for two lenses. For a first generation product, the Yashica Y35 isn’t awful if you accept it for what it is. But if you compare it to everything else out there, there are better options that are more sensical.

The Yashica Y35 wins two out of five stars.