The Nikon Z7 is the company’s attempt to outdo Sony in the mirrorless full frame space.

Upon initial thoughts, the Nikon Z7 has a whole lot going for it: except, you know, the single card slot and a card format that almost no photographer uses. But at the heart, there is a 45.7MP BSI full frame sensor capable of producing incredibly crisp images. On top of that, you can cram Nikon’s very simple DSLR style interface into the camera and their ISO range from 64-25,600; a win-win on many accounts when you consider it has weather sealing, the autofocus is actually very good (like Sony-level good), and there is built in image stabilization. Rightfully so, I can say with all certainty that the Nikon Z7 is going to be taking home a number of awards this year.

We got some hands on time with the new Nikon Z7 today and used it with the company’s 35mm f1.8 for the Z mount. Here’s what we think so far.

Editor’s Note: We used a prototype of the camera and the lenses. Taken from our comparison vs the Sony a7r III

As you look at the Nikon Z7, you can see that the company really wasn’t playing around with the size of that mount. With the contacts see in the image above, one can liken it to the mouth of a hungry shark waiting to devour a lens. Nom nom nom.

And on the sides of the mouth are custom buttons, some branding, the most stick lens release mount on a pre-production unit ever, and a big grip. The grip has an exposure dial too. Look at the top of the Nikon Z7 and what you’ll spot is a number of controls. The mode dial has an automatic mode. I’ll let that sink in as you and I both question why.

You’ll find the hot shoe, the fantastic top LCD dial, on/off switch, video record button, ISO button, and the exposure dials there too. Oh yeah, and there is the big viewfinder too. One of the engineers said that he was most proud of this, and I have to take my hat off to him. Nikon did a truly fantastic job here. Here on the side, you’ll find the XQD slot. To be clear, it’s a single XQD slot. I’m not sure why Nikon did this; but they did it! On the other side, the ports include a headphone jack, microphone jack, HDMI, USB, etc. You’re all set here for most photojournalistic video applications. When you look at the back of the Nikon Z7, you’ll see a number of buttons. There is the big display button that changes how the back LCD renders information. Then there is the joystick, info button, D pad, magnify, drive button, viewfinder, LCD screen, playback, etc. Again, it mostly feels very Nikon. However, this time around, the LCD is taking up more real estate. 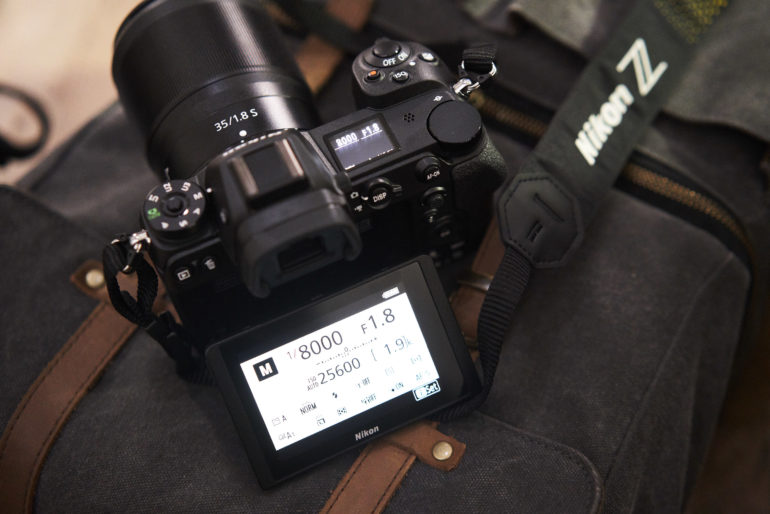 From images we saw during the presentation, the camera and lenses are able to survive while out in the wild, with rain hitting the units. This is just like the Nikon D850. Right here, the Nikon Z7 is winning out over the Sony.

In the hands, the Nikon Z7 feels interesting; it reminds me of a Sony camera except more like a brick, sturdier, and with some of Nikon’s more token interface. The grip feels nice, although personally I would’ve wanted something with less of a grip for a more low profile look. If anything, what I can surely say is this: take the Nikon D850, remove the mirror, make the thing smaller, and move the dials around and you’ve got the Nikon Z7.

When the Nikon Z7 was being used in the variety of lighting situations that I shot in, it was able to keep up with nearly every subject I shot. The only time where I saw a slowdown was when using a single focus point and continuous autofocus. To speed the focusing up, I needed to set the mode to a group. That’s fair and simple enough. But in most situations, the focusing was fast, accurate, and reliable. I can’t really fault it at all. However, I’d love for tracking focus to work with a single point.

For the landscape and portrait crowd that I see reaching for the Nikon Z7, you totally won’t have any issues except for the fact that with the single point, the focusing point on the screen is very small and sometimes hard to see due to a thin outline. The Nikon Z7 uses the Nikon D850’s menu system and therefore that of mostly any DSLR they have in the higher end of their spectrum. Combine this with the direct touch interface capabilities and you’re all set for a great experience. For the most part, it beats the hell out of Sony’s and has nowhere as convoluted a menu system. However, the Nikon Z7 isn’t all milk and honey. The position of the two control dials are odd. Sony and Canon have both wired my mind to wanted to go for the back dial for either aperture or ISO control; but here there is no back lower dial. There is only the back upper dial. So instead, you’ll need to change a parameter like the ISO by pressing the button and then rotating a dial. I guess that makes sense as I don’t change my ISO that often. But it’s an extra and arguably unneeded step. Nikon made a big stink about how revolutionary and fantastic the back thumb rest is and like no one had ever done it–but Fujifilm and Olympus arguably do it better.

Something else I found odd: I couldn’t set up the joystick to move from one image to the next. Instead you need to use the back D pad. That’s not terrible I guess, but I’ll need to rewire my mind for sure. If you’re a Nikon shooter, then this all sounds like you’re right at home. If you give me a bit of time, I can re-acclimate my mind to shooting with Nikon. Some odd things will never change though, like the direction of how you’re supposed to attach the lens.

We shot some TIFF files with the Nikon Z7 (yes, it shoots TIFFs). To be honest, I don’t think I did enough justice to this camera as the lighting in pretty much every situation was sub-par. When my review unit comes in, I’ll be able to do more justice to the camera. I still really need to spend more time with the new Nikon Z7. But so far I’m liking what it’s capable of. I can only see it being more specifically useful to landscape photographers for its durability. For studio photographers though, either choice will work fine. Sony’s autofocus is borrowing from the a9 and therefore is some of the best in the industry. Nikon is still no slouch except in certain situations as they pertain to tracking focus. But otherwise, it’s a solid camera.

Again though, I’ll save my final thoughts for later.