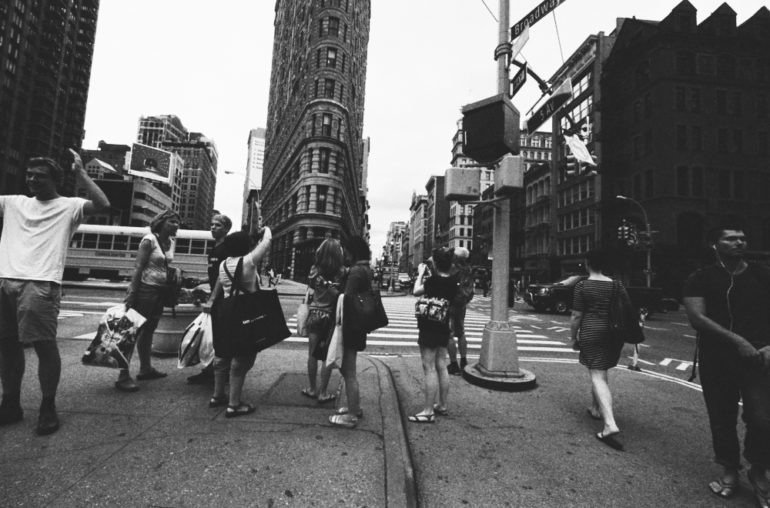 Ilford Delta 3200 is the highest ISO black and white film on the market.

Ilford Delta 3200 is a black and white film perfect for photographers shooting concerts, street photography at night, or anything that requires you to shoot in near darkness like a wedding reception. Like the other Delta films, it’s fairly contrasty but perhaps the least so of the bunch. Characterized by a strong grain in the images and a fair amount of sharpness, Ilford Delta 3200 deserves to be used with your fastest lenses and while using a camera that is handheld. You can surely use it any way you’d like, but in most other situations it would be more logical to use a slower ISO film. Instead, Ilford Delta 3200 should be brought along when you want to go out at night.

Our Ilford Delta 3200 was kindly developed by the folks over at Lomography.

Taken from the Ilford listing page

This panchromatic film is the perfect choice for any difficult available light photography conditions. If you’re a fan of Ilford Delta 3200, then you should know right off the bat that it’s probably not best to shoot it at 3200 ISO. Crazy, right? Sort of. That’s one of the first mistakes I made when working with the film until I was told to do otherwise. You’re essentially supposed to shoot with Ilford Delta 3200 at ISO 1600 and develop for ISO 3200. Oh, and you should have fast lenses on your camera. That means if you’re using it in medium format, then you’re most likely looking at the 645 format unless you have enough light with something like a Pentax 67 system or similar. Of course, medium format rangefinders mean you’ll get less shutter kickback as a result of a possibly slower aperture than what’s available for 35mm film.

Why is that the case? You’d think that since you hear the stories of black and white film and how it can be pushed or pulled for forever (the way Acros and Tri-X can) that you could do it with Delta 3200, right? Well, no. This is a panchromatic film–so think of it sort of like the difference between a negative film and a slide film. I tend to overexpose slide film a bit and try to get the metering to exactly where I want it to be. For that reason, I’d recommend Delta 3200 be used by photographers who have a great idea of what they want and with a camera system that has fantastic metering built in like the Olympus OM series and the Minolta a7 with the honeycomb metering system of some sort. A good idea is to use spot metering and exposure locking too. Ilford Delta 3200 can be used at any time; not just at night. You’re bound to go out at night, shoot a few frames and then be stuck with it in your camera for the next day when you go out. And that’s fine. You can use it during the day by stopping your lens down accordingly. If you’re shooting in the subways of big cities you’ll also have plenty of opportunities to use it there as well.

Ilford Delta 3200 tends to be a fairly high contrast film with big grain. Of course it’s going to have a lot of grain, it’s an ISO 3200 film! But for what it’s worth, it has less grain than the equivalent color negative film–which would be something like Superia 1600 or Natura 1600. The grain however isn’t displeasing at all. Instead, it lends itself well to being printed on matte paper. Further, the film is pretty sharp for an ISO 3200 film. Of course, that also depends on your lenses. Here’s what I’m talking about. The Hexar AF has a 35mm f2 lens that is very sharp and very beautiful. It’s arguably considered more or less a Leica copy in some circles. By all means though, it is an older lens. Can it still deliver sharp images? Absolutely! But modern day lens coatings are capable of helping lens elements resolve even more detail. Zeiss’ Milvus lenses are brand new and super sharp. In addition to that, their wide angle glass is very contrasty. As a result, you’ll get images with more contrast. This isn’t something that pertains to only Zeiss though, as modern Sigma glass will do the exact same thing. Do I like Ilford Delta 3200? You bet. But it’s probably not a film I’d use often. It’s best relegated to very dark scenes and I tend to not shoot in those. When I do, I shoot color. I’m also personally in love with Delta 400. Delta 400 also pushes VERY well to ISO 3200 with good results providing you’re giving the film a bit more light. I recommend everyone try it.