The Noob’s Guide to Choosing a Medium Format Film Camera

This guide is a guest blog post from photographer Marcin Wajda on choosing a medium format film camera based on just a few of the best offerings out there. Enjoy!

Disclaimer: You don’t have to agree with anything I put down here.

Disclaimer 2: I’m talking about interchangeable lens SLRs here. You can apply some of those principles to selecting a TLR or a rangefinder, but you’d probably be better off asking someone who uses those types of cameras.

I decided to write this, because the topic seems to be pretty popular these days. People ask “What camera?” and sadly, the answers are boiling down to “Get this one, because I use it and what’s good for me is definitely going to be good for you”, which, I think we can agree, is bullshit. 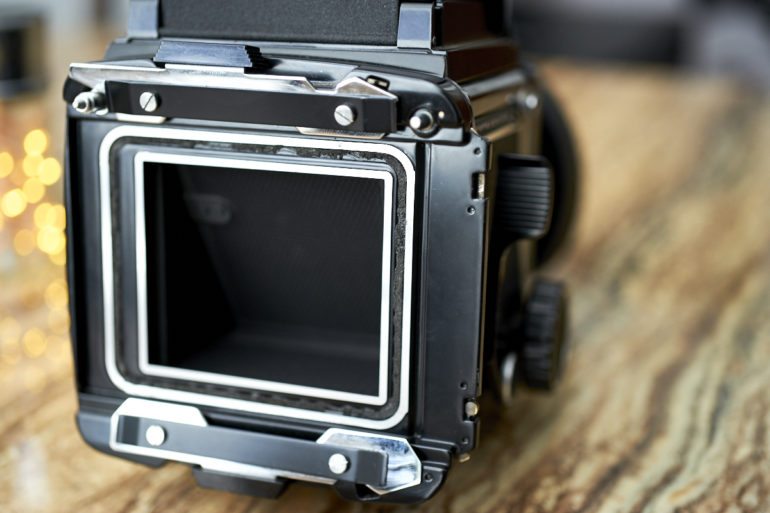 There are several choices you have to make when buying medium format camera. I’ll list them in order of impact on the way you are going to be shooting.

This is paramount. What kind of lighting are you going to be using in your photography? There are two options – available/constant lighting, or strobe/flash lighting.

The choice here is between cameras with focal plane shutters and cameras with leaf shutters. There are pros and cons to both of those. Focal plane shutter cameras usually means faster lenses, which allows for shallow DOF and better low light capabilities, and better maximum shutter speeds, up to 1/4000th of a second. What you sacrifice though is sync time. Focal plane cameras have atrociously long sync times, as long as 1/30th of a second with Pentax 67 for example. Leaf shutter usually gives you great sync speeds (1/500th of a second is the norm). But leaf shutters are small, and they normally cannot be used in fast lenses. So what you sacrifice for leaf shutter is maximum aperture, which is important if your primary reason of getting into medium format is shallow DOF. Portrait lenses with leaf shutter are usually around f4.0-f4.5 with a notable exception of Rolleiflex’s Schneider Kreuznach 180 2.8, which is possibly the biggest aperture leaf shutter medium format portrait focal length prime. It’s still limited to 1/500th of a second maximum shutter speed though, which means problems shooting in daylight wide open. This is enough to get a shallow-ish DOF, but not enough to really show what medium format is about. There are cameras that work with both types of shutter, like Hasselblad 200 series for example. Usually they’re expensive, but if versatility is your thing, you might want to give them a look.

Most of the camera systems have pretty decent lineups, but before you buy better be sure that the lens you want for what you’re going to be shooting’ is readily available and within your price range. Pay not much heed to “the lenses for this system are super sharp and awesome” bullshit. Most medium format lenses are more than sharp enough, due to the size of the film (in case you didn’t know, the bigger the film, the less important is the super duper quality of the lenses for final sharpness). Yes, there are better and worse lenses, but even shabbiest Russian lenses are capable of great results, so no worries here. When shooting handheld, what you want to take into consideration is the weight and size, especially if you want to lug the camera around for longer periods of time, and ergonomics, which is basically how easy the camera is to hold and operate at the same time. Smaller usually means better here, therefore you might want to take a look at 645 or 6×6 cameras.

When shooting from a tripod, weight and size are largely irrelevant (provided you have tripod sturdy enough). What gets more important is workflow – easy access to things like remote port, sync port or hot shoe if you’re shooting with flash, good implementation of mirror lockup (for example, Mamiya RB67 has the most bizarre and quirky MLU I’ve ever seen on any camera), big knobs for operating camera’s functions etc.

Each camera has its own set of problems you will encounter sooner or later. Keep in mind most of the gear on the market has been heavily used, usually by a pro photographer. And some cameras, mostly East German and Russian, can be problematic right out of the factory that made them. But even the best gear wears down in the end. So, when you are buying a camera that’s twice your age, you might want to test it first. And before you cough the dough, read up on the Internet about typical problems with the camera you want to buy and test for those problems first. You might want to check up on camera services near your place, because their maker won’t service most of those cameras anymore. It’s good if the camera you are buying was serviced recently, although sadly, some sellers will lie about it.

I’m not putting a number before this point, because this particular criterion is very personal. Price might be no object for some, paramount for others. Bear in mind that usually you get what you pay for, so you might expect more expensive cameras to be better built and better handling than cheap ones (there are exceptions though, especially if the camera you want to buy has a cult following). Again, “you get what you pay for” rule is particularly true of Russian gear.

To give you some idea about how to judge a camera by the above points, take a look at the lead photo (this isn’t by any means all of medium format cameras I’ve owned or used, those are just the ones I had at hand at the time). Those are just examples on using the info that’s readily available on the web to get an idea whether a particular model suits your needs.

There are five medium format cameras there, and from left to right they go like this: This is a focal plane camera, with atrocious sync time (about 1/25th of a second), so mostly useful for available light shooting.
The lens lineup is decent, with most everything you might want to use, and one lens that shines – Sonnar 180 2.8. There is only one other medium format lens of this particular focal length and speed, Schneider-Kreuznach Tele-Xenar 180mm/f2.8, way more expensive, so if portrait is your thing and you’re thin on budget, you might want to look no further.

It handles well, like a slightly bigger SLR with simple and readily available controls. It lacks MLU, and the mirror packs quite a slap, so short exposure times preferable.

It has a lot of problems. Despite being built like a brick, it breaks easily. It is prone to overlapping frames, so be careful. You also have to be careful when winding it, because otherwise you might damage the mechanism. It needs CLA from time to time. You might want to check for front/back focus, especially if the camera was not used a lot, because straight from the factory they were usually off.

It is very cheap, so if price is the most important factor it might be what you’re looking for.

On the 25th, Chris will publish his review of this beautiful camera.

Perfect lens lineup, with lenses of every focal length and great quality, albeit slow. Handles well, has well implemented MLU, no hot shoe. Can easily be shot handheld and from tripod. It has some quirks, so read the manual. Nothing particularly annoying but gets some use to, especially if you’ve never handled one before.

The main problem is the light seal in the back, which has to be replaced from time to time. It’s easy to do, the seal is cheap so no biggie. Mostly the camera just goes forever.

Price for camera is reasonable. The lenses can be expensive though, so be sure you can afford what you need.

Leaf shutter, good sync time. Has fast-ish lenses though (f3.2) so it kind of mixes the best of both worlds, but with the fastest shutter speed of 1/400 it’s hard to utilize those fast-ish lenses in daylight.

Lens lineup is very good, with lots to choose from, and the unique ability to make every lens into tilt/shift.
It’s definitely made for tripod work, though some people have been shooting it handheld. I’d not advise that though, unless you are really strong of biceps, as it’s a heavy and unwieldy piece of gear. On tripod however, it handles perfectly, with every control readily available, big knobs, big buttons.

There are three versions of this camera (four if you count the “S” version, but you don’t want to count it. It’s a waste of money). There are two main problems. One is the battery. You need to be sure that you buy one with working battery, or you know how to get a replacement. This can be done in many ways and the Internet will help you. The other problem is, this camera is unserviceable. If it breaks, it stays broken. Fuji doesn’t service them, and good luck finding an independent service that will take it on.

Price is reasonable. Not particularly cheap, but not very expensive either, both camera and lenses.

The lineup could be better, so check if there’s everything you need. Lenses are very good, sharp and well corrected, but did I mention they’re SLOW? They are. Handles horribly. Very big and heavy (do not be deceived by the photo where it stands next to the GX680 – it’s actually heavier, because it’s mostly metal, whereas Fuji is plastic), definitely for tripod, though of course there will be many who’ll tell you otherwise. Even on tripod it’s not a straightforward operation camera. Quirky MLU, separate film advance and shutter cocking, the need for manual bellow extension exposure compensation make this camera a bitch to operate. You have to really get used to it.

The only problem I ever encountered (aside from operator errors stemming from complicated workflow) was that the film back developed a light leak. You might want to check it before you buy.

Price is very reasonable. Both camera and lenses can be had very cheap, so if price is a factor, and you can live with the quirks, this is serious contender.

Check out our review of the Mamiya RB 67

The Mamiya 645AFD is a Focal plane shutter camera with semi usable sync speed of 1/125th of a second. It might be used in a studio in a pinch I guess, though mostly it’s an outdoor camera, with a respectable 1/4000th of a second maximum shutter speed.

Lens lineup is pretty complete, though it doesn’t have any outstanding piece of glass. Handles very well. Imagine a modern SLR, only bigger. Has lots of controls, the PASM is there too. AF is primitive and not very reliable. Beautiful viewfinder, one of the best I’ve used. Might as well want to utilize this and shoot in manual focus mode.

Biggest problem of this camera is that it’s very failure prone. I’ve had three; all of them developed some problems, two with shutter, and one with AF drive.

It’s expensive for what it offers. There are cheaper alternatives, with more flexibility and durability at the price.

If you want to get a particular camera, and don’t know how to determine if it’s a good choice for your needs, scour the web for the following info:

This is a guest blog post by Marcin Wajda. It and the lead image here are being used with permission. Be sure to also follow him on Facebook!