There has been lots of talk about Sigma’s new 50mm f1.4 Art lens. Early reports have shown that it is about on par with Zeiss’s 55mm f1.4 Otus lens–and Sony themselves have created one heck of a 50mm f1.4 lens. Based on mostly the same formula (at least on the outside) as the company’s very successful 35mm f1.4 lens, it only makes sense that there is a ton of hype about this lens.

We got to play with a pre-production unit recently–and it seems every bit as beautiful as it seems. If you’ve been a fan of Sigma’s new designs, then get ready to be really hyped. The 50mm f1.4 Art lens looks as spectacular as the 35mm f1.4–plus it feels like Hasselblad would have made it. The exterior is comprised of metal sans for a couple of very key areas. When you first look at the lens, you’ll notice that it is dominated by the large focusing ring. This ring is positioned near the front of the lens and just behind it is the depth of field and distance scale. For what it’s worth, I really wish that Sigma would have made the depth of field scale actually useful. 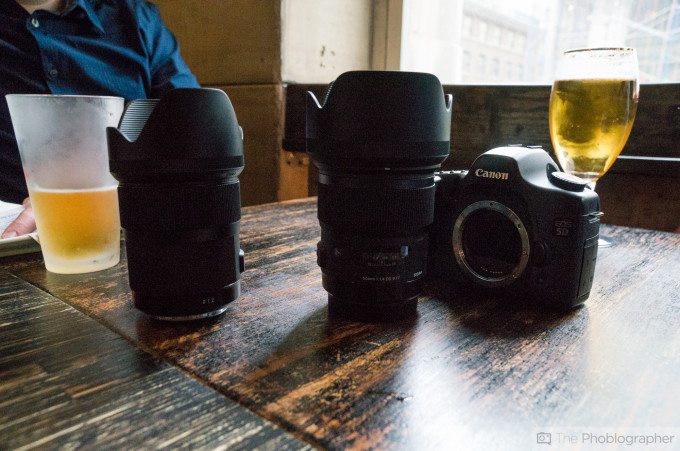 We worked with a pre-production model of the lens and it seems to focus about as fast the Sigma’s 35mm f1.4 lens or at least a tad slower. This isn’t bad at all for the DSLR world and considering how hefty this lens is. Imagine Sigma’s 35mm f1.4 and then make it beefier: that’s what this new 50mm optic is like. If you’re the type that takes an extra healthy portion of beef before you sit down to stuff your face to your heart’s content, then this could be the lens for you. If you’re more of a lightweight, then Sigma’s previous lens is a better option.

This lens doesn’t have weather sealing–but that doesn’t make us think any less of its build.

We couldn’t put a card in the camera to examine the image quality unfortunately due to the fact that we worked with a pre-production model. However, early tests are stating that this lens is going after the Zeiss 55mm f1.4 Otus.

We’re going to need to run this one through our normal field testing in order to see how it performs, but we’re very positive that Sigma is creating another masterpiece with this lens.