We didn’t think that this would ever happen, but it was really just bound to. Sony is announcing their brand new A3000 DSLR–except that it isn’t a DSLR at all. Instead, this is the first Alpha camera that is meant to take NEX lenses. And as a result, the A3000 doesn’t have a mirror–but there is an electronic viewfinder. This camera is being targeted at the entry level consumer who is looking to step up to an SLR style camera. And as a result, they’re retailing this camera for a $399 price point when it drops in September.

We spent some personal time with it recently; and judging from our 10 minutes with the camera, we’re not sure anyone would ever want to put it in manual mode.

– 100 percent coverage in the viewfinder

– Can take A mount lenses with an adapter Sony’s brand new A3000 is their smallest and lightest DSLR that they’ve ever put out–except that it isn’t a DSLR. It is a mirrorless camera being marketed into their Alpha line of cameras and that has the look and feel of a DSLR. Sony is trying to target the user that wants the look of a professional but wants a small option. And they’re really hitting home with this camera as it barely has any controls. The top of the Sony A3000 won’t look serious to any of the more experienced users, but the total amateur will think that this is one bad ass picture snapper. They’ll notice the finder/LCD button, mode dial, playback button, on/off switch, shutter release and hot shoe.

Plus there is that grip. Sony designed this camera for the person that wants to use it like a point and shoot–so we’re not even sure that the grip will be used often. The side of the A3000 features a couple of ports such as HDMI and USB. Near the top, this is also where the user will find the pop-up flash. The back of the A3000 features an LCD screen, viewfinder, video record button, display button, ISO change button, drive button, and exposure compensation. In the center is a dial for changing settings.

During our press meeting, I discussed the LCD screen’s quality with a couple of other journalists and we all agreed that we weren’t so impressed with the quality. We’re not going to sugar coat this: it feels a tad cheaper than the Canon Rebel SL1. It is lightweight and feels even less substantial than the A37 that we reviewed previously.

But for the price point, what can you really expect? To get through the camera’s interface, Sony has basically fused the old Alpha menus with the new NEX menus. One can liken it more to the NEX 6 in some ways. 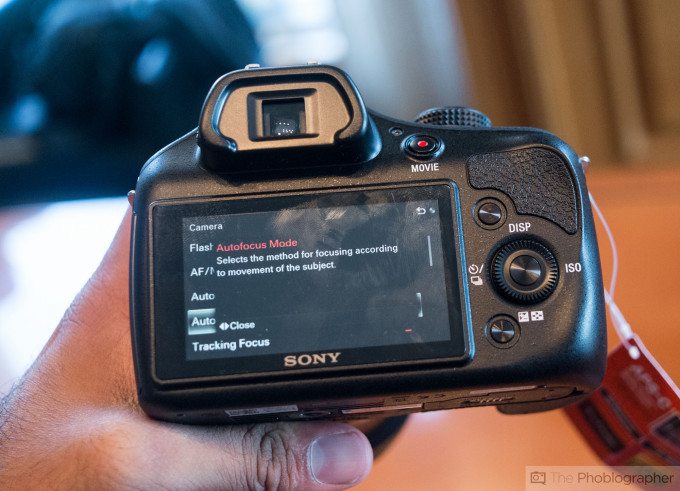 In real life use, we actually see this being simpler for the entry level consumer than the older Alpha menus–but we have to admit that it will still take longer for anyone to learn the camera’s interface than others. Once the interface is learned though, it will make a load of sense.

For what it’s worth though, we’re not sure anyone that is actually going to buy this camera will spend loads of time in the menus.

We were handling a pre-production unit, but the focusing on this camera has to be the slowest amongst any of the mirrorless cameras from Sony that we’ve ever held. It felt even a bit slower than an offering from Fujifilm. And with that in mind, it didn’t feel like a Sony at all. However, we’re willing to blame it on the fact that we handled a prototype and that the lenses we had on hand were also prototypes. Sony’s new Zeiss 18-105mm f4 G lens is meant for the NEX camera bodies and is a powerzoom lens with all internal focusing and zooming. The fact that it is a constant F4 is a real accomplishment–but Canon and Nikon have also had close equivalents for a while. This lens didn’t focus so quickly to us, but it could have been a number of factors–we’re most likely to blame it on the camera as the higher end NEX cameras are some true speed demons. Then there is their brand new 16-70mm f4 Zeiss lens as well. This is the company’s new wide to normal zoom lens with a constant F4 aperture range. It is an external zooming lens so it will surely extend out when in use. This lens focused a bit faster for us on the A3000–but we’re not sure that one would need such fast focusing anyway for this, at least at the wider end.

We couldn’t put an SD card into this camera because we held a pre-production model. The image quality isn’t final and we’re not very sure that the firmware was either.

However, when chimping the LCD screen, we didn’t think that the screen could possibly do what Sony’s sensors are capable of any justice. We had to zoom into the screen a lot to get the true feeling of what this sensor is capable of. And if the image quality that we saw on the back of the LCD screen is anywhere as good in the final versions, then consumers will be pleasantly surprised.

This is the camera that threw us off a bit. Sony decided to get rid of the mirror altogether and embrace their mirrorless cameras in a DSLR form factor. We can probably call this a Panasonic G6 competitor in some ways, but the G6 is also better in many ways. The A3000 will surely sell well due to the low price, but we’re not sure how many folks will be happy about moving up to an NEX camera model later on from a DSLR form factor body.

We’re really going to need to see on this one.