Five Fixed-Lens Cameras for the Prothusiast The fixed-lens compact camera with a larger-than-average sensor is the prothusiast’s most valued companion. Why? Because it promises excellent image quality in a small and light package. Often equipped with lenses between 28 and 35mm, these cameras lend themselves to street photography and journalistic styles. Due to the success and popularity of this camera type, there is now a significant number of models on the market, which can make it difficult to decide which one to get. In order to make things easier for you, here are five fixed-lens compacts that The Phoblographer recommends. Let’s start with the camera that has the smallest sensor–though small in this case is relative. In comparison to other compact cameras, the RX100’s 1″ sensor can be considered enormous. Even though it packs 20 megapixels, the size of each pixel is still larger than that of your average point-and-shoot. In addition to the large sensor, the RX100 also features an exceptionally bright lens, starting at f1.8, and a versatile focal length range of 29-105mm. This does not only in theory mean excellent image quality–in fact, in our review we found that for a compact, the RX100’s image quality is exceptional. Both in terms of detail rendition and high ISO, where it fared almost as well if not better than some entry-level DSLRs. Add to all that an integrated HDR mode, Full HD video, good manual controls, a large and bright screen and good battery life, and you have a compact camera that even the most demanding of users will be happy to use on a daily basis. At photokina 2012, Fujifilm surprised the world by presenting an entirely unexpected camera: the X100. What made it so great was the fact that it packed an excellent 35mm-equivalent f2 lens and a large APS-C sensor (the size you typically get in a DSLR) into a body that resembles a classic fixed-lens rangefinder camera–not only by its looks, but also by its control layout. The biggest selling point of the X100 though was its hybrid viewfinder, that could switch between optical view with a translucent LCD overlay, and electronic view with a more exact preview. It was a great success, with both amateurs and professionals.

The X100s builds upon the X100’s winner concept, and ups the ante by radically improving the autofocus and exchanging the regular CMOS sensor by Fuji’s own X-Trans sensor which they had previously packed in their X-Pro 1. What makes the X100s so great is its mix of excellent image quality, a bright and versatile 35mm f2 (equivalent) lens and the great control layout with a manual aperture ring, manual focus ring and manual shutter speed dial. And just as rangefinder cameras back in the day, the X100s’s shutter is virtually silent, making it the perfect tool for unobtrusive street and journalistic style photography. Just like the Fujifilm X100s, the Nikon Coolpix A packs a large APS-C sensor and a fixed-focal-length lens into a compact body. Unlike the X100s, though, the Coolpix A’s lens comes with a focal length of 28mm-equivalent, which is considerably wider. Also unlike the X100s, the Coolpix A does not sport an integrated viewfinder. The Coolpix A user can decide to frame his pictures via the 921k-pixel 3″ rear display, or via an accessory viewfinder that can be mounted to the flash hot shoe. The Coolpix A’s control layout is less rangefinder-like also, resembling that of a typical point-and-shoot or Nikon’s entry-level DSLRs with its large mode dial on top and some direct-access buttons flanking the rear display. On the upside, it features a manual focusing ring around the lens and a customizable adjustment dial, which can be used for example to control the shutter speed or set the aperture. Thanks to its very sturdy body, its unobtrusiveness, its excellent image quality, and its well-sorted control layout, it may just fit the bill for many street photographers and enthusiasts.

You can find our first impressions of the Nikon Coolpix A here. It can be purchased from B&H Photo for US-$ 1,096.95 in either black or silver. The Ricoh GR was announced around the same time as the Coolpix A, although rumors predicted its advent long before word came about the Coolpix A. Coincidentally, the Ricoh GR–which is the spiritual successor to both Ricoh’s analog GR series, as well as its digital GRD series–is strikingly similar to the Nikon. Following the tradition of the GR and GRD series, the new GR sports a 28mm-equivalent f2.8 lens, which lends itself at street photography and journalistic style–which is what the old analog GR cameras were renowned for. Also perfectly in the tradition of the GR series is the GR’s body shape, closely resembling that of the old GR1. Unlike its predecessors, the GR sports a large APS-C sensor with 16 megapixels, which lacks a low-pass filter for better detail rendition. The control layout is spartan compared to the X100s and Coolpix A, but offers everything you need: a mode dial on top, an adjustment dial on the back, an AF mode switch and some more direct access buttons. Just like the Coolpix A, the GR lacks a viewfinder, but can be fitted with an external one (not electronic, though.) And just like the Coolpix A, its body is small, solid and unobtrusive.

You can find our first impressions of the Ricoh GR here. It can be purchased from B&H Photo for US-$ 796.95. 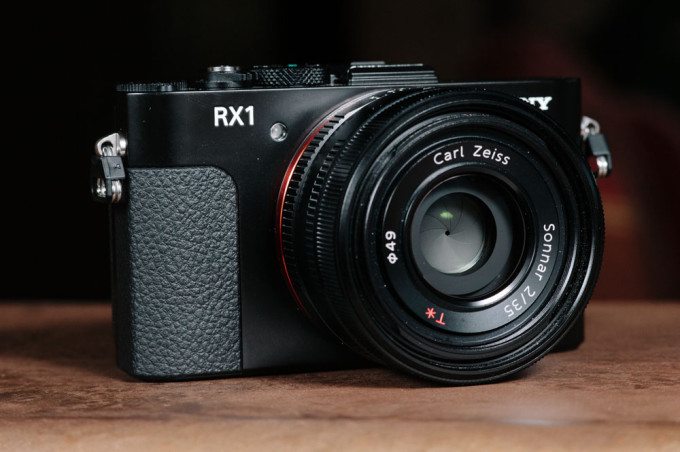 And another Sony in this list. The reason why it comes last is that we started with the smallest (both in terms of sensor and body size) and cheapest camera and made our way up to the top. Well, the RX1 deserves to come last in this order, because it tops everything we’ve seen so far. The RX1 is the first-ever fixed-lens compact digital camera to sport a 35mm full-frame lens in a body the size of a point-and-shoot. The sensor–which is identical to that in Sony’s A99 SLT camera–is paired with a Carl Zeiss-branded 35mm f2 Sonnar lens, together with which it was designed to be a perfect match. The lens sports a manual focus and manual aperture ring, and the body–which is incredibly small for a full-frame digital–comes with a manual exposure correction dial and adjustment dial on the rear, as well as a standard PASM mode plus your standard control buttons on the rear. On top of all that, the RX1 is equipped to take Sony’s brilliant electronic viewfinder, which sports an OLED display resolving over 2.3 million dots. All this goodness comes at a price, though, and so the RX1 is more that twice as expensive as the Fujifilm X100s. But then again, so far, the RX1 is the absolute overlord of fixed-lens digital compacts, and is unrivaled in specifications and image quality. We could end our list here, but there is one camera–or more specific, one series of cameras–that we don’t want to hold back from you: Sigma’s DP-series. They doesn’t really qualify as ‘prothusiast’ cameras since they’re nowhere as snappy and versatile as the cameras we’ve mentioned here. But they still offer some amazing specs, and as a team may just be everything you ever need. The DP-series consists of the DP1, DP2 and DP3 Merrill cameras, which share the same sensor and body, but differ regarding their lenses. Each camera sports an f2.8 lens, with the DP1’s being a 28mm-equivalent, the DP2’s being 45mm-equivalent and the DP3’s being 75mm-equivalent. So you see why they’re a perfect team: three focal lengths covering wide-angle, normal and portrait/tele, but the same user interface and image quality.

A propos image quality: the DP series sports Sigma’s new 46 megapixel Foveon sensor, which delivers images of outstanding sharpness, clarity and color fidelity. It’s the same sensor that’s being used in the SD1 DSLR, and unlike a regular CMOS or CCD sensor that has a color filter on top and only records one color for each individual pixel, the Foveon sensor record all three basic colors–red, green and blue–at each physical pixel location. That translates into unmatched detail and color rendition, and makes Sigma’s cameras the ideal tool for portrait, fashion and studio photographers in general.

On the downside, the cameras don’t sport the quickest AF, have a relatively reduced control layout and don’t deliver the best image quality at higher ISO settings. But what they lack in these departments, they make up for manifold by the gorgeous images they output in good light. And for the more deliberate photographer that does not require fast AF or clean high ISO files, they may just be the perfect tool.