Today, Helmut launched as a free download in the Android store in its Beta production phase. Helmut is a new app that is touted as being a great way to scan your old film images and has already won an award. To take the best advantage of this app, it is highly recommended that one uses a lightbox. However, there have been DIY hacks involving Macro lenses and flashes before. For this quick test, we used an iPad Mini and a MacBook Pro Retina display. Firstly, Helmut lets you scan an image using your cameraphone. Many phones have very good sensors these days, but what is still lacking in many ways is their plastic lenses. When you boot up the app, it gives you the options of a BW negative, Color Negative or Color Positive.

I chose a very heartbreaking roll of Kodak Ektachrome for this test–so I chose color positive. It also reminded me of just how much I really miss this film. Since I no longer have a lightbox available, I used an iPad mini which has a relatively tight pixel density. I turned the brightness all the way up, flattened the image I wanted to use and shot it with the app. Once you have the image selected, you need to crop it. It maintins its proportions just like one would with Instagram–so we’re not sure if it might be best to use the app with 120 film. However, it was quite simple to use with 35mm. 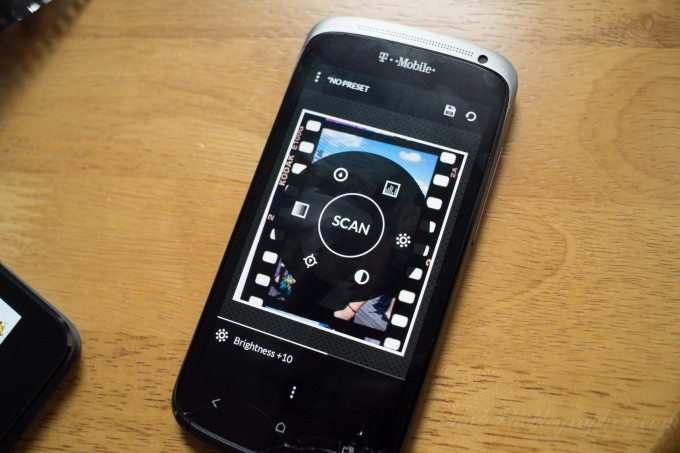 If you pinch the screen and move outward, it will open up another menu for you to make other adjustments. And when you’re done, you press the scan button. Once the image is, “scanned” you can share it and it will be saved to a certain spot on your phone. However, I couldn’t find it in the normal Android gallery. So I needed to send my image to Dropbox. The app also doesn’t keep a recollection of previous scans you might have done–or at least allow easy access to them.

That’s bound to change though as this is the beta product only. Here’s one scan that I did. To be really honest, it’s pretty damned good considering that the iPad isn’t a proper lightbox. The image is sharp and looks like an awesome scan–but I really wish that it didn’t have the sprockets. However, I needed to keep them in the scan.

To get the most from this app, you’ll need a proper lightbox. But from what we’ve seen from the beta test, it is really quite good and totally deserving of the award. We really wish that there were an easier way to get to your images and more integration with other apps. The creator is for sure on to something though, and he deserves nothing more than an applause.