If Seat Belts Save Lives, the Lens Loop Saves…Your Camera? 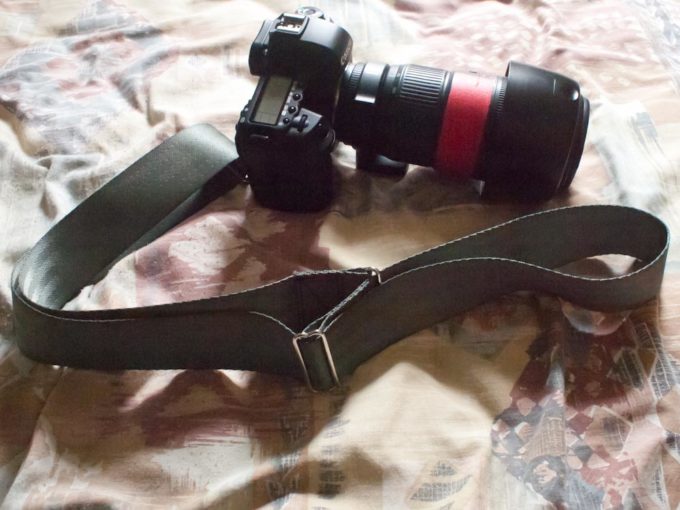 Camera straps are a much lusted item of many photographers. When Vadim Gordin, the creator of the Lens Loop contacted me about trying out his new Lens Loop camera strap, I was very intrigued yet confused at the same time. The project, which is in its KickStarter stages, hopes to become a full fledged product to be launched in stores across the nation. So does a seat belt really stand a chance as being your new camera strap?

The Lens Loop is made out of recycled seat belts and is entirely constructed right here on American soil. The strap takes up around two inches of surface area, so it evenly distributes the weight across your chest when in use. Vadim notes that this makes the strap much more comfortable to use vs the Black Rapid R-Strap and Sun Sniper (both the R-strap and Sun Sniper were reviewed on this site very positively). The idea is that since the camera’s weight is pulling the strap down and more into your skin/body, it is concentrating all that pressure into a thinner area. In contrast, the Lens Loop is spreading it out a bit more for extra comfort. The strap connects to your camera via the clamp (seen above) that connects to the equivalent of an industrial grade split ring (think of the ring on your key chain, but tougher) and a special screw that affixes to your camera’s tripod socket. Something that I was a bit wary of was the camera swinging around and perhaps detaching from the clamp. Thankfully, the clamp is actually very pressurized when in the position shown above. Then there is the use of quick access to your camera. A minor design aesthetic that the Lens Loop incorporates is the fact that the ring that connects to the strap itself is smooth on the inside—therefore making bringing the camera up to your face much simpler and smoother. Consequently, it may also mean that your camera may swing around a bit more as it travels along the strap’s length.

I took the Lens Loop and attached it to my Canon 5D Mk II and 24-105mm F4 L IS. For a thorough but quick test, my route began at one end of New York City’s High Line park, continued until the end, walked eastwards three avenues and then back to the street where the High Line started (yes, in a complete circle.) For those of you that have never been to New York, the High Line spans almost 30 city blocks; so the math looks like:

Along the route, I often tugged at the camera and the strap to get a real feel for it. The more I tugged, the greater my appreciation grew for the product. At no time did I once feel like the camera would fall, swing out of control, or that the strap would cause discomfort. In fact, I was thoroughly surprised by how comfortable it felt without the extra padding. The larger surface area meant that the strap didn’t dig too much into my button-down shirt. Make no mistake though, it wasn’t all perfect. I sweat a lot—and when I took it off there was a two inch by six inch imprint of sweat across my chest where the Lens Loop was.

Another concern of mine was how the strap would fare if I wanted to wrap it around my wrist. To take the best advantage of this, you’ll need to make the strap shorter by adjusting it accordingly. Then, it actually becomes very comfortable to hold and, because of its design, also tends to cover up most of your hand.

My last concern was a little bit more obvious: the looks. Back when I was a full-time professional shooter, I often strived to look professional. I have to admit that wearing a seat belt while walking around felt a bit weird; but thankfully I didn’t get any weird looks from people. As a constructive criticism, I’d advise that that some extra branding should be on the strap for a more professional but subtle look.

However, Vadim seems to be targeting this product at enthusiasts, hobbyists, and consumers vs professionals. That crowd may not care too much about looks, but they will surely appreciate the comfort that the Lens Loop delivers. The wide variety of colors will fly very well with the younger crowd.

Once again though, the strap is specialized. I wouldn’t use it as my primary strap but instead I would keep it on my 7D with a telephoto lens. Additionally, I believe that for the product to really take off with Micro Four Thirds users, it may need to be thinner.

As it stands, the Lens Loop is trying to take a common idea and put a different and more creative spin on it. And for that, it should be praised as a great idea that follows through with commendable execution.