New Tools Clear the Haze in This Photo Editor: Capture One 21 Review 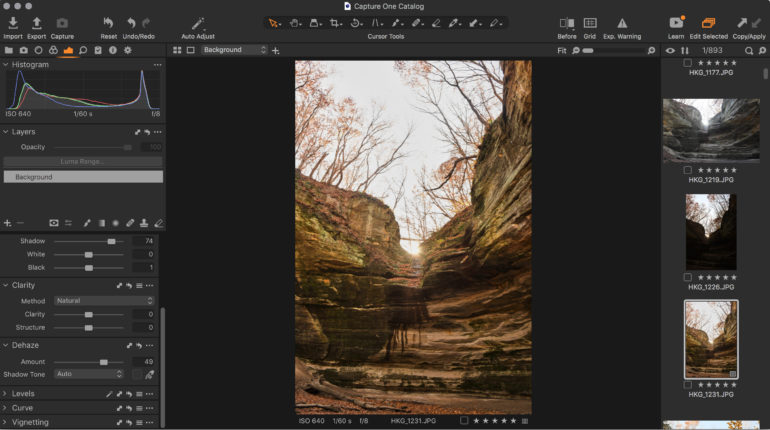 While most photo editing software offers a list of similar features, the same tool’s performance may vary across the board. Capture One has consistently delivered more flexibility with RAW photo editing than the competition. It starts with better noise reduction algorithms to squeeze out a bit more shadow recovery, and runs the gamut. But they’re not done yet. Announced today, Capture One 21 adds several new features topped by a customizable Dehaze tool and Speed Edits.

While Dehaze isn’t something Adobe hasn’t thought of before, Capture One isn’t just copying the competition. The company makes the tool their own with custom shadow tones. With Speed Edits, Capture One makes keyboard shortcuts actually make sense for slider-based editing. The update also addresses one of our previous complaints by speeding up and simplifying the import process and enhancing the learning tools. But, are those changes enough? How does Capture One 21 compare to Lightroom?

I tested a beta version of Capture One 21 to find out. The version tested is basically the closest to finalized you can get. I’m a Capture One newbie — I’ve only used the previous version for about a month. Throughout the testing, I compared the features to the old version as well as the industry standard and the editor I am most familiar with, Lightroom.

Taken directly from Capture One:

The biggest new tool coming to the December 2020 release is a Dehaze slider. Like Lightroom’s tool by the same name, the Dehaze slider adds contrast, polarization, and clarity back into a flat image. The tool is helpful for backlit images, as well as fog and, of course, haze. Dehaze can also add a little more blue into the skies and fix the lack of contrast created by lens flare.

But while the slider has the same function as Lightroom’s, Capture One 21 has a second control — the shadow tone. Sometimes, using the slider creates unnatural tones in the darker areas of the image. Lightroom has no way to control this. Capture One 21 does. Using manual shadow tone simply requires clicking on a darker area of the image with an eyedropper tool to correct any odd color tints. I edited a golden hour backlit photo in both programs, and Lightroom left a very slight green tint in the background. Capture One 21 was a bit better even on auto, but excellent once adjusted for manual shadow tones.

The update also adds ProStandard camera profiles. Available for only a limited number of cameras at launch, more support is coming. But at the moment only Canon, Nikon, Sony, Phase One, and Leica cameras are getting support. Sorry, Fuji! Capture One claims that this RAW color profile creates more natural color renderings. Deeper support is coming later. When comparing the default profile to ProStandard, the difference was very subtle but more true to life. In one of the photos that I worked on, ProStandard created more accurate shadow tones. This profile also removed a slight red tint to the brown dead leaves in the background. I didn’t like that skin tones looked less red, but slightly more green.

Dehaze, ProStandard, and Speed Edits — which I’ll talk about next — are some of the biggest new features to Capture One 21. But of course, those new features build on the previously available tools that many photographers know and love. We’ve applauded the photo editor’s features in the past, so I won’t re-invent the wheel. But, for newcomers to Capture One, these are some of the biggest stand-outs that still carry over:

One of the things that I don’t care for in Capture One is that you have to fish through different tabs to find the right adjustment instead of scrolling down a single toolbar. While Capture One’s interface remains largely unchanged, the editing program has introduced a way to edit without digging through tabs to find a specific slider — the Speed Edit.

Speed Edit is a rather genius way to turn a slider-based adjustment into a keyboard shortcut. When you tap on a shortcut, sliding two fingers up or down on the trackpad will adjust that slider’s value. The tools can also be used with a mouse wheel or, alternately, the arrow keys. The slider pops up at the bottom of the screen so that you can see the value as you edit. Capture One 21 is preloaded with Speed Edit shortcuts already set, but they can easily be customized.

Using the new Speed Edit feature feels almost like editing from a Loupedeck or similar editing console, but without actually spending money on one. The exception is that there’s not as many Speed Edit shortcuts as there is on a Loupedeck. Color grading, for example, isn’t included. But, for making adjustments to the exposure, highlights, shadows, sharpness, white balance, and more, Speed Edits is an excellent addition to the program.

The best part about Speed Edits? You can select multiple images at once and Speed Edit all of them together. This is a great tool for shots that were taken under the same settings and conditions and will need similar adjustments to all of them. After doing a speed edit, you can easily go in and individually fine-tune. (The option to copy and paste edits to other images is still intact and another way to edit multiple images.)

The latest version also adds a few new import features that help simplify the process just a bit. Images can now be picked individually with keyboard shortcuts – P for Pick, X for Unpick, spacebar to toggle between pick/unpick. The import window is also larger, and you can import images from multiple photos at the same time.

For photographers — like myself — relatively new to the Capture One Family, Capture One 21 brings more tools and tips into the app itself. The learn button is now easy to find at the top, with access to in-app tutorials and a link to find more on the web. Hovering over a tool will now bring a pop-up that explains what the tool is. This is an excellent addition because the icons are not always self-explanatory.

Capture One 21 also has a few incremental performance updates, including faster opening, importing, and browsing. Previews loaded quickly, including import previews, and both seemed to be a little faster than Lightroom’s preview loading. Importing about 300 images on my machine took about 13 minutes.

Those new additions build on what Capture One has had in place for years. As a photographer accustomed to Lightroom, Capture One’s interface takes some time to learn, but once you find out where the tools are, the ease of use becomes similar to other editors. The trick is finding out where everything is. Unlike Lightroom, Capture One’s toolbar is organized into tabs, so you have to do a bit of digging to find all of the controls. While I love the ability to customize the workspace, it is a bit cluttered.

We’ve recommended Capture One in the past for several reasons. The tools like noise reduction and shadow recovery that tend to do a little better than the competition. The option to edit with layers is also fantastic, and the performance is good. Capture One 21 has a similar list of tools compared to other photo editors, especially with the Dehaze tool. It’s an advanced program that mixes the editing and organizing of Lightroom with the layers of Photoshop.

That makes Capture One a good option for pro photographers as well as enthusiasts. However, the cluttered user interface may feel a bit more daunting unless you clean it up. So beginners should be computer savvy and willing to spend some time in tutorials to get started with the program. Capture One 21 is one of the best photo editors available, but it is not as easy to learn. Photographers migrating to the program should expect to spend some time in the tutorials or taking an online class.

Capture One is an excellent, fully-featured photo editor — and version 21 just makes it even better. Competitors already have a Dehaze tool. But, unlike Lightroom, Capture One’s Dehaze adds the option to customize the results. Speed Edits make keyboard shortcuts much more useful and editing even more tactile. The enhanced learning tools and ProStandard camera profiles are not as earth-shattering but are still welcome changes.

Those updates join the features that I already love about the photo editor, including excellent noise reduction algorithms, better highlight and shadow recovery, and layer masking. While the improvements answer some earlier complaints — like improving the import process — there are still a few left. The user interface, while customizable, is cluttered and a bit daunting to learn. I also missed Lightroom’s cataloging system, with the ability to both star and flag.

Capture One 21 is available with a $180 annual subscription or $24 monthly. Or, photographers can buy the program outright for a $299 license. Current licensed users can upgrade for $159, which may be a bit steep to get Dehaze and Speed Edits, however excellent they are.

For its excellent tools, better than average results, and decent performance, I’m giving Capture One 21 four out of five stars. It’s an excellent photo editor with all the right tools, but just a bit steeper learning curve.