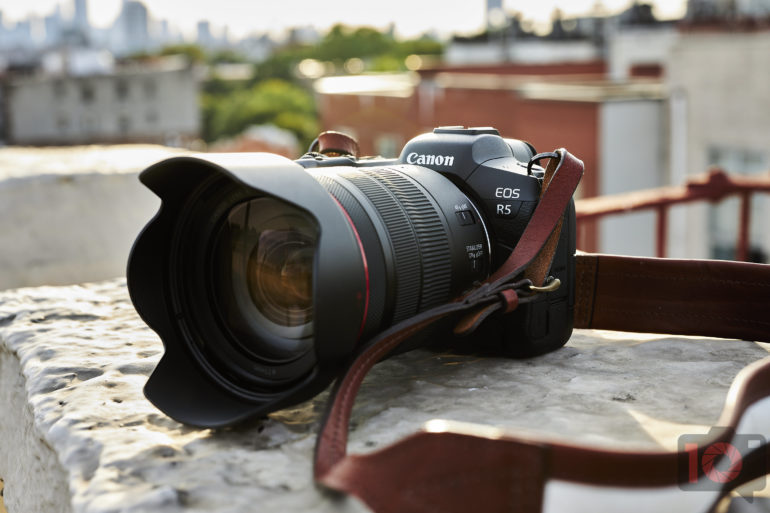 The Canon EOS R5 is fantastic and checks off so many boxes.

What’s going around the internet about the Canon EOS R5 is all about video issues and overheating in 8K video mode. But if you’re a photographer and don’t really care about that or you want to shoot in a different mode, then I’m sure you’re going to love the Canon EOS R5. This camera has most of Canon’s best technology packed into one body. New to it is image stabilization, and it can deliver up to 8 stops of IS with specific lenses. There’s also the token weather sealing and a brand new sensor from Canon. We all thought we’d get a 50+ MP sensor, but we’re getting a 45MP full frame sensor. For most photographers’ needs, that’s enough. Let’s dive into this camera!

Specs taken from the LensRentals Listing

Canon is basically making the EOS R5 into their mirrorless 5D series. And when you look at it, you can totally see its DNA being passed down. Of course, it’s all miniaturized in a way. So, let’s take a closer look.

First off, the Canon EOS R5 retains the option to have the shutter come down over the sensor. When the camera is turned off, it will do this to protect it. And that’s awesome for many photographers. You can turn this off. Better yet, I think it could be taken even further by making the shutter come down when the camera doesn’t have a lens attached at all. This could be done via a sensor associated with the contact pins. So many people take the lenses off their cameras and don’t turn the cameras off first.

The Canon EOS R5 has two card slots. One is for holding SD cards, and the other is for CFExpress. If you’re using the latter, make sure you have a reader for it too. What this means is that you’re best off making sure that all images are written to both cards at the same time. Of course, this door is also weather sealed. So, if you’re in a bind, keep it shut!

Here’s a look at the back of the camera. Notice how the magic touch bar is gone? It’s been replaced with a joystick that I think should be where the magnification button is. But this was a big issue for lots of photographers and now it’s fixed. You lose all the buttons on the left side the way you would have them with a 5D, but that’s what you get with a smaller body.

The top of the camera has the standard Canon stuff. There’s an LCD here with the Canon EOS R5 that you don’t get with the R6 or the Rp. But the m-fn button and two exposure controls are up here.

Luckily for everyone, the new battery from Canon that delivers more juice fits into the Canon EOS R5 easily. So, too, do your old Canon batteries. This was a brilliant move.

On the other side of the Canon EOS R5 are all the ports that you’ll need. That’s it!

Though we’re not done with our full review, we’re very impressed so far with how the build quality on the Canon EOS R5 handles. In the rain, it shrugged off any and all precipitation. This is wonderful to know for people who owned the Canon 5D series of cameras. You can rest assured that your gear is going to keep working in harsh conditions. I remember when I took the 5D Mk II into Hurricane Sandy, and it survived. But this could survive worse from my understanding. As long as you have a weather-sealed lens attached, you’re all set. Canon’s only weather-sealed lenses as of publishing are L lenses. When more third party options become available, that could change. If you’re adapting a lens to the Canon EOS R5 using an official Canon adapter, then you’ll retain weather sealing as long as the adapted lens is also sealed.

In the hand, the Canon EOS R5 feels a lot like a 60D, 70D, 80D, and 90D. Anything before that felt more significant, beefier, and arguably more elegant. And the Canon EOS R5 doesn’t really feel elegant but more like a serious camera. Though not as serious as the 5D or 7D series. One thing that folks are praising is getting rid of the magic touch bar in place of the joystick. I knew from the start that the joystick was in a weird spot, and I maintain this feeling. It’s oddly placed. That, and I really wish that the traditional Canon back dial were larger. However, I can get used to it.

If you’re a Canon user, then everything will be pretty intuitive. This is one of the first cameras that I didn’t really modify right out of the box because I didn’t need to. Everything I need and want to work with has a button. And that’s awesome. Canon also retains its excellent menu system in the Canon EOS R5. The only thing that I continue to find odd is how Canon doesn’t let you connect their cameras to a computer as a hard drive or even control how the USB functionality is determined. This has been going on for years, though, and it’s pretty annoying.

If you are/were a Canon EOS R user, then know that you’re getting the same camera but with some more serious upgrades. Other things that photographers may need to get used to are the new dials. Of course, there’s the one around the lenses, but then there’s also the one on the top back of the camera. It’s easy to adapt to, though.

There isn’t a lot to complain about with the autofocus on the Canon EOS R5. It works well in low light, in good light, and for street photography so far. Could it be faster? Maybe a bit. It could also perhaps be a bit smarter for face detection. But the face and eye detection in the camera already works well for portraiture. To ask it for work for street photography is something extra, and I’m not even sure Sony is consistently that good. We have to do a lot more testing in regards to the autofocus, though, so stay tuned.

What you might want to know in the age of COVID: the face detection system still detects a face, but not necessarily the eyes when a mask is on. It also depends on what kind of mask someone is wearing. My N95 mask throws off the camera more than a standard medical mask.

Here are sample images so far.