So You Want to Buy a Leica…You Should Know This If you want to buy a Leica, you’re most likely going for a Leica M camera and need to know these things.

Someone out there will tell you they’re thinking about buying a Leica. What they typically mean by this is a Leica M camera. The Leica M isn’t necessarily for the photographer with a lot of money. Instead, it’s for the photographer who wants to create and capture photos in a completely different way. The inherent design and functionality of a Leica go against much of what modern tech is. Yet somehow or another, a Leica M can be a better image capturing device than others on the market. In the past few years, Leica cameras have gone down in price and on the second-hand market: it’s not difficult to find a good one. So if you want a Leica, then we’re going to talk you through the purchasing process.

Editor’s Note: I’d like to address something very important to us here at the Phoblographer. First off, none of us are swimming in money. We make a small portion off of any purchase you make after clicking our links. Those finances go towards paying our staff, our server bill, and our other expenses. We’re proud to say that we’re amongst the few photo publications that pay their workers an ethical rate. Every purchase you make helps:

We’ve been told before that we’re driving up the hype and the prices of the market. God forbid: a journalist trying to do their job! Ughhhh! We’d like to retort that in our 10 years of publishing this site, film culture probably would not be what it is. We’ve done a lot to ensure that film photography and analog culture is alive and well. Other prominent photo publications don’t bat an eye at it until we take first stab. With that said, we think everyone should recognize the work we’ve done not only in our reporting but also our reviews. We’re the only modern, accredited photography blog that reviews film emulsions and vintage cameras. Okay, that’s enough. Let’s help you buy a Leica now. The first thing I’m going to tell you to do is to buy them second hand. If you want something new and digital, I strongly recommend going and getting a new one. The same applies to specific lenses. But if you can find an excellent copy of whatever camera or lens you’re looking for, go second hand. The reasons for this are numerous. First off, Leica cameras and lenses are built like tanks. Since the beginning, the company worked to ensure that both moisture and dust don’t get into the camera. That adds to the reliability. Next, there are lots of great places for you to get a second-hand Leica. Our choice is Adorama, but there are loads of Facebook groups and other spots where you can also get your hands on them. If you’re the type of person who wants to make a purchase in-person, then Craigslist or Adorama is best.

Another reason why you buy them second hand isn’t really just the price. You also know that someone else tested it and tried it out. So you know that it works unless they state otherwise. Additionally, you get patina on a camera. Patina is wear and tear: it makes the camera look better. It doesn’t need to look pristine, and I typically recommend that you don’t let it look perfect. Leica M cameras are meant to be used as tools and not stared at. Of course, if you happen to get one of those Lenny Kravitz cameras, then I recommend keeping that thing on a shelf where it belongs. The Leica M is a rangefinder camera. Focus is done manually through a picture in picture interface. You won’t see the depth of field and sometimes you’ll see the lens in the viewfinder, but that’s standard. You do not see what the camera sees, you see what you see. Use this to figure out when someone or something will come into the frame lines before you shoot. Leica M cameras are typically the best when it comes to build quality and feel. They’re also the most expensive of the bunch. But Voigtlander and Zeiss have also had some good options on the market. When it comes to lenses and cameras, it goes:

In terms of build quality Leica is on the top. You’re paying for build quality in addition to access to a lens selection that does something extraordinary. We’ll get to this more in a bit.

What Do You Use a Leica For? 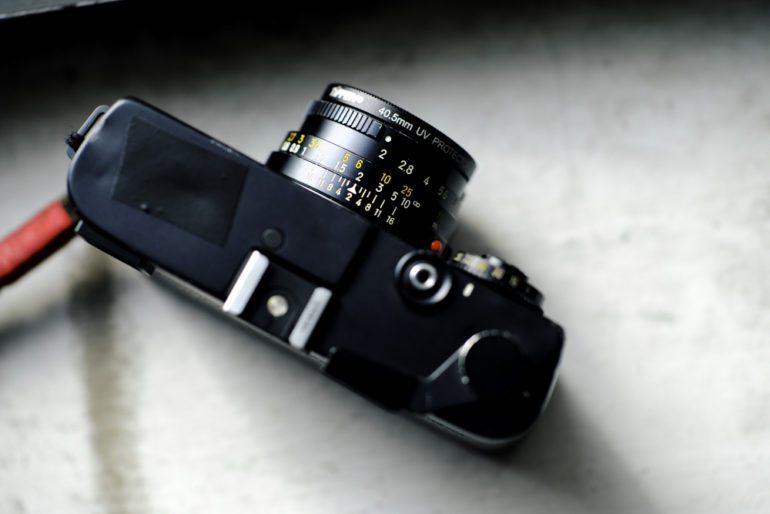 Photographers traditionally have used a Leica M camera for two things: documenting a scene as something is happening and as a piece of jewelry to hang around the neck or across the shoulder. These cameras are very much meant to record a scene. Notice how I keep saying document vs. create. Very few folks use Leica cameras to create. They’re not really designed for that. No Leica has a double exposure mode worth talking about.

Additionally, they never really developed their flash system. It was always more of an afterthought. So second curtain flash, stroboscopic, and other flash effects need to be done with either their very expensive flashes or studio strobes. Still, I’ve never seen a good reason to use Leica M cameras in the studio.

The other reason to buy a Leica M camera is for the jewelry around your shoulder or neck. There’s nothing wrong with flaunting a Leica that you worked hard for and earned. On the contrary, I guess there’s also nothing wrong with showing off your privilege. Just don’t be a jerk about it.

Back to really using a Leica, there are several things that make a Leica really great for documentary shooters: We’ve talked about Leica build quality before. Of course, you’re most likely going to go for a Leica camera vs. a Voigtlander or a Zeiss. Take it from experience, Leica is better. When you’re caught in a rain shower, and you want to capture the moment in the rain, the Leica will survive. However, the Leica will survive if you pair it with good lenses. For what it’s worth, I’ve tested the Leica cameras I’ve owned with Leica, Zeiss, and 7Artisans lenses. All of them hold up when it comes to build quality. 7Artisans lenses have a weird hole towards the bottom that makes me antsy, but the build quality is there.

Functionally speaking, my rule when it comes to film photography is to go as analog as possible. By that, I mean no or little electronics. Some cameras work fine without batteries in them and function at every shutter speed flawlessly. Others don’t work as well. The holy grail when it comes to Leica M cameras for me is the M4-P and the Leica M6. The M4-P is the most perfect, all-analog Leica M you can get your hands on while the Leica M6 is all you need. There is a lot of hype around these cameras though, and the prices will go up. One thing that is very temperamental with Leica M cameras is the rangefinder. You’ll need to get these calibrated every now and again to ensure they’re focusing correctly at the right distance. Again, this is due to how the rangefinder works. The lenses will still focus out to three feet away if you focus the lens to that distance, but the rangefinder might not show you this.

To use a Rangefinder camera is to really sit and think about it carefully. When they start out, lots of folks simply put the lens to their eye and try to line up the focusing. This is the most amateur way of using a rangefinder. Instead, a Leica is a tool that teaches you to be very in tune with your environment in a different way. Here’s how you use a Leica:

When you’re this in tune with the scene in front of you, you can shoot and capture everyday moments faster than autofocus can acquire them. We’ve touched on this briefly before. Even though I own a Leica M6 TTL right now, analog is better. Cameras with no electronics (full analog) will break far less quickly. They’ll continue to fully work most of the time. You just have to study the lighting situation that you’re in and shoot accordingly. If you’re that much of a master at shooting, then you’ll be all set. But the rest of us should look for assistance from the light meters built into the cameras. That’s not to say that the cameras without electronics aren’t constructed well. They surely are. But look at it this way: I’d instead not rely on the crutch of a built-in light meter to begin with than have it suddenly fall out from under me.

Luckily, there are tons of lenses available on the market. I’m not the type to use a lens designed for M39 screw-mount with an adapter on a Leica. But if the lens has been adapted, then we’re all game. Leica lenses are so expensive because of their design. They’re made to be small, allow a lot of light in, built well, and the light rays hit the film or sensor differently. This delivers the Leica look most other cameras can’t reproduce. Other lenses from other manufacturers have excellent lenses, but to the best of their reps’ knowledge, their lenses don’t have such steep angles. There are cheaper lenses than Leica M options, and they deliver outstanding image quality. But if you’re looking for build quality, then go for a Leica.