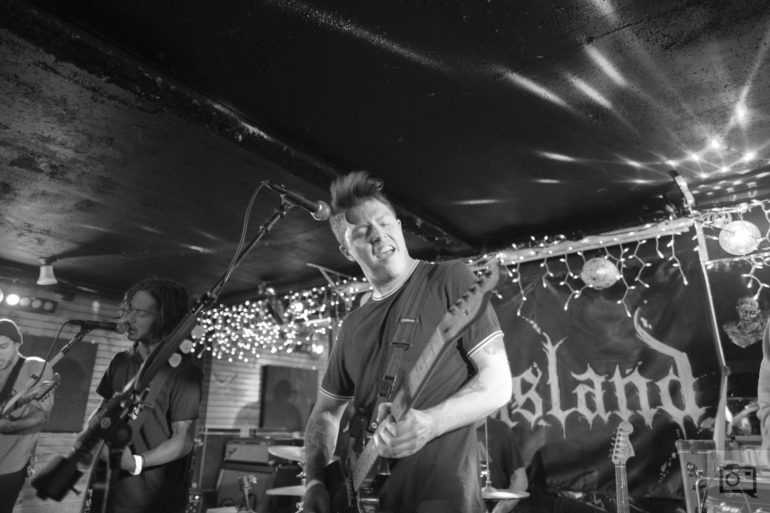 We recently took the Nikon z7 and the Fujifilm X-T2 to an Ataris concert; the results really shocked us.

“Think they’ll mind if I bring a camera?” I said to Reviews Editor Paul Ip in a text message a few hours before we went to see the Ataris together. Ultimately, they didn’t mind at all; that’s the honest truth about how this post is coming together. This wasn’t planned, and it isn’t a formalized test because, well, it would be completely stupid and nonsensical to make this into a formalized test. When Reviews Editor Paul Ip and I decided to use the Nikon z7 and the Fujifilm XT2 to shoot the Ataris concert, we got to the front row of the very tightly packed Kingsland venue in Brooklyn, and we shot. We couldn’t get the center, we couldn’t even really move lest we surrendered our spot. But we made the most of it, and we learned a lot about the Nikon z7 and the Fujifilm X-T2. On the Nikon z7 we used the Nikon 35mm f1.8. For the Fujifilm X-T2 the 16mm f1.4 was attached. This isn’t the closest comparison at all since the Fujifilm renders a 24mm field of view and the Nikon has a 35mm. The Fujifilm is also a smaller sensor and therefore has a deeper depth of field, theoretically allowing it to have an easier time acquiring focus. To top this off, the Fujifilm has a boost mode to further enhance the performance. But as we’ve seen in previous tests with different manufacturers, size doesn’t mean everything. To Nikon’s advantage, Fujifilm’s f1.4 lenses aren’t their fastest glass.

The Fujifilm X-T2: A Speed Demon When using the Fujifilm X-T2 I decided I’d shoot in Acros mode; later on I even decided to apply the grain effect. Fully knowing and accepting this, I just rolled with it because I had to shoot at ISO 6400 for most of the show. That’s to be expected–it always has been. Shooting at f1.4 and at a fast enough shutter speed allowed me to nail most of the photos. When Paul took the camera from me and shot in Provia, I didn’t like the results anywhere as much. The Fujifilm XT2 allowed me to choose my focusing point quickly and even sometime attained face detection with little trouble. In those instances, it would track the faces as they moved through the scene and it did so with little difficulty. This was incredibly amazing given the very low light and constantly color changing lights that did come on. But after years of using Fujifilm cameras, I knew that it could do it. The battery life also held its own very well until Paul turned on the boost mode. When that happened, the Fujifilm XT2 overheated in our hands and when returned to me, I needed to switch it off.

To track the performers what I often did was a number of methods: For the most part it worked well enough. Years ago when using the Fujifilm X Pro 1, I was able to get pretty good results with a similar method. Unfortunately because boost mode had been used, the Fujifilm XT2 died faster than the Nikon z7 despite the Fujifilm XT2 being fully charged that day and the Nikon running on the same battery charge for over a week. In some ways, I’d liken the Fujifilm XT2 to the older Sony batteries that meant that a photographer bought a single camera and five batteries. That isn’t the case anymore for Sony, and Fujifilm will need to up their battery game too. Time after time, the Fujifilm XT2 focused quickly and nailed the focusing faster and more accurately than the Nikon did. Best of all it did it with ease. For budding concert photographers, I think that Fujifilm has what you need. I’ve had folks ask me about the autofocus system in low light and I really need to vouch for it after all those firmware updates. If you want to shoot concerts and want a small system, this is it. You can stuff this camera, a battery or two, two other small primes or more into a small messenger bag and be all set to go shoot. Set the camera to Acros mode and enjoy! In addition to that, it’s weather sealed–or at least this setup was. So if someone spills beer on the camera you’ll probably be fine.

The Nikon Z7: A Let Down The Nikon z 7 proved to me more so than ever that it’s pretty much a hot mess when it comes to focusing in low lighting situations. We tried a number of different methods to focus. Let’s list them all out though: With all that out of the way, the Nikon z7 wasn’t always able to attain focus on the musicians as they moved around. Time after time, Fujifilm pretty much ran circles around the Nikon z7 when it came to getting critical focus. What made things worse was the constantly changing lighting situation in the venue. That’s just a reality of shooting concerts in small venues, as anyone will tell you: the lighting situation isn’t always ideal. We also just went along with Nikon’s own Vivid color scheme here.

When using the Nikon z7, and I really hate to admit this, I really wish that I instead had the Nikon D850. It’s a camera that is leaps and bounds better when it comes to focusing. Despite its larger size, it would have given me much better photos. A two-year old autofocus system beat out Nikon’s. That’s shocking to me. Nikon has had years to get this right, and the fact that the autofocus system isn’t that great is pretty disappointing. The battery life is surely there, and maybe this camera is better served in a studio. But that doesn’t excuse performance like this when the Nikon D850 can outperform it.

We’re disappointed that the Nikon z7 didn’t do that well. And we can’t recommend it for fast-paced, low light shooting. Couple this with the single XQD card slot and the camera has an even bigger mark against it.