Mark Broyer Shares the Beauty of Foggy Nights in Hamburg

All images by Mark Broyer. Used with Creative Commons Permission.

The hours between dusk and dawn are certainly favorite times for many photographers, despite the lighting conditions being mostly challenging. In a previous feature, we’ve seen Hamburg-based Mark Broyer document the beautiful glow that his city takes on during the colorful after hours. For today’s night photography and street photography inspiration, we follow him again as he continues his nighttime adventures, this time catching the misty beauty of a foggy night in Hamburg.

On clear nights, Mark was able to capture Hamburg’s vibrant alter-ego, while the rest of the city sleeps and everything has gone silent. Despite the lack of activity, After Hours in Hamburg was a visual treat, and a success for his mission to capture beauty in the ordinary. What if we add a little bit of precipitation? The result is just as visually appealing, as we see in Mark’s latest night photography work. Look at these photos! They almost look like those cinematic moments from the 80s involving neon lights and such. I mean, just imagine Stranger Things and you’ve got this look spot on! “What the Fog?” I imagine him asking himself during one of these nighttime strolls, the fog slowly creeping in to envelope the city. The witty question, and the idea for this set catches on. Mark goes to capture a more moody and mysterious version of Hamburg’s after hours, where the bright windows and shop signs are replaced with empty roads and wide parking lots. The fog acts as some sort of diffuser, scattering the light and creating a soft glow of color throughout his frames. 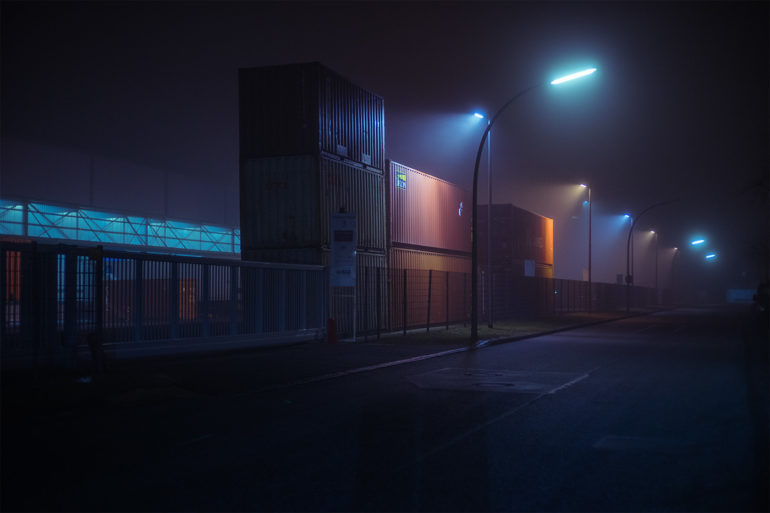 While this misty version certainly feels more quiet and eerie than Mark’s original after hours sets, it nicely demonstrates the drama many photographers actually seek to capture in their cities. The dreamy, misty visuals usually look flawless in nature and outdoor photos, but it also adds an interesting cinematic touch to street photography, as we can see in this set.

Make sure to check out Mark Broyer’s Behance profile to give him some props for What the Fog and see the rest of his beautiful sets.