All images by Mako Miyamoto. Used with Creative Commons permission.

With space exploration currently making bigger and bigger leaps in technology and scope, it’s not surprising more and more creative minds are filling the gaps with their imagination. It’s interesting to see how conceptual photography has been picking up the pace, often borrowing themes, aesthetics, and story lines from some iconic space-themed science fiction flicks. Portland-based Mako Miyamoto brings us yet another interesting take on mankind’s quest to find the next alien lands to colonize.

At first glance, Mako’s Further West chronicles the adventures of a group of space explorers who make it to a foreign land teeming with life. However, a closer look tells us that it goes further than the idea of the “just landed” scenarios, which we’ve previously seen from the equally intriguing stories by Maximilian Motel and Ken Hermann. Here, we get a glimpse of what happens next: successfully colonizing a habitable extraterrestrial world. 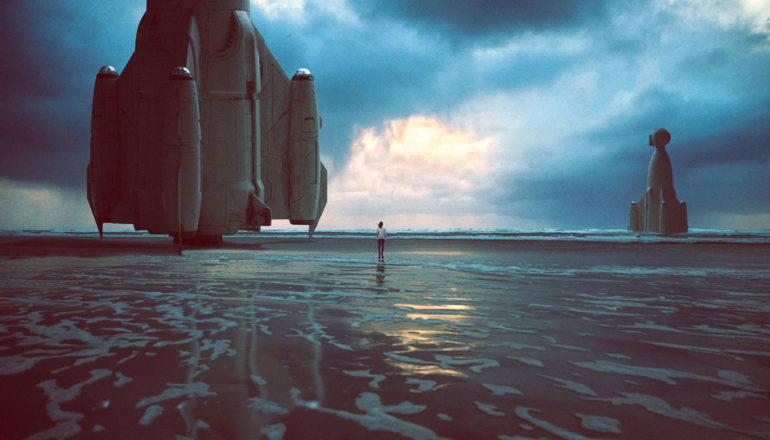 Here, we see an advanced settlement thriving on alien soil, where humans have built Earth-like cities and co-exist with machines and alien creatures (which, on an amusing note, is evidently a homage to the endearing Star Wars character Chewbacca the Wookie). Everything about this set is meant to tickle the sci-fi fan’s fancy, but this work of art which combines portraiture, model making, and landscape photography also calls for some deeper thinking.

Mako provided a rationale for his set that is much closer to home, one that reframes the idea of imperialism in American history. Alluding to the expeditions, conquests, and pioneering that brought forth America as we know it, the title itself looks into our collective history as creatures with a propensity for exploration and colonization. “Further West explores a revisionist’s vision of manifest destiny. Refugees and pioneers on the brink of the unknown step onto foreign soil, engulfed by the sprawl of the landscape before them they begin to shape the world,” Mako says. “The known and unknown collide, as natural and constructed spaces become augmented, and mid-century Americana culture adapts, shifts, and changes its trajectory toward a new and uncertain future.”

Visit Mako Miyamoto’s Behance portfolio to see more of Further West and check out his other works (there are plenty of Wookies to ogle at, if that helps to convince you).