When Fujifilm announced their medium format digital camera, a whole lot of people really wanted it to be something along the lines of the Fujifilm GW690 III camera–also known as the Texas Leica. This rangefinder camera shoots in the 6×9 format–which is one of the largest formats to use 120 film. For many years it was used by hobbyists, travel photographers, landscape photographers, and even a few portrait shooters. Due to its 90mm lens equivalent, you’re getting around a 38mm f1.2 equivalent when it comes to field of view converted to full frame.

When I purchasef this camera, I genuinely thought it would be the perfect medium format rangefinder for me, doing pretty much everything the Mamiya 7 II is capable of sans interchangeable lenses. But with more experience, I learned that I was wrong.

All film was kindly developed by Lomography in NYC. They do a fantastic job and if you’ve never tried them, you really should.

The Fujifilm GW690 III was used with the Flashpoint Zoom Li-On flash and radio in addition to various Kodak and Lomography films.

The best bet for reading about this camera’s specific tech specs will be best found in the PDF found on this website. When you look at the Fujifilm GW690 III rangefinder, you see a camera that’s incredibly simple to use. The front of the camera is characterized by the lens, a shutter release button with a lock around it, the rangefinder patch, etc. It’s one of the simpler rangefinders out there and it will remind you a lot of something like a Leica M2–except far larger and with a fixed lens. Turn to the top of the Fujifilm GW690 III and you’ll start to see more controls. The 6×9 format gives you eight images per roll. But you can load it up with 220 film if you find it or get only four exposures. Plus there’s a bubble level, shutter release, and the film advance. Looking at the lens what you’ll be able to find are the exposure controls once you flip the lens hood up. There are two rings: one for aperture and another for shutter speeds. Then there is the manual focus ring used for focusing. Thankfully, Fujifilm also included zone focusing markers. Turn to the back of the Fujifilm GW690 III and you’ll find some ergonomics that make holding the camera easier to use in addition to a spot to put little notes (or pieces of the film wrapper for you to remember what film you’ve got loaded).

Then there is the viewfinder: which needs adapter lenses to change the diopter. This camera is well built, but also feels pretty plasticky. For a camera of this size, I’d expect more metal to be incorporated but then you start to realize how heavy the camera would get. Plastic makes sense. When you tap on certain parts, you start to wonder why the camera feels that way but, through continued use, you’ll see it’s fairly well built.

The Fujifilm GW690 III also has no electronics built in, so you’re going to rely instead on a hand held light meter of some sort. This ensures that the camera continues to keep working. 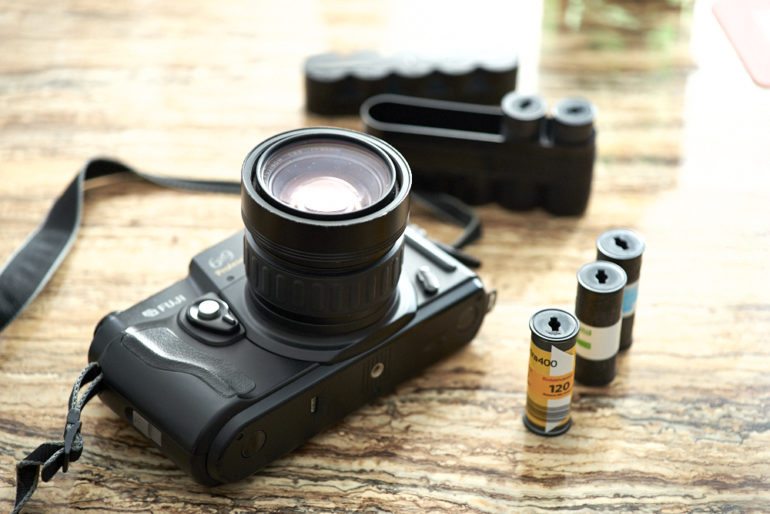 If you’re very used to working with film cameras, then this will be business as usual. Essentially, you want to keep the format at eight images and perhaps also lock the shutter button on the front of the camera–not the top. It’s easy to accidentally hit this button unless you need to use it. Focusing the Fujifilm GW690 III is done manually. You’ll focus using the focus ring and by looking through the viewfinder. It’s got a pretty bright viewfinder and makes focusing even with bad eyesight pretty simple. Otherwise, you can also use the zone focusing aids on the lens.

Guess what? There’s no light meter built in. You’ll either end up using the good old Sunny 16 method, an external camera meter, or your digital camera to get an idea of what you need. 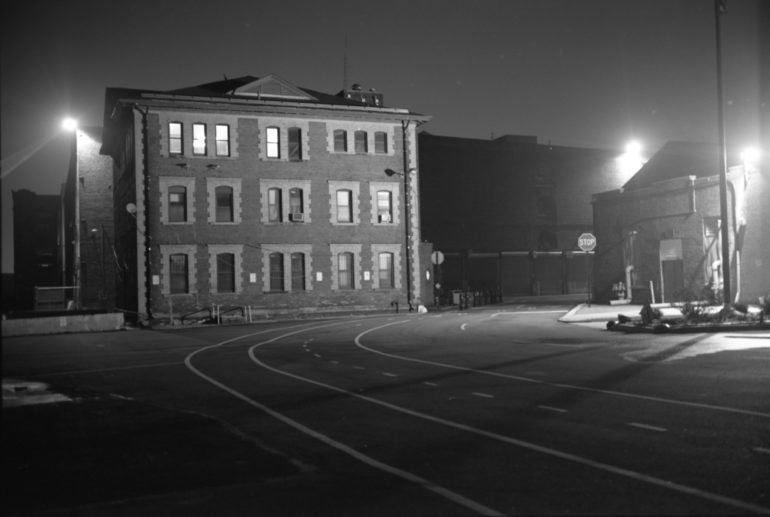 This camera was mostly designed for landscape photographers, but my version has the 90mm f3.5 lens– and to me that makes for an awesome wide portrait option. Overall, I really can’t complain about this lens and the camera’s image quality. If you’re an experienced photographer who works incredibly carefully with the scene, knows the film you’re working with, and has a creative vision for each shot you take, then you’re going to love it.

The Fujifilm GW690 III is truly a creator’s camera. You want bokeh? Here you go. And balanced with sharpness too. Want more bokeh? Here, take it. You’ll get lots of bokeh. Wide open the lens is pretty much the equivalent of an f1.2 when it comes to depth of field and converting to 35mm format. It’s beautiful and fun to use. Yup, lots of sharpness. I wish I could hack this lens onto a modern day 35mm film camera.

I’ve been using the Fujifilm GW690 III for a really long time now. By far, it’s my most used medium format film camera, even over my Mamiya RB67 Pro S. That’s because it’s got a small(ish) size, fantastic lens, rangefinder focusing, and it’s reliable. Sure, you’re only getting eight shots per 120 film roll, but if you’re careful then that’s enough.

I not only see this as a fantastic camera for landscape photographers, but also for portrait photographers. When used with an off-camera flash you’re going to get so much out of that lens. Combine this with using new film and you’re getting beautiful photos every time. It’s hard to give that up and it’s also hard to get this look in digital. I mean there are very few 35mm f1.2 lenses out there; but that’s the look you’re getting.

But with this camera, you’re getting that look. And if that doesn’t sell you on it, I’m not quite sure that will.