All images and review by Edward Inzauto.

Just like the pros, getting “that full-frame look” is a growing desire among enthusiast amateur photographers. The topic is a trend in gear-obsessive online discussion and a bug in the brains of those who feel that only a larger sensor will allow them to fully express their creative visions. And while many have taken advantage of the fact that buying into the full-frame DSLR and mirrorless camera market is less expensive than ever, still others will find that the upfront cost of a modern full-frame camera body and compatible lenses is still a significant and insurmountable barrier to entry.

But what if you could go bigger than full-frame — even-fuller-frame, per se — for significantly less money? Well, my friend, you absolutely can. The solution you’re looking for is medium format film, and one fine entry-level option for exposing that timeless, removable, chemical “sensor” technology is the Zenza Bronica ETR line of cameras.

Editor’s Note: All processing was kindly done by the Lomography Gallery store here in NYC. You should check out all the services that they can do. The ETRS’s body is essentially a cubic box with a mirror in it, and just a few controls on the sides and front. The left side has a shutter speed knob that adjusts with nice, clunky resistance from 1/500 of a second all the way down to 8 seconds. A Time shutter setting is also available via a switch on the camera’s leaf-shutter lenses. This leaf-shutter design is the reason the maximum shutter speed is notably slower than your average DSLR or 35mm film camera, but it also makes flash synch available at all shutter speeds. In contrast, the ETR line’s direct competitor, the focal-plane-shutter-equipped Mamiya M645 Super, can shut out a stop more light at 1/1000 of a second, but only supports flash synch up to 1/60 of a second. Slow film stocks, narrow apertures, or ND filters are a necessity for bright, daytime shooting with the ETRS, and I often find myself shooting at the maximum shutter speed of 1/500 with this camera when fighting the sun.

That particular shutter speed of 1/500 is also notable in that it is the camera’s only mechanical shutter speed, allowing the camera to operate without a battery. The ETRS requires one common and inexpensive 544 battery to operate at all other shutter speeds, so it makes perfect sense that the battery check button sits right beside the shutter speed dial, producing a bright red light in the finder when pressed with a good battery installed. Along the bottom of the camera’s left side, from front to rear, are the lens release switch, cable release socket, and film back release button. And on the right side of the camera are the film-winding (as well as shutter-cocking and mirror-resetting) crank, and the multiple-exposure lever. The ETRSi also adds a mirror lock-up lever, which is one compelling argument for selecting the newer model (along with TTL flash metering and a true Bulb shutter setting). The shutter release button, with a shutter lock dial surrounding it, joins the lens mount and flash synch socket on the front of the camera, while the top and back of the camera body are essentially open spaces where one can attach whatever configuration of viewfinder (waist-level, prism, metered prism) and film back (120, 220, Polaroid) one desires. The standard film crank can also be swapped out for an electrically contacted speed grip that features a more familiar shutter release, hot shoe, and film advance lever. This potential for customization is why I consider the Bronica ETRS a modular photographic system rather than just a standard camera model. At its most svelte, the ETRS I use features the waist-level finder and standard film crank. This keeps the weight down, but perhaps hurts its ergonomics, depending on how you prefer to shoot. With this finder, shooting the ETRS feel like cradling a precious treasure in front of you as you line up your shot, assuming you’re not working off of a tripod. Everything in the ground glass is a mirror image of the world in front of the lens, so framing takes some getting used to. It’s a deliberate process and can be frustrating at times, especially when leveling the horizon or shooting at off angles is involved. Shooting in portrait orientation with the waist-level finder is nearly impossible. Nearly. But that measured and methodical way of shooting photographs can also feel meditative and soothing. It can make you feel like you’re actually participating in the art of photography, and not just taking pictures. Unfolding and winding the crank on the side of the camera to advance the film and manually reset both the mirror and shutter can be immensely satisfying. And remember that this is a fully manual camera in its basic configuration. That means manual focus and manual exposure, but even further, the ETRS does not have a built-in light meter so you’ll be using your handy pocket light meter, cellphone app, or the indispensable Sunny 16 rule to expose correctly. No matter which metering route you take, the ETRS produces accurate exposures, and your photography process will feel decidedly Zen. 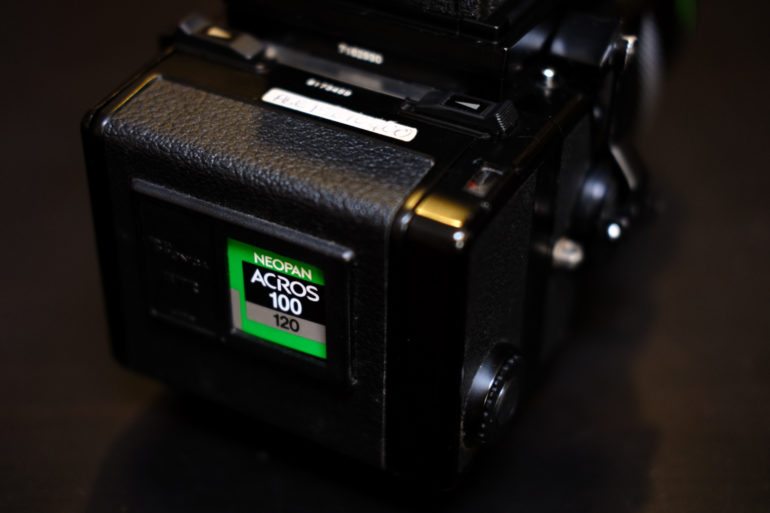 Alternatively, the prism finders combined with the speed grip make the ETRS handle much more like a classic 35mm SLR. The subjects beyond the lens appear and move just as expected — not backwards — and the shutter release and film advance levers fall under the index finger and thumb of the right hand, respectively. Two of the three available prism finders even add a meter to the ETRS, providing both aperture priority (called “automatic exposure” by Bronica) and metered manual modes, as well as exposure compensation. It’s an entirely different way of shooting from the non-metered waist-level finder and standard shutter release, but the ETRS makes both possible, depending on the photographer’s preferences. Now let’s talk about the ETRS itself. If you’re coming from a small mirrorless camera like a Fujifilm X-T10 or Sony a6300, the ETRS is going to feel like a bit of a brick in your hands, but it’s really not all that much more massive than a large DSLR. In fact, mine weighs about 2 lbs. 13 oz. with a waist-level finder, 120 back, and 75mm f/2.8 lens, almost exactly matching the Nikon D7200 with its battery and kit lens, so it’s not going to break your back and the camera-to-negative size ratio is fairly low. The Zenza Bronica ETR cameras are a series of modular single-lens reflex camera systems that were manufactured, in some variant or another, from 1976 right on up through 2004. Each model incrementally improved upon its predecessor, but the tangible experience of using each model feels roughly the same, and of course image quality will be identical when using the same lenses and the same film. For the purposes of this review I’ll be focusing primarily on the ETRS, which is the middle sibling of the original ETR and the all-bells-and-whistles ETRSi, and seems to be the most widely available at the best prices on the used market. Prices for the entire line range from around $100 to $500 depending on the camera’s configuration of lens/finder/back/etc.

I caught the medium format bug after a foray into 35mm film photography left me wanting more. Digital sensors in 2016 are very good, and in search of appreciable bumps in resolution and dynamic range, I found my way to the 645 format via the ETRS for its combination of reasonably small size and weight (relative to other medium format options), affordable price, and potential image quality with the right film emulsions. You see, the 645 format is 6cm x 4.5cm, which gives it around 2.5 times the area of a full-frame sensor or 35mm film frame. Thats roughly the same jump in size as from APS-C to full frame. In plainer terms: way bigger. However you use the camera, manual focusing with Zenzanon lenses is a smooth affair, though holding the camera, focusing, and pressing the shutter release can sometimes feel awkward in the base configuration. The focus throw on the 75mm is a little long at over 180 degrees rotation to go from minimum focus distance (just under two feet) to infinity, so again, the ETRS isn’t exactly a run-and-gun sort of tool. What this range of motion does offer, however, is precision in focusing. That control is much appreciated when shooting wide open at f/2.8, especially at closer focusing distances where the depth of field can get pretty shallow due to the camera’s large negative size. I rarely come away with an out-of-focus shot with the ETRS because of this long focus throw and the convenient and easily actuated depth-of-field preview button on the side of the lens. The ground glass is also wonderfully crisp, which makes every scene pop in a three-dimensional way that’s beyond comparison with typical optical or electronic viewfinders. There’s a bit of magic in there. When you get your processed negatives back, you’ll see the other bit of magic that comes from the combination of great, big, film stock and the optically excellent Zenzanon lenses. While the particular lens in use for this review has Bronica’s latest coatings, it doesn’t seem to provide an abundance of inherent contrast, but the images rendered are sharp with minimal if any distortion or chromatic aberration, and feature nice, smooth falloff from in-focus to out-of-focus areas in the frame. The bokeh produced by this 75mm lens (~50mm full-frame equivalent field of view) feels just a bit frenetic wide open at f/2.8 in shots with busy backgrounds, but it’s buttery smooth when wider swaths of more even tones are present, and stopping down to f/8 or f/16 (maximum of f/22) brings a great depth of field into focus.

Have a look at the example images in this review for an idea of the kind of image quality to expect out of this camera using Fujifilm Acros 100, Ilford Delta 400, and Kodak Ektar 100. They’re all standard quality scans from The Lomography Store in Greenwich Village, NYC, and are completely untouched aside from simple rotation. 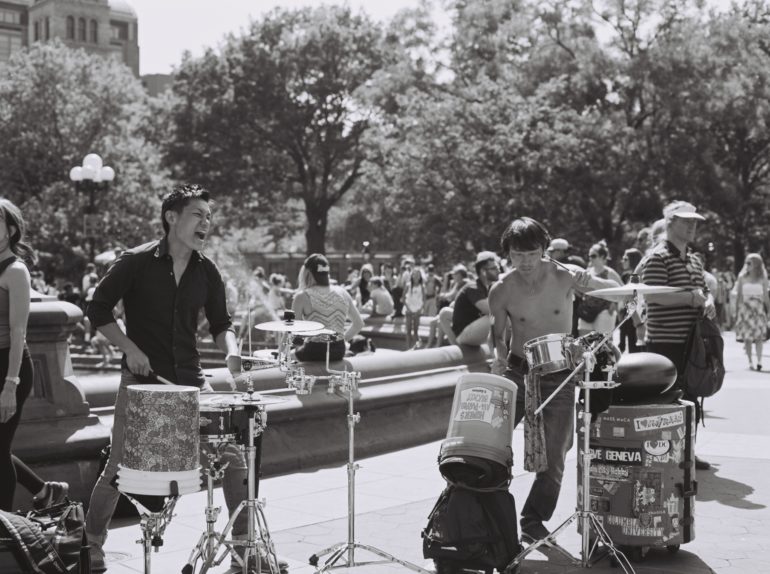 On the whole, images coming out of this camera-and-lens combo are just beautiful, with a that quintessential film look about them and nice subject isolation at wider apertures, where the system performs impressively. The ETR, ETRS, and ETRSi provide value miles above their price point. Though they’re not ideal for the most demanding of shooting situations — i.e. fast-paced work at events, weddings, or sporting contests — they’re a fine choice for the discerning amateur artist and can be useful tools for professional portraiture, landscape photography, or even some street shooting. This is just a great all-around system with lots of options, and it makes shooting fun and interesting. Highly recommended.

We give the Bronica ETRS 4 out of 5 stars.