Consider the recent rise in Tungsten film and you get a great explanation for why the KONO! Kolorit 400 Tungsten Film could be so popular with portrait photographers. Like CineStill 800T, this film is a Tungsten film and designed to be shot in doors, in cloudy weather, during the night, etc. It’s very much unlike daylight film and my favorite way of using it is to often just use strobe lighting to get the best effect that I can.

Combine this with the fact that Tungsten film often delivers what are in my opinion better skin tones than Kodak Portra and the fact that emulating this look and the tones in digital is pretty tough, and you’ve got yourself a very good option to use this little analogue beauty.

Editor’s Note: This is our experimentation with a full, single page post as part of our evolving website redesign. Let us know your thoughts. Pack of 3 film rolls, 24 exposures each The Kono! 400T film is overall very simple to use. Like other daylight films:

This Tungsten film is what Kono calls “Reanimated.” Essentially what that means is that this is movie film that was repackaged just like CineStill and a few others. So what means is that your images will have a very cinematic look to them if done just right. Something that I really love about this film is how the skin tones look. This image was shot indoors with a flash going off and hitting a window which had a shade over it. It isn’t perfect, but it’s still really beautiful. I’ve achieved better portraits before with Tungsten film but for what it’s worth, this is still very nice. In the right lighting situation you can capture or create an image that is really gorgeous. On top of that, it should be noted just how sharp this film is when combined with good glass and the specularity that a flash can provide. Outdoors though, you can still achieve really awesome images providing you’re shooting at night time. In this image above, the light coming out from the doorway was daylight balanced. You can see what happens in this case. However, this light is Tungsten balanced and hits the scene just perfectly. Keep this in mind when you’re at your favorite bar. 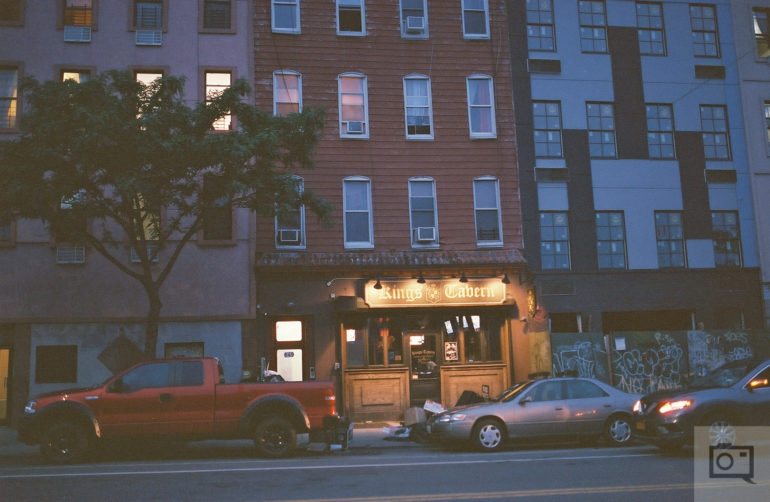 KONO! Kolorit 400 Tungsten Film in 35mm is very fun. It will purposely make you think differently about the images that you take and when combined with a genuine creative vision, lighting knowledge and great subjects then there isn’t a single reason why I wouldn’t recommend it as an alternative to CineStill 800T. For what it’s worth though, I’m very torn on which one I like more.