All images by C. Stephen Hurst. Used with permission.

If you think about some of the best places for street photography, New York City automatically comes up on the list. For years now C. Stephen Hurst has been shooting street. Besides his wedding photography, you can probably argue that his best work is done on the streets or in public. His fashion on the subway work was extremely popular with readers, and it’s a post that I still go back to look at in earnest.

But more than that, Stephen finds ways to document NYC in its most raw, real format and pays attention to the things that most others just walk past. Phoblographer: You’re a wedding shooter–and a lot of that has an emphasis on a photojournalistic and documentary feel. But what about the stuff in the streets that you do where the intention is solely documentary? When it comes to the shooting mentality, how do you feel they differ? Phoblographer: Your photographs of people are very up close, in your face, and processed with lots of midtone adjustment. How do you feel this fits you creative vision? It seems like a very raw way of going about it that brings out details that wouldn’t normally be visible.

Stephen: My creative vision has evolved over the years in terms of toning but the overall arch is to see in the processed image what I didn’t see when taking the image. I like to feel close and connected to my subjects. I am a shy extrovert if such a term exists and have a desire to create a forced intimacy. Phoblographer: What typically triggers you to photograph a moment? Is it the light? Compositions? Emotions felt?

Stephen: This is the gut part of street photography for me. Some streets or subjects just radiate emotion. I try to be open to the possibilities and when in question, press the shutter. The process can be quite meditative: zone focusing, making adjustments blindly with confidence, and being one with my camera requires countless hours of practice and trust, especially since I shoot primarily from the hip. I try to limit my accuations and shoot as if I were shooting film. Make the clicks count. Make the failures mean something. Phoblographer: How much thought goes into the specific framing of your subjects? We all know that framing can greatly change the way a photo feels.

Stephen: As previously stated I shoot primarily from the hip so I try to have a firm understanding of what the 35mm lens frame lines look like when the subject is 4 feet away and the camera is at my navel. This is why studying the failed images is incredibly important for me. I need to know what works and what does not. I try to look for compression when framing. Either the frame lines are collapsing and compressing the subject, or, the subject is on the verge of engulfing the four corners of the image. This is what I’m drawn to for the most part when framing for street photography. Phoblographer: So what’s the intention and end goal for your documentary work? 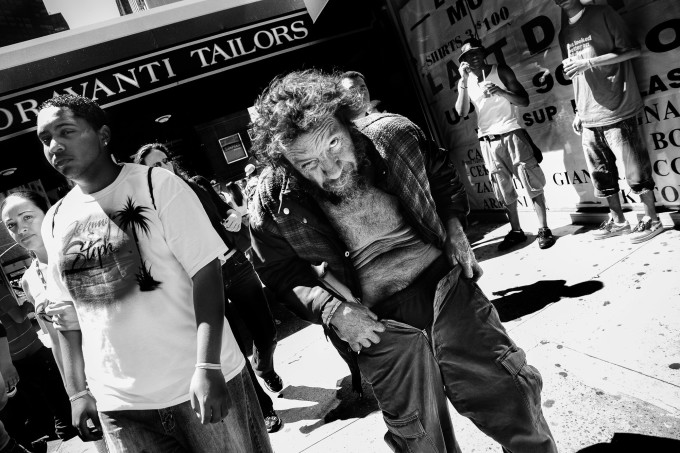