There are lots of photographers out there that believe that an image isn’t really fully through the editing process until it’s printed–and many of those photographers are a part of who the Canon imagePROGRAF PRO-1000 printer is targeted towards. This mentality differs based on a number of factors: age and the types of photographers are two of the main variables. But one thing remains constant: they want absolutely phenomenal printer quality.

Like the photographers who buy L lenses just to say that they have L lenses, this printer has a red marking on it and a mass appeal both to the working professional that isn’t doing super large prints (or has a need to) and the high end enthusiast that spends night and day over minute details in a meticulous manner. It’s a high end printer, but it’s not designed for the creme-de-la-creme of photographers who will only do large format paper/prints.

If you’re a photographer looking to get your work into a gallery or looking to offer your customers something really worthy of hanging up, then this is the one for you–if you can stomach a $1,299.99 price point.

The Canon imagePROGRAF PRO-1000 printer was tested with Canon Photo Paper Pro Luster, the Canon 6D, and a MacBook Pro including an iPhone 6s. TheCanon imagePROGRAF PRO-1000 printer is one that oozes with quality all over it. It also emphasizes simplicity and an overall very nice looking design. On the front of the printer is very little in the way of control to emphasize the ease of use. You’ve got an on/off switch, directional buttons, an LCD screen, and a couple of other flaps and compartments that help to keep the printer more compact when not fully in use. Near the front is one of the most important areas: the output tray. This area is very big to accommodate to 17 inch wide prints. It also expands to hold larger pieces in place when needed. For that, make sure that you’ve got a lot of room as it can expand quite a bit. The top of the printer has the loading tray. There are two flaps here that open up to properly accommodate larger paper and to keep dust and other things out. One is the cover that aligns the paper and the other is the feed slot that also helps to keep it aligned.

The bottom of the printer features the ink well; where you’ll put lots of different cartridges in. These are very straightforward to insert but there are a whole lot of them! Be careful where you stick them.

This is a heavy printer. When and if you’re going to move it, make sure that you’ve got a firm grip on it lest you lose a hold and drop it. It’s also pretty big so you’ll need more space. Later on in the year, I’m getting a specific desk just for this and another printer to do tests on.

There is nothing about the build of this printer that feels cheap. However, a nice touch would have been the inclusion of a touch screen (pun not intended) to navigate the menu system. Epson has this, and it’s a very welcome addition. 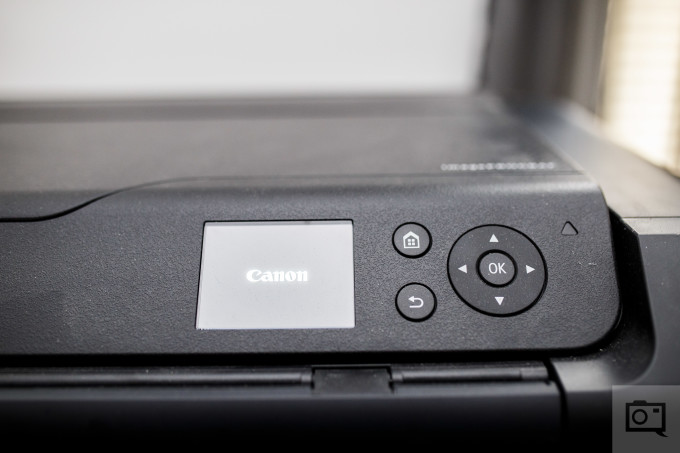 For the most part, this is a plug and play printer. It’ll take a quite for it to set itself up but once it’s ready you’ll have no troubles really printing anything at all. To access most of the functions of the printer, you’ll need to use the direction arrows, the OK button, the home screen and the back button.

That’s if you’re working directly with the printer though. I use Lightroom and print through there; so for the most part I don’t have much of a problem doing any of this because I just go right to the Print section of the program.

“For the most part” has a big emphasis in the previous paragraph. When you’re doing that, you’ll have to load the paper in, select the right paper size on the printer, go to Lightroom, adjust the parameters accordingly, select the ICC profile you want (but it can also be managed by the printer) and then go for it. If you’re using something like Epson or Red River paper with a Canon printer, you may want to change it up a bit depending on the various features of the paper. But that’s up to you ultimately–though I’m sure the crowd that gets this printer will be a tad more meticulous about what they print out. This is also standard procedure with higher end printers and the whole thought process that goes into working with them.

When you’re doing this, make sure that you’re connected to the right wireless hot spot unless you’re hard connected via a cable. Unfortunately, if you change locations or hot spots, the printer won’t remember passwords.

Where this becomes awful to work with is:

But otherwise, it’s not a major issue if you just leave it on the same WiFi router setup.

When printing from the 6D, you get a couple of weird sizes that don’t let you use the printer’s full potential. If you’re a wedding photographer at a wedding trying to sell prints on the spot, that could rob you of some extra potential cash. You’ll still be able to get some, but you won’t be able to take maximum advantage of what this printer offers. For that reason, I kind of feel that Canon is shooting itself in a foot in some ways–especially if you’ve got the “Get it right in camera” mentality! I personally prefer to print one image at a time and get each one looking the best I can. Most pros will probably do the same thing. To that end, there may be a period of time where you don’t turn it on for a while. If you that’s the case, it will realize that and agitate the heck out of the ink to ensure that it prints the best it can. That’s a pretty cool feature. If you’ve been reading Phoblographer for the past couple of months, you’ll have seen lots of product photos shot on paper prints. All of these prints were done with the Prograf 1000 with the exception of the one small food print–which is done by Epson’s P600. When it comes to working with Luster paper, I really have to give it to Canon. Though I may sometimes sounds like an old snobby Canon customer, printing is what they’ve really got down to a T in my opinion in addition to many of their latest lenses.

In like it: in fact, I really like it! Whenever I’ve got an image that I’ve shot and that I really like, I’ll print it using this printer. For some odd reason though, I believe that this printer does Luster better. When I tried working with matte paper, I just didn’t feel the same magic. That is much opposed to what I get from Epson. Epson I generally feel gets it all around: though they’re not beating what Canon can do with luster here. To that end, Epson and matte prints go together very well. That could change though, or maybe I’m just doing something wrong.

I genuinely love this printer. It’s very well worth the money if you’re the type to print fairly large. If you’re not, then maybe go with something smaller. But there is also a big difference between seeing your image on a screen vs in a very big print of something around 17×22 inches. There’s just magic to it if you’ve already got an emotional connection to the piece–and that’s what I feel the photographers who use this printer can really capitalize on: shooting great photos that their clients love and making print sales accordingly. Beyond that, if you’re the enthusiast with some extra money to burn, this printer can help you decorate your apartment/home or even get you some extra cash on the side. Again, the emphasis on printing big is part of what’s so great about this printer.

For the best results, I really recommend going through Lightroom and printing. It’s an excellent printer with a couple of caveats, but for the professional photographer that it’s really intended for and based on most modern trends in photography, this printer more than meets the requirements.

TheCanon imagePROGRAF PRO-1000 printer receives the site’s highest honor of Editor’s Choice Award and 5 out of 5 stars. Want one? Click the previous link for pricing.