All images by Kip Praslowicz. Used with permission. This post is a collaboration with the Sub-Reddit R/Analog.

“I liked to approach each portrait with the same sense of discovery and unpredictability that I’d feel during a street photography session,” says photographer Kip Praslowicz about his photography series called Everyday Life. “I’d spend some time with the subjects in what ever environment they invited me into to get a feel of how they interact with it and use that as inspiration as to how I’d compose the scene.” Kip, who usually shoots street photography, says that Everyday Life was his first foray into shooting portraits influenced by what he’d look for when shooting street images.

The work was done with a 4×5 camera to start then moved into using an 8×10, which taught him that he’s not a fan of what he calls the “dead pan Sothian ‘stand there’ portraits.” Instead, he tries to make them feel like they were caught candidly. Kip: My senior year in high school I took an Industrial Trades course that let the student pick one area of study to focus on each semester. One of the focuses was photography. I chose that the first semester and had so much fun with it that I ended up keeping the focus on photography through all four semesters. A few years later when I started my four-year degree I ended up choosing to enroll as an art minor to keep having access to photography. Phoblographer: What made you want to shoot analog?

Kip: It was the 1990s when I started. Was the only option I had. I also started working with emphasis on 4×5 large format around 2001. Seeing the difference in imaging between 35mm film and large format while watching early digital struggling to match 35mm film just never really gave me a desire to pursue digital.

Phoblographer: Why did you choose to do this project with a 4×5 camera? What made you move into the 8×10 format?

Kip: I wanted to try to do some photographs that would look similar to aesthetics I’d learned doing street photography, but without all the time spent with the crap shoot odds of getting a good photograph that street photography often brings with it. Figured if I was going to slow down and direct the scene more than normal, I might as well bring a tripod. And if I was going to bring a tripod, I might as well slap an even bigger camera onto it. I bought a modern lens and went to work.

The move to 8×10 stemmed from a series of fortunate events. A friend of mine had previously received and old 8×10 Korona camera from someone from free. He put some effort into restoring it some and built it a new set of bellows. He eventually moved out-of-town he handed the camera down to me so that he didn’t have to both moving with it. I monkeyed with it, but never bothered shooting color with it partially due to the cost of shooting 8×10 color, and that the lens on the camera was quite old and highly prone to destructive amounts of flaring. Coincidence #1) Free 8×10 camera. 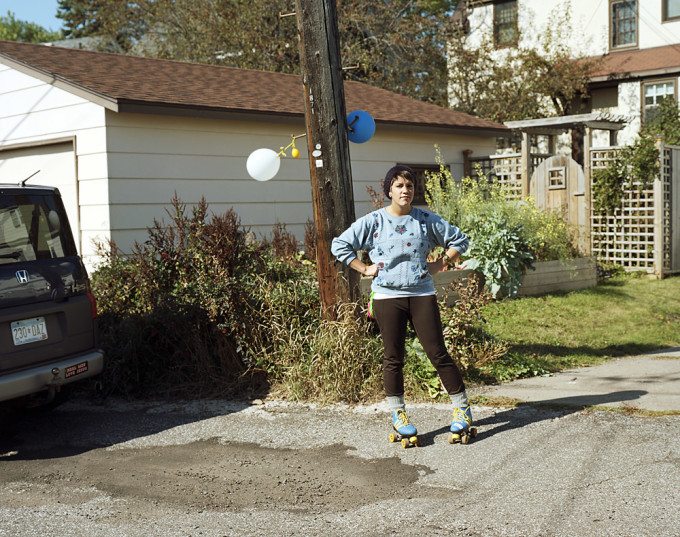 One day in 2012 I went to a thrift store and found a complete JOBO processor for about $30. I picked up some color chemicals and starts trying to use it to process my 4×5 film. Coincidence #2) Nearly free access to cheap processing.

I took some of the early works I had done with the 4×5 to one of Tom Arndt’s F-stop group meetings in Minneapolis to get some critique on them from a bunch of strangers. The response was overwhelmingly positive. Chatting with another photographer who was there I mentioned that I also had a junky old 8×10 camera. He mentioned that he had some expired 8×10 color film I could have. We met up early the next morning before I had to leave the city and picked up the film. Coincidence #3) The friendly donation of free film. Everything had fallen into place to try out some color film in the Korona at almost zero cost. I put out a casual inquiry on social media as to if anyone had a modern lens I could borrow and got a response from someone I knew. Picked up the lens and did the first test exposures.

Now, while the 4×5 creates perfectly awesome images that I can’t really fault in any way. It was obvious from the first print I made that the larger camera was all that and the can of nitro to kick it up a notch. Immediately was hooked. Bought the lens I had borrowed, as much expired film as I could find, and a camera in better shape that offered more lens movements.

Phoblographer: How did you go about creating portraits that actually made you feel something? Was there storyboarding or ideas put into it all? Kip: Not really any story boarding. I liked to approach each portrait with the same sense of discovery and unpredictability that I’d feel during a street photography session. I’d spend some time with the subjects in what ever environment they invited me into to get a feel of how they interact with it and use that as inspiration as to how I’d compose the scene. So still much like how I’d do street photography if I were invisible. But instead of just observing and candidly striking at the appropriate moment I’d have to offer up some direction toward where I’d like them to be. I quickly came to realize that during the length process of getting the camera set up, composed and focuses is often long enough for the subject to let their guard down. Their initial “smile and take my pictures” instinct melts away and the relax and become themselves again.

This is a key period in the process where I had to keep one eye on the subject while keeping the other on getting all the camera settings correct. Eventually they all seem to find their own pose that I immediately know is the right one to photograph. Spotting it and being able to bring them back to it when it is time to make the exposure is key to making what I think is an honest portrait. There were even a few times where I’d pretend that I was still fiddling with the camera, but was really just watching them on the ground glass waiting for them to fall into their spot. It is almost a weird sense of voyeurism as I’m staring them right in the eyes watching every motion from ten feet away and they can’t tell that I’m actually doing so.