While the world is all amazed with 50MP full frame sensors and a bajillion autofocus points, you may be pleasantly surprised by some technologies that years ago were absolutely incredible and in some ways should be brought back to the world. We’re not talking about putting 1080p HD video into a DSLR, but instead we’re going back much further into time. Plus, we’re exploring how the focusing systems would work in today’s world.

Years ago, Polaroid cameras received autofocus technology by using sonar. It was an incredible way of focusing that theoretically can even outdo modern autofocus technology in some ways. It worked in the same way that echolocation works for whales, bats and dolphins. The camera sent out a beam of sonar that human ears couldn’t hear and then when it hit the subject it bounced back and told the camera how far away the subject was. Then the lens autofocused to that spot and the camera snapped the photo.

The cool thing about this technology is that it ignored heavy contrast, backlighting or other anomalies and it simply required you to point the sonar in the right place.

The technology, as awesome as it was, also was flawed in that if you were focusing on a subject behind glass, the camera would instead focus on the glass because it focused on the first thing that it hit. If the technology continued to evolve, it would have allowed for Sonar to hit only specific parts of the scene and maybe even switch to contrast detection to see the differences in an area. 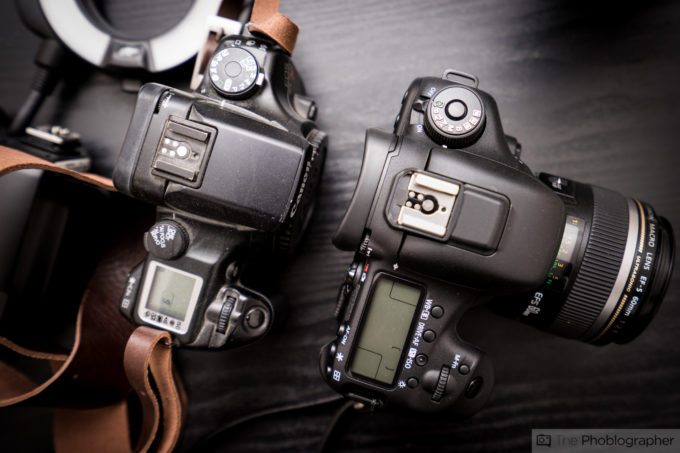 How cool would it be if you could simply just look to a scene and the camera would focus on the scene or subject in the same way that your eyes do? That’s essentially what Canon did years ago with their Eye-Focusing technology. It was a system that needed calibration and also had flaws, but still is incredible to think about even today. The eye focusing system didn’t focus on someone’s eyes, but it could. The user peered through the viewfinder and then specifically looked at a focusing point. The camera recorded this info and then focused the lens on that point.

Sounds pretty incredible, right? Especially when you consider how far autofocus technology has come these days. The major problem though has to do with the fact that it wasn’t always accurate, needed precise calibration to make it work flawlessly, and it wasn’t so friendly to those of us that society would otherwise call four eyes.

Still, if Canon continued to work on and improve the technology, it would have been massively successful. The single best light meter every put into a camera was years and years ago–and it was in the Olympus OM4 Ti SLR. Many cameras base their exposure off of an overall evaluation, the center or a single spot based on what the settings are. In general it does a pretty good job, but light metering can get even smarter and better when you really get into it.

So what made the OM4 Ti so darn good? It had an evaluative spot metering technique. The user would use spot metering and tell the camera to take a reading of the shadows. The camera would record that and then the user would move the spot over to the highlights. After the camera recorded that info, it would figure out a proper middle point for you. This worked very well for landscapes and portrait photographers that had the time to set it up. Essentially, the system was for slow, methodical work–but it could also use normal metering methods.

If Olympus kept using this metering technology, then the whole HDR world would have been changed. Sadly, they didn’t continue with it.