All images by Evan Thompson. Used with permission.

Underneath San Francisco is a network of old tunnels that very few photographers explore; but Photographer Evan Thompson has recently shared his photos of these very little known places with the world. He tells us that they’re still mostly a secret and that most folks keep it to themselves so as not to give away the secrets. He was inspired by the recent wave of photographers that love to go urban exploring and to places where no one else goes to.

We talked to Evan about the dangers of something like this and his creative vision in the network. Evan: Growing up I would take as many chances to borrow my dad’s camera as I could growing up. Whether I had permission or not! (sorry pop).

Phoblographer: What made you get into urban exploring?

Evan: Alongside the tech industry and boom of social media along came a new wave of photographers. It seems in some cites that there is nothing left to be seen. Or at least that’s how I felt. I wanted to see something new, or something that the average person couldn’t waltz into.

Phoblographer: What first made you say to yourself that you want to go around and shoot photos of the underground tunnels? Evan: I needed inspiration, time to think. It’s relaxing to me, it’s time to myself. The hunt is half the fun and thats what I enjoy most about it.

Phoblographer: What are some of the biggest lessons that you’ve learned while doing this type of photography?

Evan: Keep to yourself. These tunnels have been kept secret (for the most part) for a long time, and you do not want to be the one who ruins that.

Phoblographer: Tell us about a scary moment that you’ve had during the urban exploration of the tunnels underground. Evan: I’ve been super lucky. Actually, I’ve been pretty lucky my whole life in terms of making it out okay. Looking back on one tunnel, they recently had a gas main leak and they sealed it up. One that I had been in just a week prior. To think cement or something could seal off your only way out is fucking terrifying.

Phoblographer: What areas do you personally really like exploring and seeing?

Evan: My favorite recently is finding things that have been explored for a long period of time. One of the last places I visited had a new entrance torn in, and previously hadn’t been entered since the 90s.

Phoblographer: It also looks like you do light paintings in the tunnels. What inspires you to create the light trails that you do? Evan: I think it’s a much more uhh; fun way to light these tunnels. I don’t know how many times I see people go to the raddest underground tunnels and they fire a flash straight down the middle.

Phoblographer: How do you pack for these things?

Evan: I’m a rare case I think. I pack very light. Tripod, Camera, flashlight. No backpack, nothing. I don’t want to be weighed down if push comes to shove. But I’ve got plans for future locations that will obviously require more equipment! 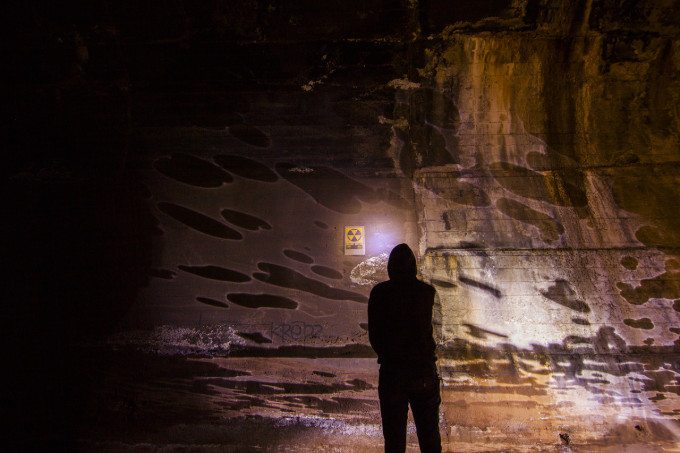