The Nikon D5500 clearly shows off the company’s continued evolution of their more entry level offerings–to the point where it pretty much seems to be targeting the mirrorless camera market. It’s small; in fact during our initial meeting with Nikon we found it to be comparable to the full frame mirrorless Sony A7 camera. And while it’s small, Nikon is still trying to do things that don’t sacrifice on build quality, feel, and features.

Yes, these are all very cool features for an entry level DSLR (or a step above it.) But they’re still not our favorite thing about this camera. The Nikon D5500 is the company’s latest offering for the photographer who wants something just a bit better than the D3000 series of cameras. And for the most part, they’re doing a great job with separation. We start our D5500 tour at the front of the camera. It is nearly devoid of controls here and there is almost no way that we can show you just how deep this grip goes; but know that it’s pretty darn deep even for those of us with larger paws. The top of the Nikon D5500 is characterized by a couple of controls. You’ve got your standard hot shoe, mode dial, on/off switch, shutter release, video record button, exposure change button, and live view switch right around the mode dial. There is also a pop-up flash. The back of the camera is characterized by a large LCD screen. In fact, most of the back is this screen. Otherwise, you’ve got the viewfinder, menu button, info button, AE-Lock, playback, directional control for choosing focusing points, etc. The back of the camera works well in conjunction with the front grip that overall gives you a solid feel. 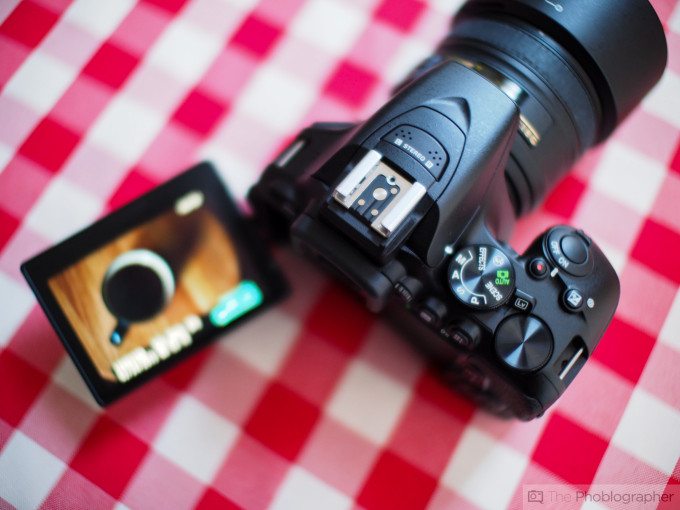 The LCD screen flips and rotates. It’s also touch capable and can sometimes be fun to work with. For the most part, we ignored it. The side of the camera is where you’ll find your connectivity options in addition to drive mode and other controls like a custom function to change the ISO setting, pop the flash up, etc.

Though I’m personally all for smaller grips on a camera due to the way they tend to feel like a more retro offering, the grip on the Nikon D5500 has to be one of the best that I’ve felt. It started with the Olympus EM1, and now the D5500 has one. Deep grips almost negate the need for a strap and make the camera much easier to hold. It doesn’t need to feel beefy, but really nice.

Otherwise, the camera is very much like the old D5100 that I used to own. The controls are mostly in the same places and working with the camera feels very familiar. Even if you’re not a Nikon user, it’s easy to get used to using the camera.

The camera is best suited to folks who shoot in aperture priority, shutter priority, or program mode due to the lack of dual dial controls. Want to shoot in manual? It won’t be hard, you’ll just need to include another step. But the inclusion of the touchscreen makes things even more interesting as you sometimes don’t even need to use the dial at all to manipulate the settings.

We’re testing the camera with Nikon 50mm f1.8 G: which we feel is the best lens to test pretty much any camera with due to how popular the lens is while offering great image quality. We’ve found that the focusing struggles a bit in low light situations, but it’s not a deal breaker at all. Otherwise, the focusing seems to be perfectly on point and you’ll have no problems with reliability issues. EXIF DATA IS INTACT; SIMPLY CLICK THE IMAGE AND YOU’LL SEE THE DATA IN THE URL/FILENAME

So far, we’ve been only able to work with the JPEGs. Overall, we feel that if you’re the type to only shoot JPEGs then you’ll have nothing to complain about. Even if you wanted to do some minor edits to the JPEGs you won’t have a problem. But if you’re buying a camera like this, please shoot in RAW. We’re positive that the RAW files will give you so much more versatility. Here are some of our favorites so far. The camera is doing very little to let us down when we consider the market segment that it is aimed at. There isn’t a single reason why you may not want one as the images are top notch, the focusing seems better than the older D7000 models, and it’s got a great size that would even make me consider not looking at similar sized mirrorless camera options.

However, we’ve got quite a bit of testing to do with the camera still.