All images by Jaroslav Wieczorkiewicz. Used with permission.

Photographer Jaroslav Wieczorkiewicz is no stranger to the Phoblographer. He runs Aurumlight, and after we featured his Milky Pinups (NSFW) and they made the rounds on the internet, FairLife Milk purchased the images for an advertising campaign. But now, Jaroslav is out with a new project called splash heroes. The photos are being made into a new 2015 calendar that he has recently told the public about.

Jaroslav’s creations are both technical and creative masterpieces that require lots of work and can get very, very messy. His Milky Pinups required lots of calculations, exact placement of milk being thrown at a subject, precise timing of the camera/flash trigger, and lots of post-production. Splash Heroes builds on this concept but pays homage to many strong female heroes in the comics.

Mr. Wieczorkiewicz told us about the project before its announcement, and of course it whet our appetite for more.

You should also know that he plans to bring a workshop on this type of photography to the United States.

Phoblographer:  Where did the inspiration for this series come from? Your previous one was with pinups, and this one takes on super heroes. 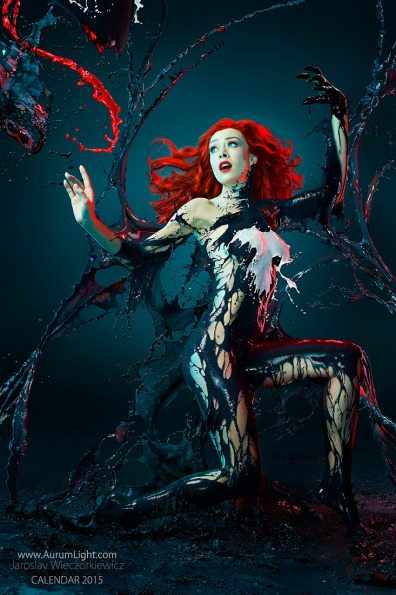 Jaroslav: This time we wanted to make a very relaxed and colourful series…simply, something really cool!

Since the Milky Bamboo Forest Fight Shoot we knew we wanted to come back to that idea and explore colours in liquids in-depth! We often hear from people that if you have a great idea you should try to get celebrities on set to make it really special…I remembered that advice soon after the Bamboo Forest shoot when I was giving a seminar in California. Afterwards we met with our producer actor friends in Hollywood and we were visiting their place, we entered a special room with a great display wall full of fantastic action figures.

When he was showing them to us, I saw what passion he had and in that instant moment it was clear to me what we would do for our next project.

And as you probably know, you don’t need celebrities in your work–go for concepts that people are passionate about including those well known!

So this year’s calendar is our personal tribute and a milky parody of the heroes genre!

Phoblographer: Talk to us about the gear you used to create these photos.

Jaroslav: Fast duration flash lights are essential when working with liquids. During the shoot we were using up to eight and on occasion nine heads. Paul C Buff Einstein E640 to be specific–I have a good bunch of them.

Solid sturdy tripod is a must – I use Manfrotto platform system build from Gitzo Giant legs, Manfrotto crossbar with laptop plate and the Manfrotto 405 geared head on another end. That is my favourite setup!

The rest depends on the concepts, I use a mix of softboxes, standard reflectors and Lastolite panels and ROSCO colour filters.

Phoblographer: How did you go about getting the wings in the image that pays homage to Storm from X-Men? Jaroslav: I always say that these shoots are like a cross between Jamie Oliver’s cooking show and Dexter TV series.

First you have to plan for your location by having a special room, wrap it in plastic and when you have model in place you taking out all your kitchen tools and stuff like cups, pots, tupperware etc. and begin mixing milk with food coloriser for the right effect and testing the splashes.

A lot of testing for the right shapes.

Phoblographer: Your previous series was purchased by Fairlife milk, have any other companies approached you about doing something similar for them?

Jaroslav: Milky Pinups Series is a great example on how something that started as a personal project, became a dream assignment. I couldn’t have been happier about it!

Yes, we are in contact with a few interesting clients, on various stages and concept development. I do hope that we will make a few of them happen. But it is early stage and I cannot really talk about it yet.

We are working hard to make an unusual concepts happen and want to project that profile to our potential clients. In a few years when someone will think about an assignments with dynamic liquids, we want them instantly to think – AurumLight!

Phoblographer: How messy does it get when working with the models to do stuff like this?

But we have done that so many times that we know how to look after the team and space and contain the liquid in a safely manner.
Saying that, it does require a specific space and especially floor material. When we travel to other countries we make sure that all the boxes are ticked on the list to make our life a bit easier on the day. Phoblographer: How much work (in terms of time) goes into a single image? (concept, shooting, post-production) Jaroslav:  2015 SPLASH HEROES series was photographed over 5 intensive shooting days. So it will give you around 2 to 3 complex concepts in a 8h working day. That includes a prep work and cleaning after the shoot.

Concept work is completely different – it is a little bit like writing a song for a musician. You can came up with a whole series in a few minutes and on other occasions you have one great sketch and few months later you coming up with another. I have folders with sketches that are still half empty or if you like half full!

Postproduction is tricky and depends not only on how complex the final illustration is going to be, but also is it my personal work or assignment for a client. When you need to deal with revisions from an art director sometimes it is difficult to estimate will it be a two days or a week.

When the piece is mine I don’t rush things. I like to work on it for a while and then leave it for a couple of weeks and look at it from a different angle. It helps me to distance myself from the work.

Phoblographer: What will your next series be?

Jaroslav: Believe me or not, but I’ve just finished a storyboard for a calendar… for 2018. But I will keep it a secret just in case I will change my mind. HOW TO ORDER CALENDAR / PRICE: The Calendar can be ordered directly via email – info@AurumLight.com

A Limited edition – all Calendars are numbered and signed!

…and a single copy costs the same as last year £39.99 + Shipping cost anywhere in the world.