There is a lens that I miss dearly. It was a Tamron 28-105mm f2.8. It was destroyed in an accident during an event shoot. Not too long after that, Sigma announced their 24-105mm f4 and my interest was captured. This new lens basically mixed in one of my favorite focal lengths, 24mm, with one of my favorite zooms.

For a while now, Sigma has been putting out high quality lenses in an effort to up their game. Our Sigma prime lens guide is filled with drool-worthy lenses. Sigma knows there are people who love zooms and they have produced proper lenses for these them as well. The first thing I said when I got it in my hand was please don’t  let the Sigma 24-105mm f4 be a disappointment.

– This lens is ultra sharp.

– The Sigma 24-105mm f4 is an extremely good lens for event photography.

– This lens is practical for use in almost any situation.

– You have to pay attention to how you put on the lens hood or it will pop off.

– Image Stabilization gets weird on a tripod.

I tested the Sigma 24-105mm f4 with a Canon 5D MkII, a simple set up. I used my Magnesit Copter Mini Tripod to stabilize the camera for video testing and a Think Tank Urban Disguise 60 for carrying it all about 90% of the time . The Sigma 24-105mm f4 has two switches: the Autofocus AF- MF switch and the Optical Stabilization switch was right underneath. If you put this lens on a tripod you have to turn this off. The OS does not work well on a tripod and it’s not meant to. This was barely used. It was easy to reach when it was needed. I kept this lens in autofocus most of the time. The distance scale on the top of lens is clearly marked, but honestly, I barely used it. The zoom ring is bigger than the manual focus ring, and I used it a lot more. Both rings move smoothly. The Sigma 24-105mm f4 has no lens creep whatsoever. The front element would stay just where I left it. The front element is the biggest part of the lens and a lot of the lenses weight resides there. When the lens is at 24mm, it is a decent size, not big at all. This makes it easy to carry in any bag. The Sigma 24-105mm f4 extends to a decent size, but not too big. When shooting at 105mm the lens is not evasive. You are also most likely shooting at a distance. The Sigma 24-105mm f4 comes with a petal shaped hood that works well at deflecting unwanted light. It also works well at protecting the lens in crowds. You have less of a chance of grime getting on the lens with the hood on. The mount is made of brass and is strong and sturdy. When mounting this lens the camera, it goes on smooth and fits tightly. The Sigma 24-105mm f4 is extremely well-built. It almost feels like a Zeiss lens. It does have some weight to it. It’s not as heavy as my old Tamron 28-105mm f2.8. After about two hours of straight shooting, however, you will feel its weight. The lens is also a decent size. There is no lens creep though, so you can walk around at 24mm and the lens will stay that way. The Sigma 14-10mm f4 is extremely easy to use. No thought had to go into using it at first. The most important thing to remember about the Sigma 24-105mm f4 is to turn off the OS when putting the lens on the tripod or the image will be ruined.

Most time I work with this lens hand-held. There is no need to keep it on a tripod. The autofocus is extremely quick throughout the entire range of the lens. You lock onto your subject and focus right away. I was working at an event and my wranglers, as I call them, were coming up to requesting specific shots. Some were wide-angle shots of the entire space, while others were of specific people. I would lock on to my subject, get the shot, and quickly move on. If you felt the need to focus manually, the focus ring was a decent size and easy to grab. The image stabilization on this lens work wonders. It really came in handy when I had to shoot impromptu video with the Sigma 24-105mm f4. At one point it took me getting bumped by a passer-by to really shake my hand-held video. Moving quickly in and out of situations image stabilization comes in handy as well. If gives you a little more confidence that your image will be sharp.

It is nice that the Sigma 24-105mm f4 is not complex. There is no learning curve to this lens. You can take it out of the box and start working with it right away. It zooms easily and the two buttons are easy to manage. The only thing you have to know is to turn off the Image stabilization when using a tripod. Overall the image quality of this lens is fantastic. I was extremely comfortable showing images unedited. This is important for event photography and/or photojournalism when you sometimes have to give up images right away. The Bokeh was nice and smooth in all the right places. If you have to shoot a quit portrait or isolate a subject this lens is more than capable. Don’t let the f4 fool you, bokeh with this lens is good. Having to shoot quick portraits of people as they were speaking, I was able to isolate them from their environment easily. 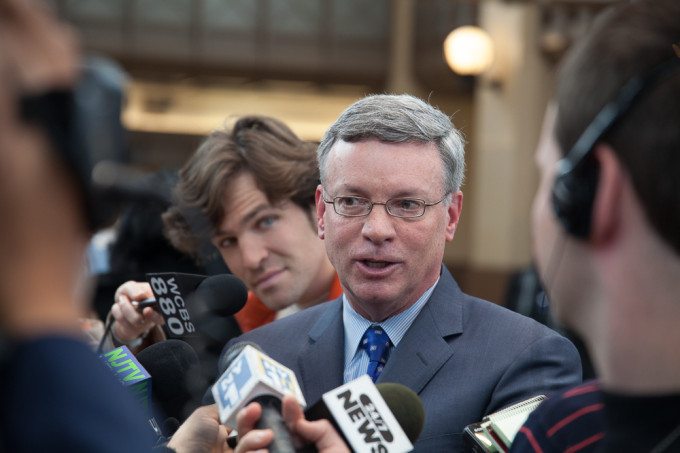 This lens needs to be sharp and it is. At a press event, where sometimes you only have one opportunity for a shot, sharpness is key. This lens never let me down in that area. In my time with the Sigma 24-105mm f4, I noticed little to no color fringing. I had this lens in almost every situation I could imagine it in. When I cropped the images they were fine. If I could only have one lens with me, this would be it. This lens.The Sigma 24-105mm f4. I emerged from testing this lens thinking this just may be the most well-rounded, practical lens I have ever used. It’s not about glitz or glamour. The Sigma 24-105mm f4 is about getting the shot.  This lens is really good. It is civilized and can be put to work everywhere. Sigma put a lot of thought into this lens and it’s appreciated.

The Sigma 24-105mm f4 deserves the Phoblographer’s Editor’s Choice award. I can see myself just leaving this lens on my camera. The Sigma’s 24-105mm f4 is extremely versatile and can be used in almost any situation. A Black Rapid Strap like the Yeti will take some of the pressure off allowing you shoot much longer with this lens. You may want to think about having a ND Filter like the LightCraft Workshop DigiPro HD for impromptu long exposure photography.