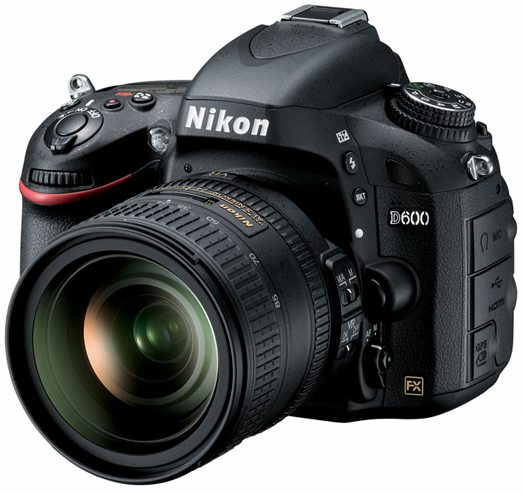 First off you guys want to know the price. Amazon and B&H have the body only for around the same price (With B&H being a bit more expensive) for around $2,096. Or you can get it with a lens from Amazon or B&H for $2,696 approximately. And can be pre-ordered!

And now the news: holy crap Batman! Nikon did it! They’ve announced the feature packed D600 DSLR: the world’s first entry level full frame DSLR. All the specs that you care about are after the jump.

Taken from the B&H Photo Video listing of the camera. The camera can also deliver photos via Wifi with the WU-1b attachment. Oh, and there’s a new Nikon 1 lens. To be honest, this is what every consumer has wanted. And in a way, that’s what I’m afraid of. While I fully believe that it is the photographer that creates the images and that creative vision in the end will win the day; everyone, their mother, and Uncle Bob all think that they’re already a photographer. This camera can potentially add even more saturation to an already super saturated market.

Granted, those who go for the high end wedding photographers (just as an example) will still go for the high end, but this will make it even tougher for those that still want to get into the market. In a way, I feel that full frame isn’t just for professionals anymore and because of this, I predict that in maybe two to three years we’re going to start to see another shift in the photo industry.

We may indeed start to see things go backwards a bit: meaning that with full frame coming down to the masses, we may start to see medium format do the same. Wedding, portrait, and event photographers used to shoot with Medium Format all the time until digital came around and ate it up. I personally have stopped shooting 35mm film because of just how good my 5D Mk II is. I shoot 120 film and 3 x 4 Instant as well. And while the price may still be high for some, I still believe that we’re going to start to see another shift in the market. We already started to see it with premium mirrorless cameras and large sensor compacts (like wedding photographers and photojournalists picking up the X100 and X Pro 1 as second bodies.)

It’s going to be interesting to see how this plays out. But to be honest, it’s starting to feel a little cramped in here with all the people just shooting in Auto mode.