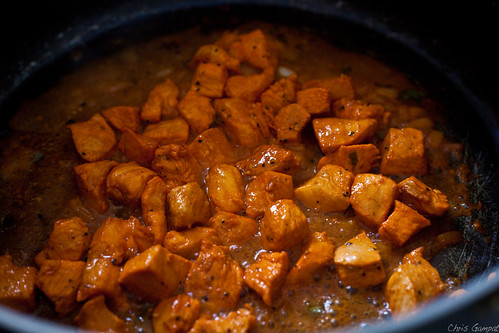 Continuing my work to improve my food photography, I bring you Tandoori Chicken.

This was shot while my sister and I were cooking (I was cooking stove top Ziti alongside) with my 5D Mk II and 50mm F1.8 II at F4. Little to no work was done in photoshop.

Just think about how much we take this for granted these days. We literally just threw the mix in there with the chicken after we cleaned it. But seriously, getting that recipe possibly took thousands of years of work. Someone had to try it first and realized it was terrible so they went back to the drawing board to improve it. Then someone else said that they can make it better. And the process continued. It’s taken thousands and thousands of years of traditional recipes and modifying those traditional recipes to bring it to this point.

And it’s all in just a little packet that you can pick up in Jackson Heights, Queens.