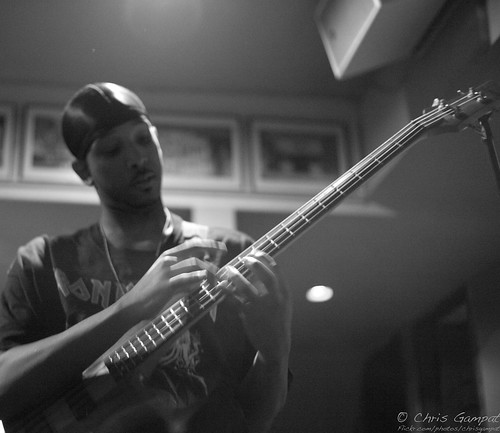 Every Monday from now on I will do some sort of posting relating to music/concert photography in celebration of the popular Twitter trend topic. For this first installment, I’ll be talking a little bit about what gear I use to photograph some of the bands and artists I’ve shot. You can view extra work on my flickr’s concert set if you’d like. Now, onto the gear.

Dahlia, as I’ve affectionately named her, is my primary body for shooting concerts. The 5D Mk II delivers remarkable photos at high ISOs like 3200 and 6400: something that is essential to shooting concerts. Auto focusing is very dependable depending on which lens you are using and the button layout allows you to change your settings without having your eye leave the viewfinder.

An extra bonus for the Mk II is the added video recording capabilities. The video you get from this DSLR is loads better than what you can expect with prosumer level camcorders in the same price range. Add onto that the fact that you can add an external mic and switch out lenses and you have a product that really can’t go wrong.

Most musicians want their photos and videos on the web. The 30p video mode is perfect for that as well as the sRAW files at approximately 9MP and 5MP.

This lens, for the money is well worth it. The image quality this is possibly with a lens like this coming in at under $100 provides for a really sweet deal. I do plan on upgrading to the 50mm F1.4 though as I’ve developed a love/hate relationship with this lens. My copy is sometimes unreliable in terms of sharpness. In fact, it’s notorious for being really soft wide open. The softness can be good for portraits in way. However, if you stop this lens down to F2.8 is becomes very sharp and peaks off at F4.

There is no USM for this lens, so you’re either going to have to rely totally on its auto focusing capabilities (which aren’t great) or just manually focus with it.

As a Blind Photographer, focusing manually in low light isn’t totally cutting it for me these days. That’s why I’m going with the F1.4 soon.

I have yet to really use this lens, but I see it being essential for singling out certain members of a band or music group. It’s also quite sharp wide open and has USM which means that I’ll be able to work well with it. Composition of the images will have to be done very carefully as the focal length is a short tele-photo and you don’t want to bang into anyone in the crowd.

This lens deserves a lot more credit than people give it. The mainstay of many Canon concert photographers is the 24-70mm F2.8 L. While that does allow for better shooting in low light, the added capabilities of image stabilization has secured this lens in my messenger bag. The versatility allowed with this lens combined with the image quality makes it very much worth it.

Despite the fact that this lens isn’t as sharp as the others previously named (including the 24-70) the versatility that this lens allows cannot be denied: whether it’s for videos or photos.

This item is on my essentials for DSLR videography and it is also essential at concerts. The fact that more musicians are asking for both great stills and videos means that we as photographers should be able to meet their needs. The VideoMic allows great recording of sound. As a pointer, you should probably move back from the stage as the sound can be too loud and sound very harsh upon playback. Moving back means that you should also possibly get a nice zoom lens. In this case, the Canon 24-105mm F4 L IS is perfect.

This list isn’t the be all end all for Canon users. In fact, great stills can be taken with a Rebel providing it is coupled with the right lenses. Let us know what you use to shoot concerts in the comments below.