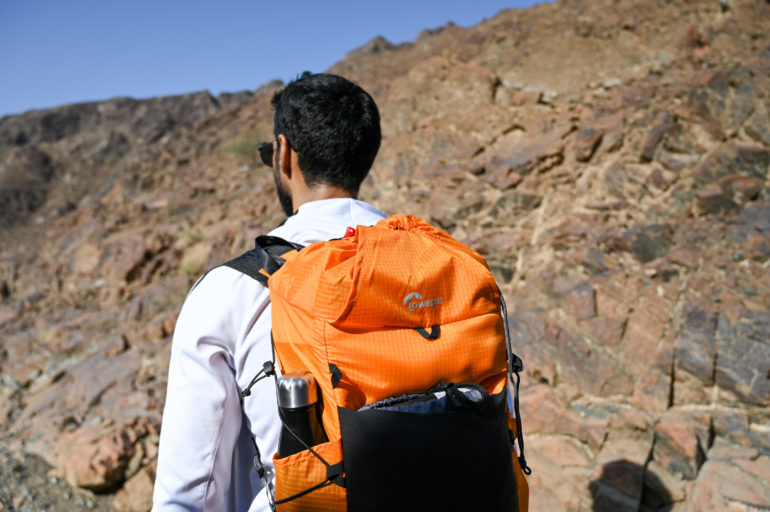 When the package from Lowepro arrived at my home, I was surprised by the size of the rolled-up backpack. It crumples down to about the size of an extra-large burrito or rolled up bath towel. At just over 400 grams, the Lowepro RunAbout BP 18L won’t weigh you down when you’re on a hike. And for those who are conscious of how earth-friendly a company is, this bag is made of 84% recycled fabric. It’s made to easily hold the Lowepro GearUp series of camera inserts. But how good is it for those who don’t own any of these?

It’s ultra-lightweight for a backpack, and it can be easily rolled up and tucked into any storage area without much hassle. Without a padded camera insert, especially one from the Lowepro GearUp series, you can’t simply toss your camera gear inside and expect it to feel comfortable on your back. Best to throw in some thick articles of clothing which can transform into the inner lining of the backpack (as it lacks any padding inside). It’s got a decent number of outside and inside pockets, but what disappointed me were the shoulder straps. I loaded the Lowepro RunAbout BP 18L with only 6kg of gear and clothing in total. The straps were painfully cutting into my shoulders about halfway through a 5km hike.

This one seems more suited for quicker hikes with lighter gear. If you tend to carry a lot of gear on your hikes, I would recommend the Lowepro PhotoSport BP AW III.

Photography bags and backpacks often tend to use recycled materials inside them, but I’ve never heard of one being made with about 84% of recycled material. Top marks to Lowepro for doing this.

I tested the Lowepro RunAbout BP 18L using the below gear (weighing around 6kg in total).

As seen on the webpage for the Lowepro RunAbout BP 18L

I often carry a lot more weight on my shoulders with regular backpacks, and while I wasn’t expecting the same comfort with the Lowepro RunAbout BP 18L, I didn’t think the straps would be weighing down this much. Despite tightening the straps to position the backpack higher up on our model’s shoulders, they continued weighing down heavily on him. Croydon is someone who hikes often, works out regularly, and plays football every weekend; I wasn’t expecting him to feel this knackered at the end of our hike with this backpack. The constant pressure of the straps on his shoulders left him sore for a while after a three hour hike.

The Lowepro RunAbout BP 18L would undoubtedly be better when paired with their GearUp series of camera bag inserts, but since we didn’t have any of these, we had to DIY the padding for our camera gear.

The sternum strap is slim but comes in handy when you need that extra bit of rigidity to the backpack setup.

Thankfully, the waist strap isn’t as thin as the sternum strap. The slender Croydon had to tighten it a fair amount to prevent the base of the bag from shifting as he walked about the rocky valleys.

There are numerous loops around the bag, which come in handy when carrying things such as water bottles or anything that you can get a carabiner onto. We didn’t use many of them during our hike, but it sure helps to have them, especially if you want to shift weight around during the course of the hike.

Pockets on either side of the Lowepro RunAbout BP 18L ensured we had enough fluids to stay hydrated during our hike. When we went on a much longer walk last time this year, we dangerously underestimated the amount of water we had. We ended up consuming it all halfway through the hike. Luckily it was winter, and despite the harsh sun beating down on us as we snaked through the valleys, we made it back to camp safely.

This 0.5L bottle could have just as easily fit into the pocket on the right.

You could also work in a small or medium-sized tripod here, such as a Joby Gorillapod or a Sirui compact travel tripod, as seen in this image.

The only inner pocket was meant for smartphones and accessories, but we managed to stuff it with…

…accessories for Croydon’s coffee. I strongly feel that more pockets could have been added throughout the bag. Maybe they can’t be easily accessible while you’re hiking, but more pockets mean better organization, which is never a bad thing.

The terrain on our hike was anything but flat. We encountered a lot of jagged rocks that the Lowepro RunAbout BP 18L brushed against. At the end, the backpack had nothing more than a bit of dust on it: no scratches or tears at all. A quick wipe-down with a wet wipe cleaned the dust in no time.

Since we didn’t have any GearUp cases, we padded the inside of the bag as best possible to protect the camera gear while hiking. I wouldn’t say it was stuffed to the brim, but it seemed larger than the corresponding product images on the Lowepro page. The seams are well stitched; I had no doubts that I could have still stuffed more gear inside the backpack, and the seams would not have started unraveling.

With just 6kg worth of items inside, I definitely had not expected the straps to feel uncomfortable. This is the weakest aspect of the backpack and needs closer inspection for the next iteration of the unit. It might add a few grams of weight, but it would make the backpack better suited for longer hikes. I tried the backpack with a lighter load a few days later, and the straps were cutting into my shoulders sharply as well.

Elastic side drawstrings to keep bottles and tripods in place are made of durable material.

Also, unlike the elastic side pouches that most backpacks these days come with, these side pockets are made of the same triple ripstop nylon as the rest of the bag. No chance of these expanding with usage over time. I have no complaints with the quality of the material used anywhere on the bag

I’m not sure I’d use the back zipper to get my gear out while using the Lowepro RunAbout BP 18L on a hike. This would probably be a lot easier for me to use the top drawstring and open the backpack at the top to take out any camera gear. The zip at the back was more useful when I wanted to open the backpack to load equipment, padding, and accessories inside.

I’d still put something soft over the camera, at the top of the backpack, in case of an accidental tumble or a fall due to missed footing. Or you could always just use a GearUp accessory bag.

There’s an extra ‘lock’ at the top, for added peace of mind.

The large open pocket at the front of the backpack was filled with a travel pillow.

Croydon forgot to take the pillow out of there while posing for this photo. It might have also had to do with the fact that we didn’t allow him to take a break due to the rising morning temperatures (closing in on 86 °F).

The bright orange made it easy to spot the backpack anywhere we went. I’m not sure if this was Lowepro’s intention with this choice of color, but it certainly could help.

I think I would have really enjoyed the addition of the same accessory kit on the PhotoSport BP 24L AW III, which could have let us hang a camera from the front of the straps. This would have also negated the need for a separate camera strap while hiking. However, I don’t see any such compatibility for the Lowepro RunAbout BP 18L, which makes me believe this is a hiking backpack first and a photography backpack second.

That’s a 15 inch MacBook Pro in the image. The Lowepro RunAbout BP 18L rolls up to a comfortably compact size.

I was pretty excited to review this backpack when it arrived. The weather was just right to head out for a hike and take pictures along the way. Unfortunately, my experience with the Lowepro RunAbout BP 18L wasn’t as exciting. It’s a decent bag for carrying a compact mirrorless camera, plus accessories and a jacket. Beyond that, anything larger or heavier would make for an uncomfortable hike soon after it begins. The recycled material usage is a great step in the right direction for future bags from Lowepro, but I hope they can add padded shoulder straps to the next model. I can’t recommend this for seasoned landscape photographers who’d undoubtedly carry multiple lenses, filters, and tripods on their outdoor expeditions. Comfort is key when using any backpack, especially for photography as it’s expected to be used for long periods of time.

I’m giving the Lowepro RunAbout BP 18L three out of five stars. Want one? Be sure to check out Amazon.