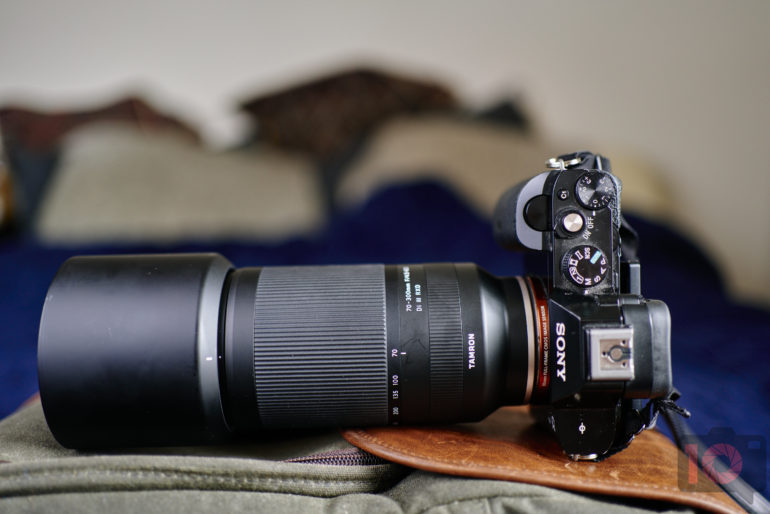 Tamron’s lenses are usually some of my favorites. Admittedly though, I lean a lot more towards their primes and their constant aperture zooms. But the Tamron 70-300mm f4.5-6.3 Di III RXD is a little bit of this and a little bit of that. The image quality could be better. But the reliability is fantastic. You’ll essentially be relying a lot on Sony’s fantastic image sensors to create stellar images. But no matter what, know that you can do them in pretty much any condition you throw at this lens.

We used the Sony a7r III with this lens.

Tech specs are taken from the summarizing on LensRentals.

The Tamron 70-300mm f4.5-6.3 Di III RXD is a pretty standard zoom for the Sony camera system. It’s designed to be one of the simplest lenses to use. And in many ways, it really is. The only control that matters on this lens is the zoom ring. That’s it. Said ring is also where you’ll place your hand most of the time.

The lens almost doubles in size when it’s fully zoomed in and has the lens hood on. But if you’re photographing birds, then you’ll be fine. You’ll more or less be far enough. If you put this lens on an APS-C camera, you’ll be in even better shape.

The front of this lens also has a small 62mm filter. Indeed, this is a compact lens. With enough room, you can put it in a camera bag while attached to a camera.

At the rear is the manual focus ring. But I really doubt anyone will ever use it. I didn’t.

The Tamron 70-300mm f4.5-6.3 Di III RXD is said to be weather sealed. Indeed, we took it out once or twice in the rain. However, it’s a tough lens to use in the rain since it tends to be darker.

Weather sealing aside, this lens is incredibly lightweight. Tamron has been doing this for a long time, and they need to be commended for it. They’re a company that really understands mirrorless cameras. They were originally designed to be smaller and lightweight. This lens adheres to that concept.

The Tamron 70-300mm f4.5-6.3 Di III RXD has no real controls on the lens. The only big one is the zoom ring. So you’re basically just zooming in and out. Some would wonder if it should have a focus limiter. And at times, I really thought that it should. However, I don’t think I lost that many shots with this lens.

What’s more, this lens should have a zoom lock. That helps keep it a bit more compact when it’s stored away. But I’m nitpicking here a bit.

When photographing birds, use the large tracking focus setting with continuous AF. You’re much better off setting the focusing point yourself unless you have a clear shot at a bird feeder or something.

I tried this lens mostly with the Sony a7r III. But I also used it a bit with the original Sony a7. The autofocus is pretty comparable to one another. But overall, the focus with this lens is accurate, fast, and reliable. I nailed pretty much 92% of the shots. Any time I missed the shot, I’d blame Sony. Trying to find birds in the trees can sometimes be a bit tough for the Sony a7r III. It’s even tougher with leaves and branches in the way.

This lens has a lot going for it. It’s sharp, but I’ve seen sharper for sure and it doesn’t outdo lenses at a higher price point the way their f2.8 constant aperture zooms do. The colors are sort of muted, but that isn’t the end of the world. The coolest thing about this lens, though, is the bokeh. It’s super creamy and, at times, looks like a vintage lens.

This lens exhibits beautiful bokeh. If you’re using it to photograph birds on your porch, you’ll have lots of fun. It’s going to do a terrific job singling out the birds and blowing the rest of the scene out into glorious bokeh. At times it will also look like there’s a swirl or extra smooth bokeh.

In our tests, we found a very tiny bit of purple fringing, but you’ll only see it if you’re pixel peeping. When the profile for this lens becomes available, I’m sure it will be gone. I’m not worried either way.

The color from this lens is overall pretty nice. It’s muted, which is different for a Tamron lens. I’m used to much more vibrant colors from them, but I’m alright with that. Realistically speaking, Sony’s sensors are very capable when it comes to color. However, I really wish this lens was made for the Fujifilm X mount. Pairing this lens with Fujifilm’s Classic Chrome render would be a dream. Otherwise, it’s probably going to do a lot better on Sony’s APS-C cameras.

Sharpness is where the Tamron 70-300mm f4.5-6.3 Di III RXD is strong but not as strong as some of their other lenses. So in that regard, I found the sharpness to be lacking a bit here. To clarify, it isn’t bad. But I’ve surely seen sharper lenses from Tamron at incredibly low price points. And when you tie this in with the more vintage look I get from it, it actually makes sense. You sacrifice a bit for a specific look.

Could the Tamron 70-300mm f4.5-6.3 Di III RXD be sharper? Yes. Could it have gotten rid of purple fringing? Sure. Could it have also had more vivid colors? Totally. However, it’s got a sort of retro look to it. But on the flip side, it didn’t have to have weather sealing, be incredibly lightweight, or even focus that quickly. But it does. Here’s the thing, though: I don’t necessarily know which Sony a7 series camera this lens would be best paired with. I think that for birding you need the higher megapixels for sure, but I’ve seen sharper lenses. Maybe the Sony a7 III is the true spirit animal for this lens. But even so, I’m a bit lukewarm on it.