Jaroslav Wieczorkiewicz is back with a special edition of his Splash Heroes.

London-based Jaroslav Wieczorkiewicz has always been on our radar for his unique and innovative splash portraits, beginning with the Milky Pinups project. He recently released the latest version of the Splash Heroes series, aptly titled The VILLAINS Edition. So, we asked him to tell us more about the newest iteration of his fan-favorite series; the inspirations, motivations behind it, the creative process, and the challenges everything entailed. If you’re a fan of comic book characters and out of the box creative projects, we’re sure you’ll enjoy our latest interview with Jaroslav. Phoblographer: This year, you decided to do Splash Villains. Why? Did you just want to try something different?

Jaroslav Wieczorkiewicz: There is something that fascinates us about villains. It is probably the fact that, among other things, they simply cause chaos and give things to do to Heroes. Without the first group, there wouldn’t be a need for the second — in our case, making the SplashHeroes five years ago was an action simply waiting for a reaction and it is happening this year!

Phoblographer: When it came to communicating the ideas of these villains to your models, how exactly did you do it? I can’t imagine this is particularly simple even though you’ve done this sort of project for years.

Jaroslav Wieczorkiewicz: Communicating any idea to a potential client, models or even your team is a certain skill that as a creative you have to develop the earliest stage of your career.

Like in most of my cases I do that through a series of sketches and conversations. I prefer to meet people face to face before the project, to get literally on the same page — of the sketch — and see is there an understanding.

The whole game is about winning people’s hearts and minds and if you can do that you are one step closer to a potential gig.

The interesting point is that models are generally very patient people and used to repetitions, many takes, studio surroundings, and a lot of people that run around them. But not necessary they are familiar with a cosplay concept or even the superheroes in general. So sometimes it is tricky to get them to be emotionally invested in the actual character they portray.

On the other hand, cosplayers not always are comfortable with the modeling part of the project where you are pretty much exposed to everything and everyone.

So the goal is to find someone in between these two worlds and you are good to go! 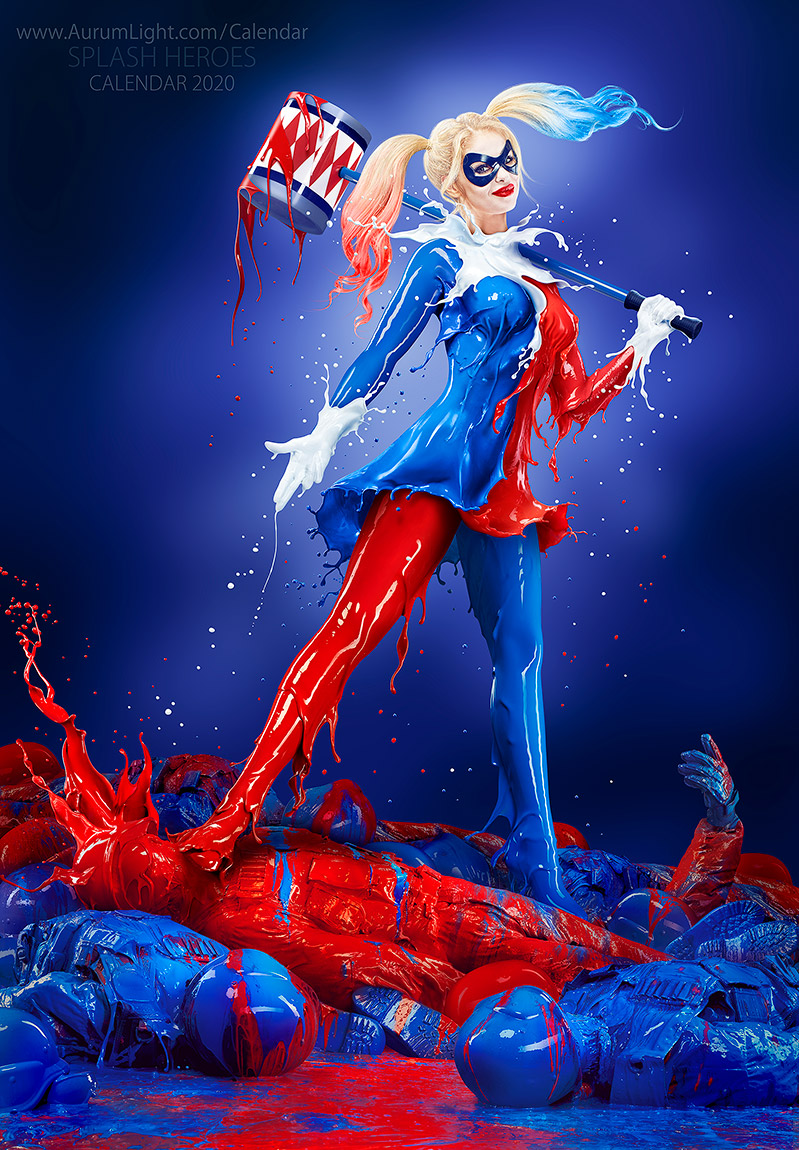 Phoblographer: You’ve done similar projects with men. And in Splash Villains, you’re highlighting Female Villains in the DC and the Marvel universe. Have you thought about doing this project with men? I would imagine Eddie Brock’s Venom or Carnage would make fantastic options for this series.

Jaroslav Wieczorkiewicz: I agree that we have an endless source of inspiration and characters from many different universes to work with. And yeah, all three would be cool to try to make with a man. But the SplashHeroes in original form was a fan-favorite series so I brought the female characters back.

It is nice to do experiments but eventually, I create for other people as much as for myself and in general the voice calling for female models out-weigh significantly the one calling for males…

Maybe in the future, I will run with the other one. Phoblographer: Something that has been very consistent in this series over the years is your processing and lighting to make the subjects appear like they’re from comics in the late 90s. Do you feel like those artists have rubbed off on you at all?

Jaroslav Wieczorkiewicz: Oh yes, very much so. If you look carefully you will notice many references,  especially to J. Scott Campbell who is one of my favorite artists on the scene!

I enjoy comic books and have a lot of respect for people that make them happen.

Phoblographer: What made you choose these villains? From my forays into the cosplay world, it’s sort of refreshing to see there isn’t a Poison Ivy, Catwoman, or Talia al Ghul in here. Of course, Black Cat sort of comes close to Catwoman, but she’s starkly different.

Jaroslav Wieczorkiewicz: Actually, it was quite a natural process — if you will run through the first SplashHeroes series you can find both of them, Poison Ivy and Cat Woman in there. Not all SplashHeroes were heroines exactly like not every lady from SplashVillains is vileness. So I selected a few more from the ones I enjoyed the most. Phoblographer: You’ve been using Nikon cameras and Einstein lights for a long time. How are they working for you? Are they still your mainstays for this series?

Jaroslav Wieczorkiewicz: Absolutely, all my gear stayed the same and runs smoothly for years now. I am not changing something that is taking me exactly where I want too.

Phoblographer: You’ve stuck with the theme of using a colored background for the most part. Have you ever thought about putting these creations of your in a comic location like Gotham City, the Savage Land, etc?

Jaroslav Wieczorkiewicz: I was deliberating on that some time ago but only for a moment. I work with liquids — and that is the theme and the most important element of the project — everything else would distract you from that idea.

So, keeping the background neutral was a conscious choice. Phoblographer: In years past, this series has required a lot of work, retouching, layering, etc. At this point, what parts have become more routine for you?

Jaroslav Wieczorkiewicz: In terms of technicalities, the process hasn’t changed much since day one. And all the stages can fall into patterns and routines. That actually helps and makes the work go smoothly as everyone involved did that many times before.

It doesn’t make the work easier though. You have to be focused all the time and every slip from your best game will hurt you when you will try to put these illustrations together in postproduction.

Phoblographer: Artistically speaking, what was the most difficult part of this for you?

Jaroslav Wieczorkiewicz: Justifying the time needed to put the whole thing together. Every single step takes time but all together can test your patience.

That is why I prefer to stretch the project in time and in this case the first shoot was done in May and the last in October 2019 during my Splash Workshops. That way you can leave it and come back with a fresh set of eyes a few weeks later. Phoblographer: I know this type of work has gotten you commissions and licensing deals. So, besides Splash Villains, what have you been up to this year?

Jaroslav Wieczorkiewicz: It’s been an interesting year. I did a few advertising jobs for an agency in UK. Stuff like liquified paprika for a pharmaceutical company or other spinning yogurts etc. I might share that work in the coming weeks. But I prefer to share bigger projects like SplashHeroes as this is the scale of the assignment where we really shine as a creative team.

In terms of licensing, there are always a few illustrations that are live as ads all over the place. Currently UK, Ireland, Slovakia, China, and USA.

The most recent from last week I am in the talks about a cover for a book. So things are moving but after each premiere of AurumLight calendar I always take time off at least until mid-January, just to keep a healthy balance. Phoblographer: What’s going through your head for the next project? I couldn’t have imagined that you’d do villains, but it makes sense in retrospect.

Jaroslav Wieczorkiewicz: I have a few in mind — I am emotionally invested especially in one of them. However, my wife tells me that it is going to be just too much and I should stretch it for at least two years. If I listen to her voice of reason I think that we will continue the 5 year cycle — there was a sequel to the Milky Pinups from the 2014 now we have SplashHeroes — VILLAINS following the 2015 calendar so we could pick on the Black Calendar and shoot the White edition or go with the Fallen Angels which I still consider my best work to date.

Check out Jaroslav Wieczorkiewicz’s AurumLight Blog to find out more about the SplashHeroes — VILLAINS Edition, which also happens to come as 2020 Calendar.